1,500km north-east of St. Petersburg, Russia’s Arkhangelsk region is characterised by vast coniferous forests of pine, spruce and larch. Along with fishing, forestry has been the province’s main economic driver since the late 1800s – but its traditional timber transport methods are struggling to keep up with today’s demand.

Arkhangelsk Oblast is notoriously remote, with many areas unreachable by road. Instead, the region’s timber transport companies tie the logs together into rafts and tow them along the channels of the Northern Dvina River. These rafts can be of enormous proportions. For Arkhsplav, one of Arkhangelsk Oblast’s leading timber transport companies, a raft can contain as much as 2,500m3 of timber. 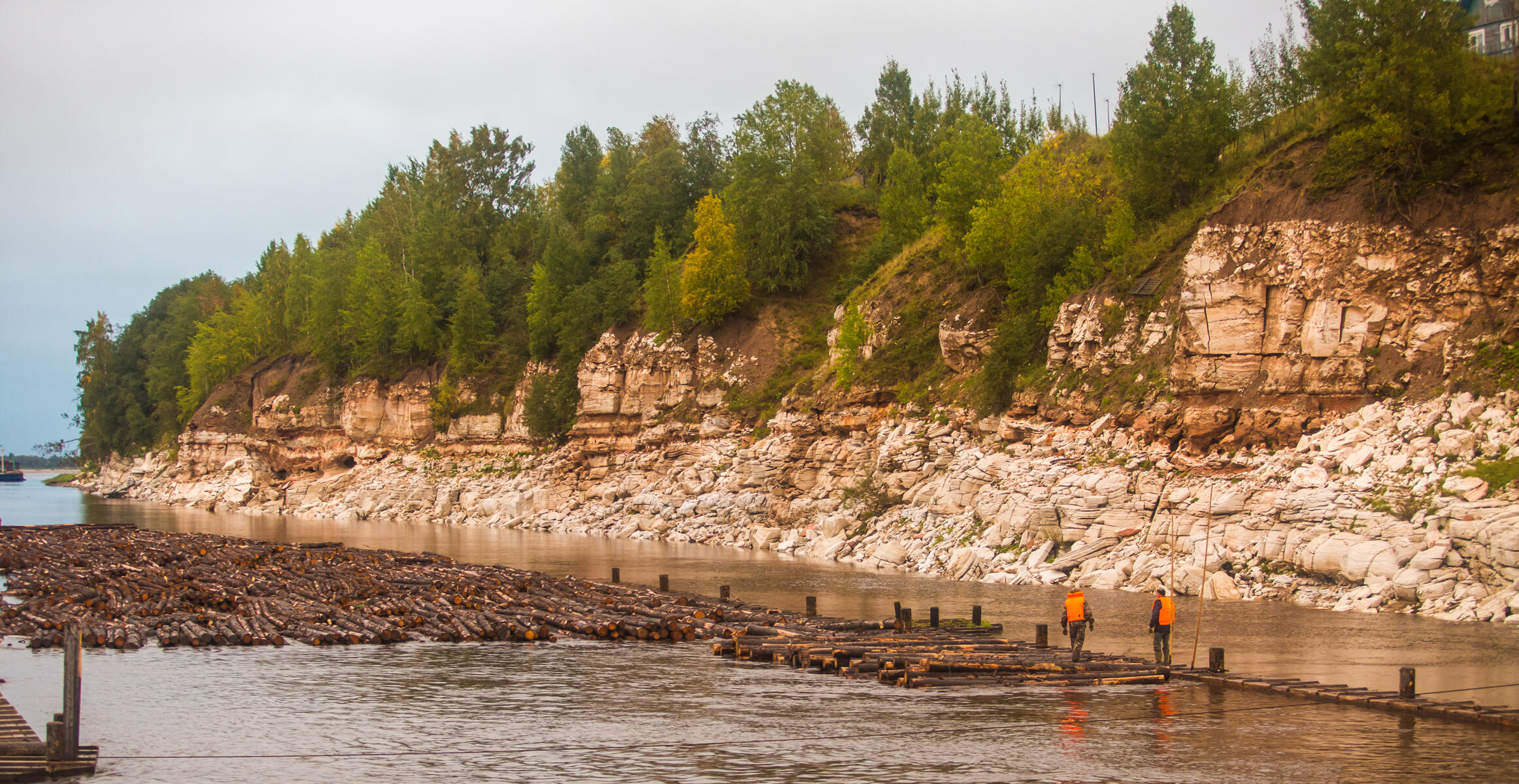 Previously, the company would assemble the timber rafts using floating cranes but the fleet was ageing and costs were mounting. In 2014, Arkhsplav contacted Volvo Construction Equipment (Volvo CE), looking for an alternative that could bring its loading operations into the modern age.

Through the Volvo dealer network and in collaboration with qualified partner organisations, Volvo CE offers customers the chance to modify its proven machines to create special application solutions, tailored to their specific needs. The solution in this instance was a Volvo EC250 crawler excavator with a modified 20m boom working in tandem with a L120 wheel loader – both fitted with grapple attachments.

Arkhsplav’s founder Aleksander Fedulov was involved in the design of the EC250’s custom boom from the start. "I, myself, took part in this first development," he says. "The first version of the boom has been working for three years already." 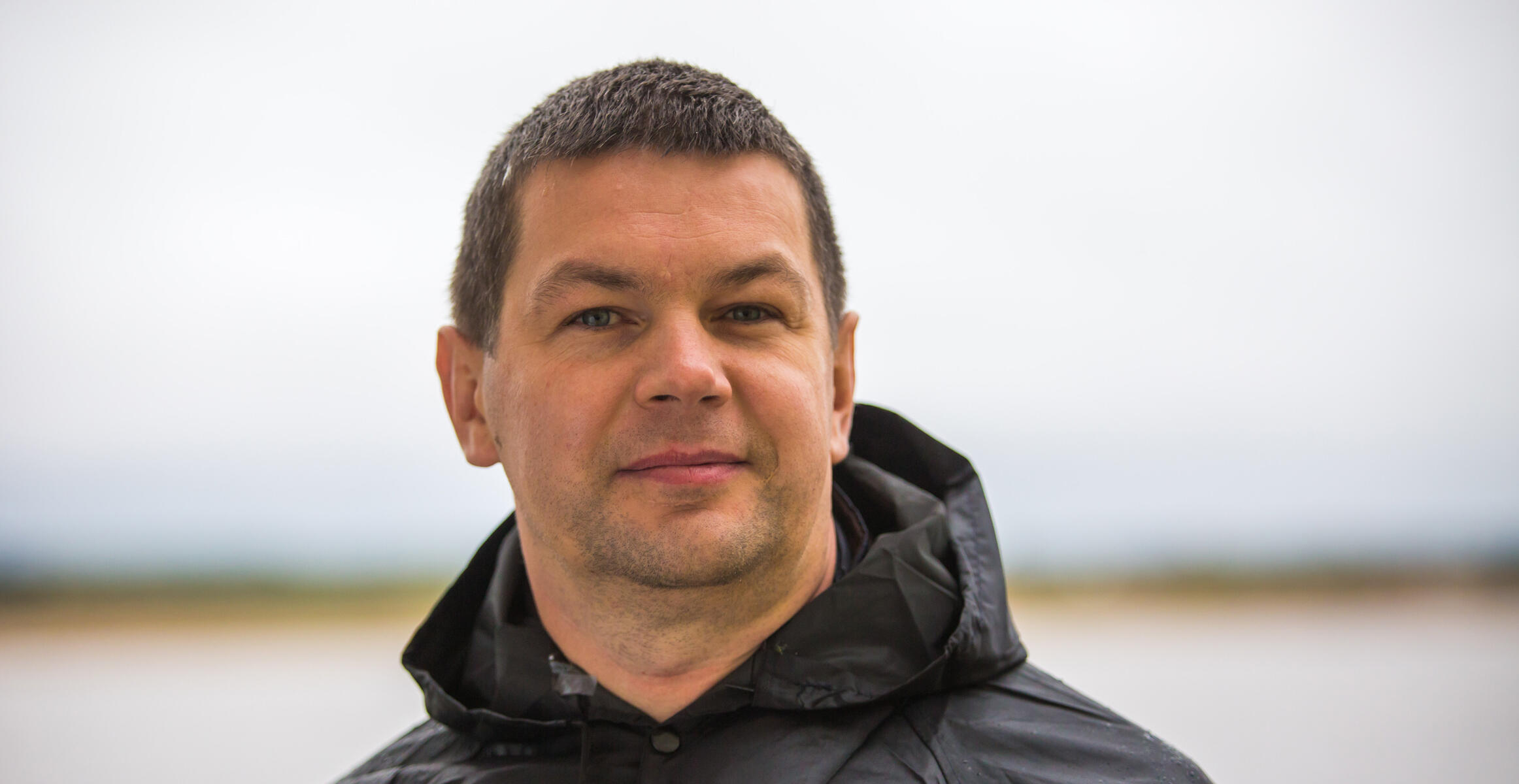 The Volvo L120 wheel loader piles up the logs on the river bank, while the EC250 excavator forms the raft. The excavator crawler tracks are advantageous in improving safety on the unstable ground. "It has good cross-country capabilities," says the EC250’s operator Sergey Lukin "And good visibility – even with a protective grill."

The rest of the floating cranes are still in operation but the Volvo machines have reduced Arkhsplav’s loading cost by five times. The Volvo machines have also boosted productivity. "On average, the floating cranes load on average 100,000m3, whereas this excavator has already done 150,000m3 over the season," Fedulov enthuses. "The peak load in winter was up to 4,000m3 per day and the equipment coped with it. We don’t know its actual limit yet." 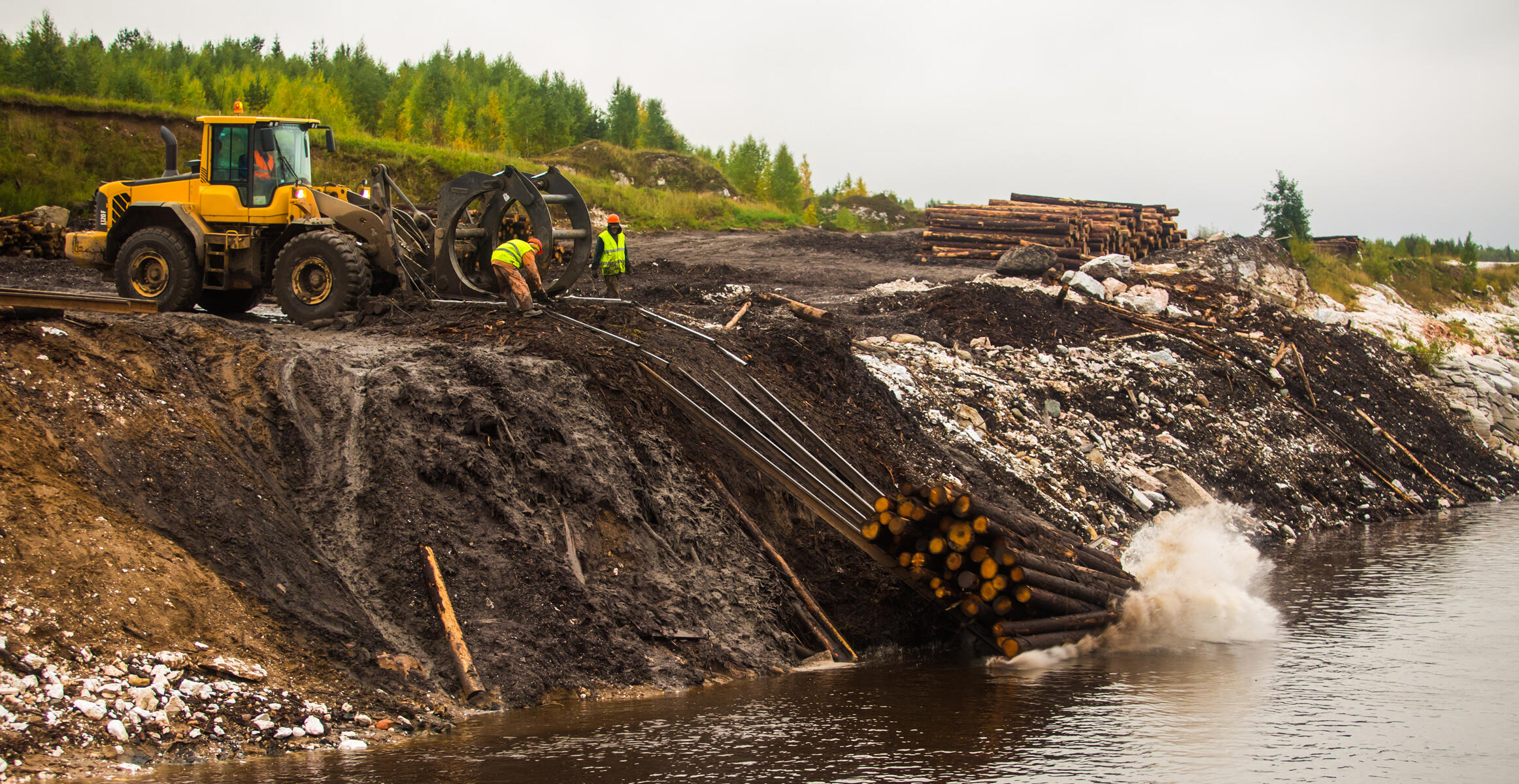 Beyond its sheer practicality, another important part of the equipment’s success is due its high-uptime and fatigue-limiting operator environment. "In general, it does not break down. This is the reliable thing," Lukin says. "It has a comfortable seat and the noise insulation is perfect. The engine works almost silently. The instruments start, you see running digits and you understand that the engine has started." 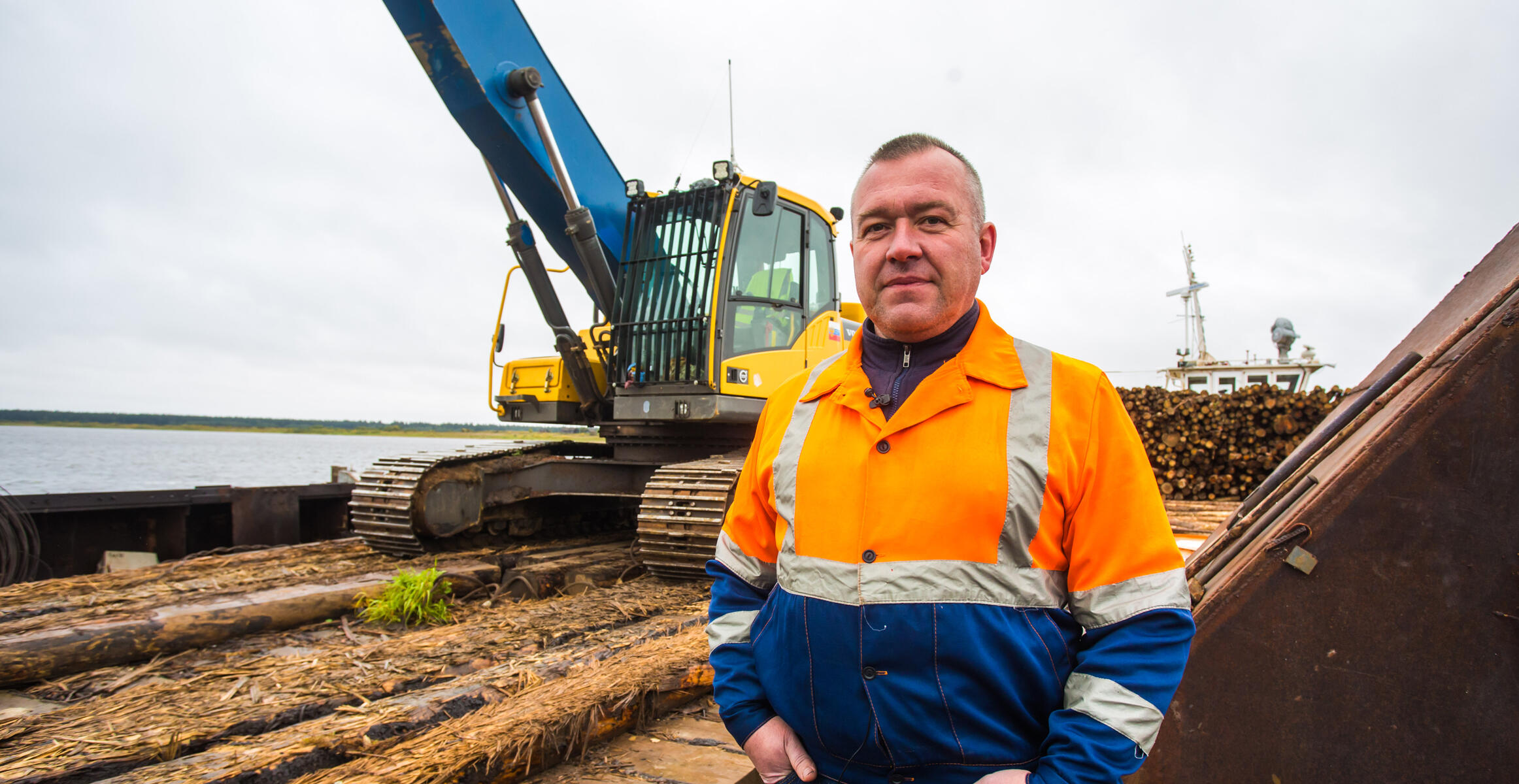 The Volvo machines have also helped reduce idle time during loading and offloading. In the past, Arkhsplav sent two rafts down the river a day. Now it is able to send eight – and new roads have been constructed to support the increase in volume. "Let’s say this has improved production culture," Fedulov asserts.

Given this significant decrease in loading time and cost, there is even talk of a ‘revitalisation’ of timber rafting in Arkhangelsk Oblast. Arkhsplav is planning to incorporate more Volvo special application solution machines into its operations, and excavators and wheel loaders are set to become a regular sight along the banks of the Northern Dvina River – one where tradition meets innovation. 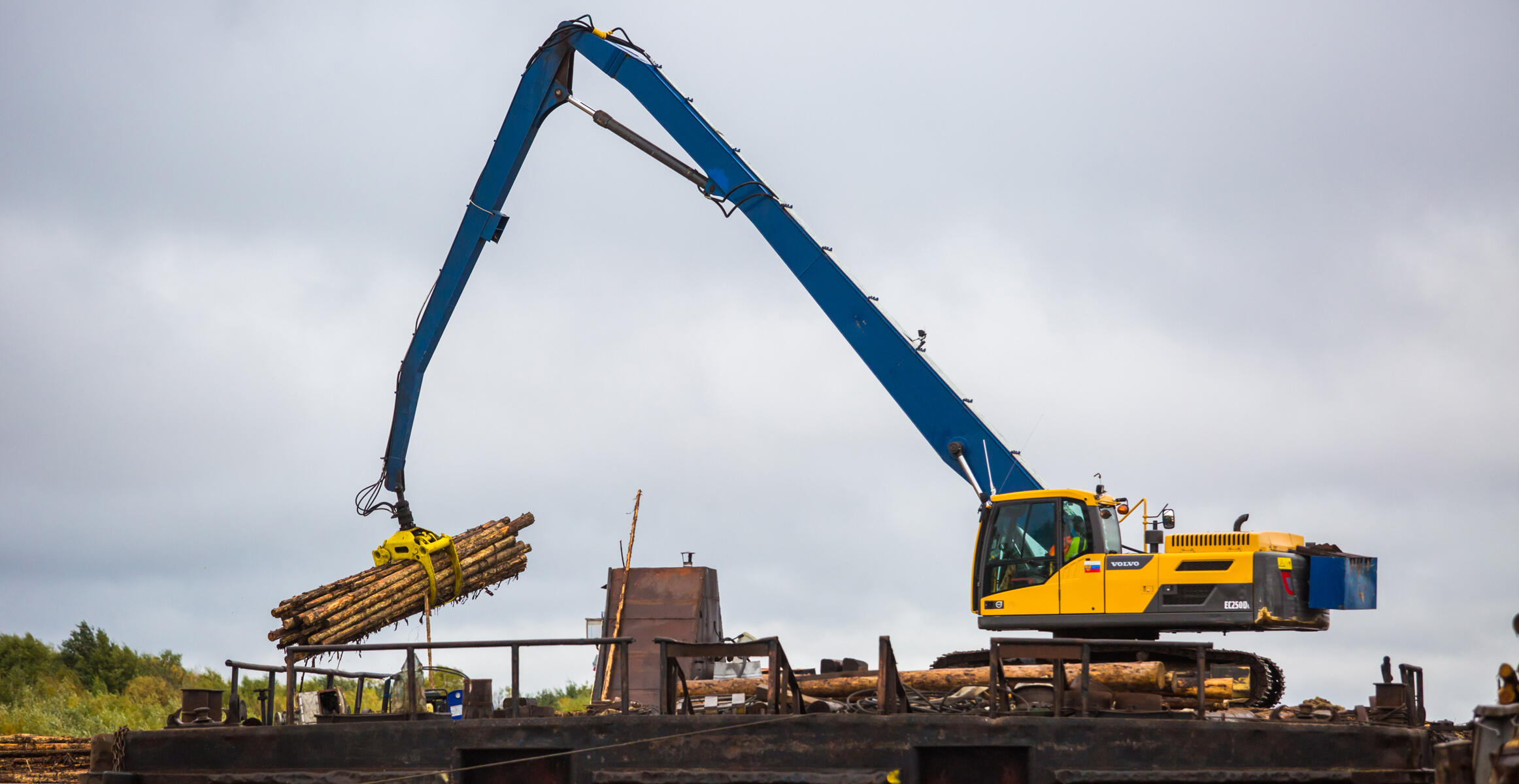 Watch the video to see the Volvo machines in action and hear more customer feedback.

2. Arkhsplav employees check the arrangement of timber logs in a raft.

4. The Volvo L120 wheel loader unloads the logs, reading for arranging in the raft.

5. Operator Sergey Lukin in front of the Volvo EC250 excavator.