The Gold Medal winning Morgan Stanley Garden was constructed with the help of the Volvo ECR25 Electric. But how did the new electric machine perform on such a huge global platform?

The RHS Chelsea Flower Show is renowned for beautiful cutting-edge garden design, ornate sculptures and Royal guests. What is less talked about are the weeks of hard work, creativity and manpower that goes into building these elaborate displays. The team behind the Morgan Stanley Garden, devised by UK designer Chris Beardshaw – last week winning Best Show Garden at the world’s most famous flower show in the heart of central London – arrived with an ambitious aim: to create a beautiful garden with a lighter environmental footprint. A part of which was the Volvo ECR25 Electric on its very first outing since its April launch at bauma Munich.

Ahcène Nedjimi, Electromobility Specialist at Volvo Construction Equipment (Volvo CE), says: “I have been working for a long time on concept machines, but with this project you really get the feeling that you are doing something unique, that electromobility is becoming a reality and that we are sending the clearest possible message that the environment matters. It is a significant moment in Volvo CE’s journey towards building a more sustainable future.” 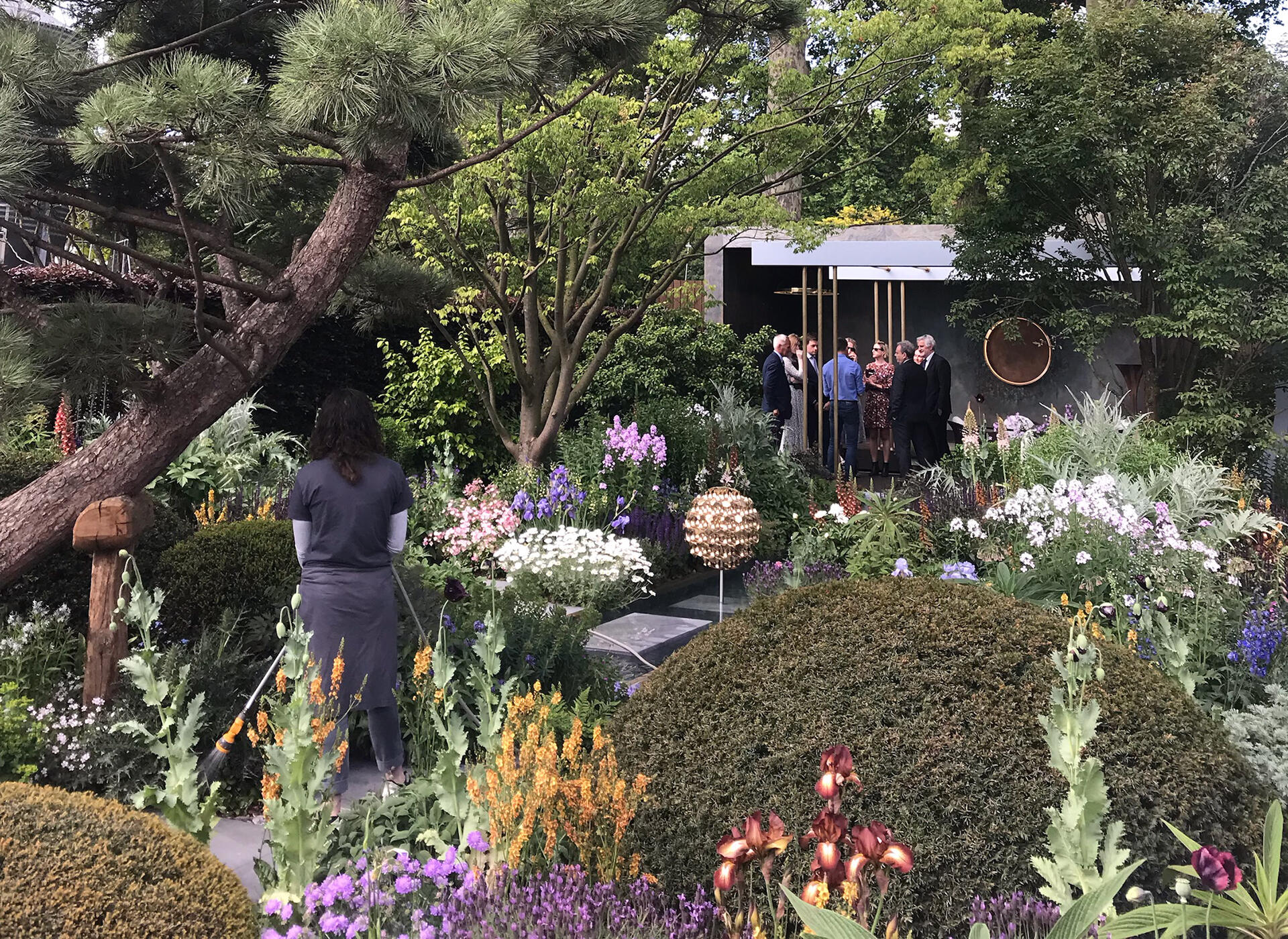 The electric compact machine was in good company at the event. From designer Tom Dixon’s futuristic urban gardening experiment to a woodland family retreat co-designed by Her Royal Highness the Duchess of Cambridge, there was plenty to inspire the estimated 157,000 visitors.

For his eagerly anticipated main show garden, Chris Beardshaw planned for as many environmental features as possible. This included sustainable building materials and tools, ultra-low carbon concrete, glued laminated timber and low energy lights. And of course, the ECR25 Electric compact excavator – the very first electric machine to be involved in the construction of a garden at the RHS Chelsea Flower Show.

The machine produces zero particulate matter, zero carbon dioxide and lower noise emissions – resulting in the garden being dubbed the ‘quietest on site’ by BBC film crews. An additional benefit for landscaping projects such as this is that there are no pollutants emitted that can damage the precious trees or herbaceous borders. It is one of the cleanest possible ways to do all the construction jobs a garden of this stature requires. But can it live up to the productivity levels of its diesel counterparts? 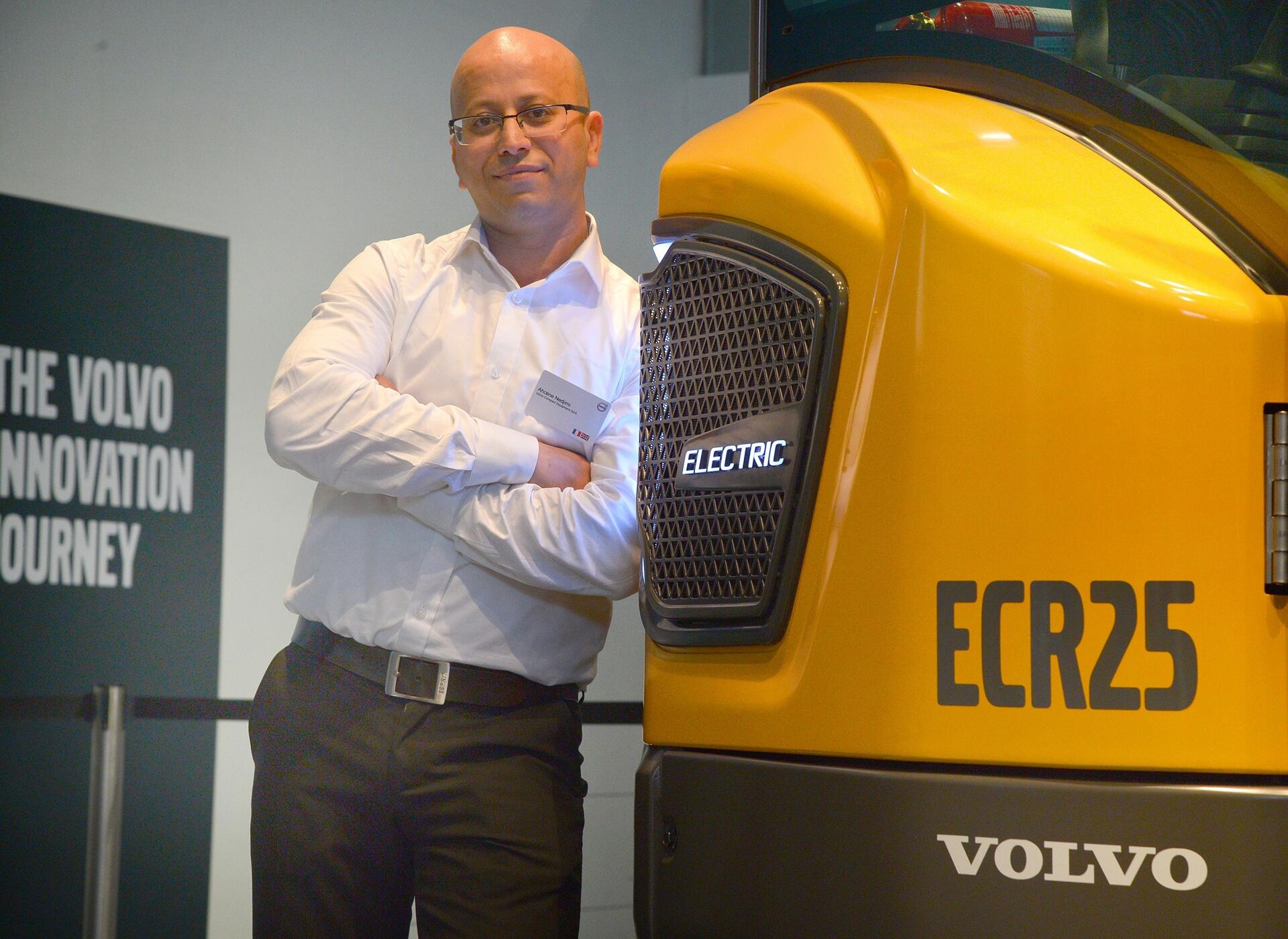 Ahcène thinks so. Not only does it offer the same digging performance as it’s conventional counterpart with less maintenance, but it also does not require any special safety certification. “It is such an intense work zone,” he says “right in the heart of London so it really offered the perfect arena to showcase its unique capabilities for inner city environments.”

The machine was put to work over a week and a half during the extensive build process, where it was used to excavate the site, dig the foundations for the main structure and trench for tree pits and a central water feature. Overnight charging was carried out at the end of each workday in the show’s compound, using a regular household plug socket. When quick charges were required during the day, the operator used the machine’s on-board charger. 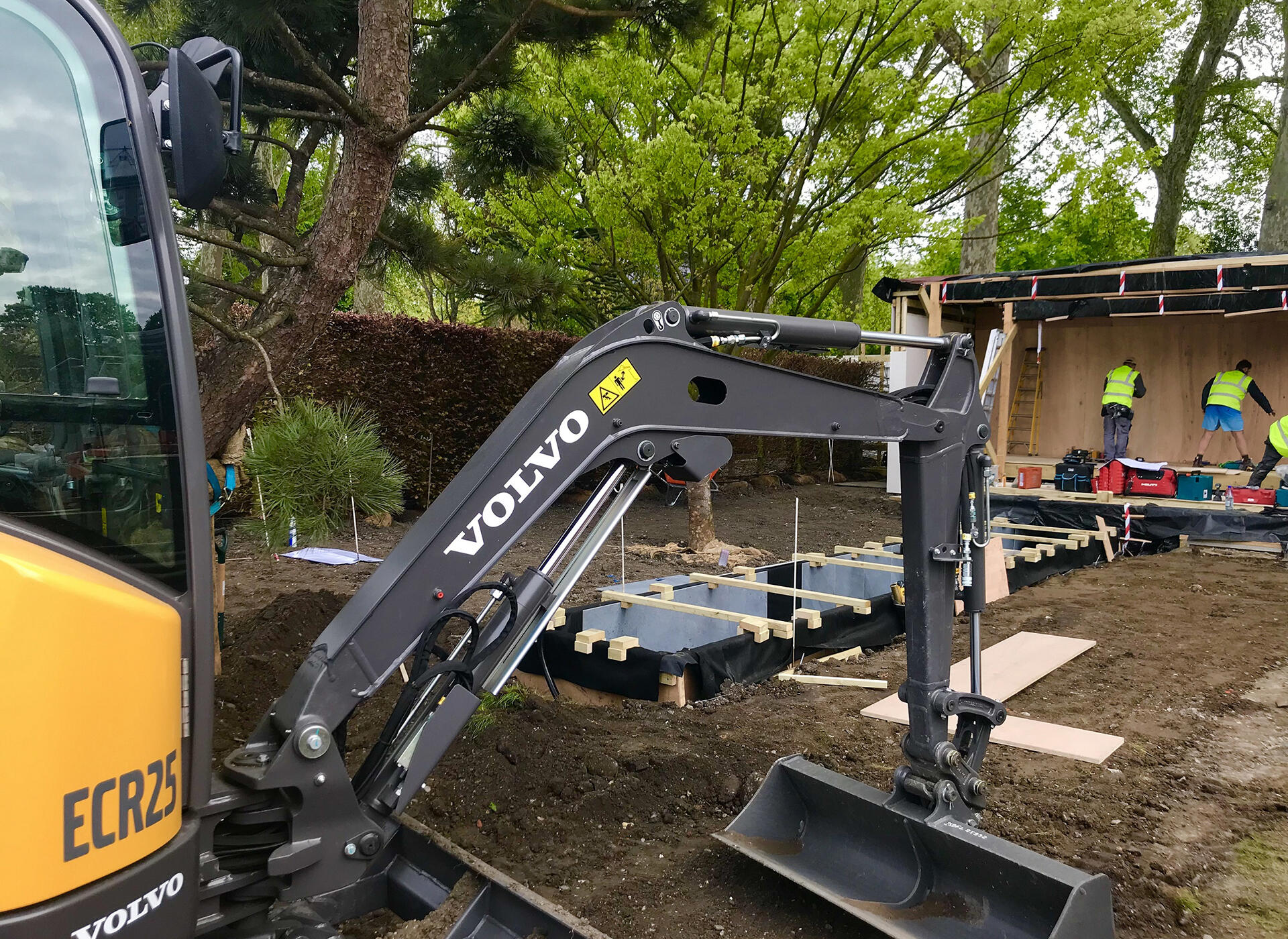 Operator Peter Holmberg fed back that the excavator not only performed the same jobs as the more conventional diesel version, but that the digging feeling was more pleasant and more precise. It also provided a calmer work environment where there were less vibrations in the cab, better air quality and a quieter atmosphere that allowed for clearer communication between workers.


Following this distinguished debut, the electric machine will now go on to take part in customer pilots, where the learnings from the RHS Chelsea Flower Show will be taken forward.

“Zero emissions and lower noise levels is an absolute game changer,” says Ahcène. “The challenge now is to figure out the best way to charge them in a faster way. That’s something we are working on now.”

The launch of the ECR25 Electric came at a significant time for the industry. Cities all over the world are demanding cleaner construction solutions as they strive to reduce their carbon emissions and lower the rate of a global temperature rise. And with construction one of the main contributors to climate change, this machine offers at least part of the solution.

“The question is no longer when, or if, we will have a shift to electromobility, but how fast it will come,” concludes Ahcène. “We are really at the tipping point with no point of return. We need to emit less, pollute less and build the world we want to live in.”