Since its founding in 2014, Walden Hill has focused on putting nature, animals and people first through sustainable forestry and other environmentally friendly practices on their 400-acre farm in Massachusetts.

Now, they have a machine to support their philosophy. Walden Hill, which placed the first North American order for a Volvo ECR25 Electric compact excavator, received the new fully electric, zero-emission machine in mid-July.

“The delivery of this machine marks an exciting milestone for sustainably powered equipment,” said Stephen Roy, president, Region North America at Volvo CE. “Our compact electric machines stood up to real-world testing in North America and received high marks from the customers who demo’d them. This is the first of many electric machines to be delivered to their owners in 2022.”

Jennifer Milikowsky and her husband, Tylan Calcagni, produce maple syrup and harvest acorns used to feed pigs at nearby farms. The couple also handles the marketing, sales and distribution of the pork from those partner farms.

Their love and respect for nature led them on a sustainability mission, so the opportunity to purchase a machine that could get the job done while running on renewable energy was important to them.

“Minimizing our carbon footprint is critical, so we try to do that with every decision we make,” said Milikowsky. “The thought of buying a diesel machine in 2022 that we would use for a decade or more was hard to accept.

“We did a deep energy retrofit on our 1820 farmhouse, we are exploring a solar installation on the farm, and now we get to take a big step forward in trying to convert our fleet of vehicles and machines to electric.” 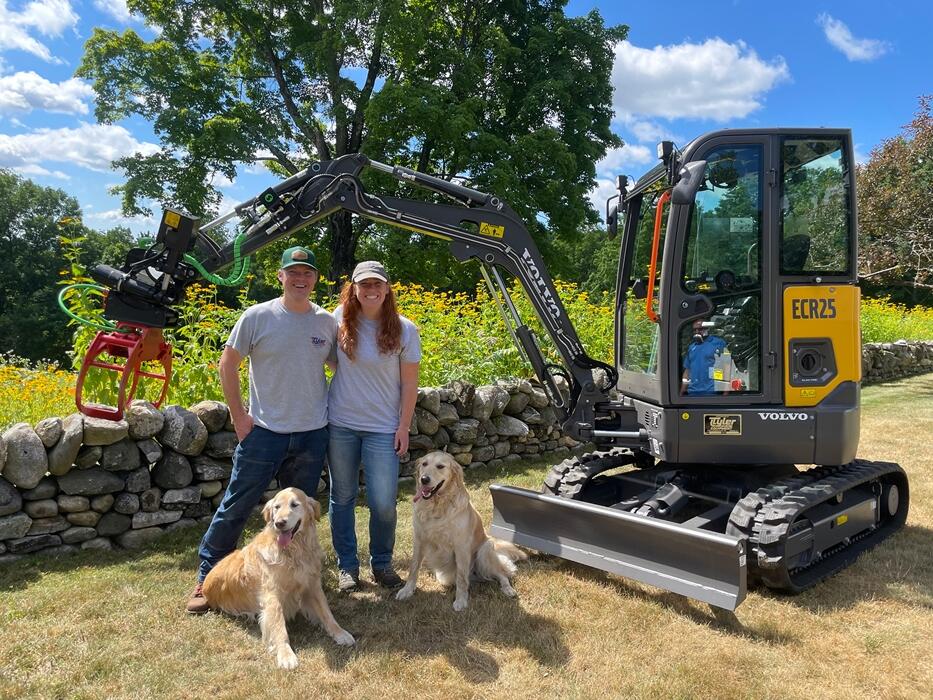 Tylan and Jennifer (and their dogs, Ralph and Daisy) with their new ECR25 Electric compact excavator.

Walden Hill purchased the electric excavator from their local dealer, Tyler Equipment, and financed it through Volvo Financial Services (VFS).

“It wasn’t really a matter of them needing to think about it — it was such a clear fit for their plan,” he said. “They can use it to clear pastures, remove stumps, maintain roads and ditches … all kinds of things.”

“Anyone who owns or works on a small family farm knows that the daily list of jobs is as diverse as it is long,” Calcagni said. “This excavator might help us put in a culvert under a forest trail one day and help us do site prep for a new sugar house the next. We’re so excited to have this versatile machine at our disposal.”

The right tool for the job

The ECR25 Electric offers more than 5,000 foot-pounds of breakout force and can work four to six hours on a full charge in most applications.

“Previously, we would rent an excavator or Tylan would try to figure out how to use our tractor to get a task done,” said Milikowsky. “We realized it’s just so much better if you have the machine for the job. He was spending five hours doing a job that could take him an hour if he had an excavator!”

Other perks of the ECR25 Electric compared to a diesel machine include simpler maintenance, much quieter operation and zero emissions — especially important when working near so many plants and animals.

“For technology to become mainstream, you need early adopters who demonstrate interest and provide feedback on it,” said Milikowsky. “We’re thrilled to be those early adopters for the electric excavator, and we hope it’s just the beginning of a bigger transformation in the industry.”

Learn more about the electric lineup from Volvo CE.