With the help of Volvo excavators, a waste-to-energy facility in Pennsylvania is undertaking significant site improvement efforts to lay the foundation for enhanced site safety and efficiency as well as establishing the infrastructure needed to manage increased waste capacity in the future.

Volvo excavators are working to improve a waste-to-energy facility in Pennsylvania.

According to the U.S. Environmental Protection Agency (EPA), using waste-to-energy facilities reduces greenhouse gas (GHG) emissions from waste management activities. The agency estimates that for every ton of waste processed at a waste-to-energy facility, emissions of approximately one ton of carbon dioxide equivalents (CO2e) are avoided. In 2016, the York County Resource Recovery Center (RRC) processed 431,412 tonnes of waste. This means that GHG emissions of approximately 431,412 tonnes of CO2e were avoided.

In the mid-1980’s, construction of the Authority’s waste-to-energy facility began, and in 1989, the RRC began processing municipal solid waste. Today, the RRC serves the waste management needs of more than 443,000 residents and also processes compatible residual (industrial) waste. The RCC converts waste into a smaller volume of ash and produces clean, renewable energy. Since the facility began its operations, more than 11 million tonnes of municipal solid waste have been converted into five million megawatt hours (MWh) of energy.

To continue to ensure the facility maintains high performance and safety standards, as well as reliable operations for decades to come, the Authority and Covanta York Renewable Energy Systems (Covanta), operator of the RCC, announced the extension of their long-term operation and maintenance agreement in 2015 through to 2035. 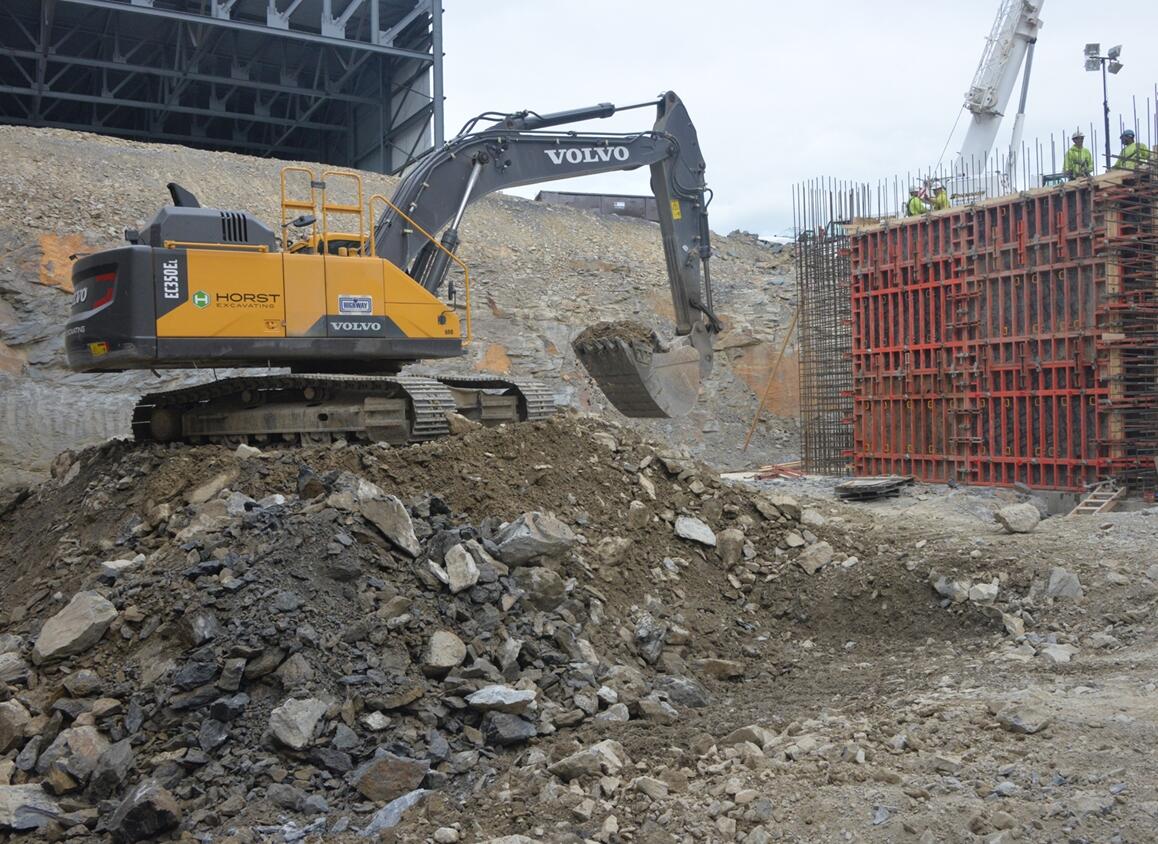 A Volvo 3.5 yd3 bucket is fitted to the EC350E, providing consistent power and high breakout force to load the blasted rock.

Horst Excavating was given the task of earthwork and site preparation on the four-phase project. This includes overall sitework, site demolition, erosion and sedimentation, underground utility work and stone and asphalt paving. In total, they will move more than 300,000 yd3 of material.

Established in 1961 as part of Horst Group, Horst Excavating carved out a name for itself in the industry as an earthworks expert. The company specializes in sitework, underground utility service, land clearing, demolition, soil remediation and erosion control for municipal infrastructure, commercial buildings, educational facilities and windfarms.

“Construction on the three year site improvement project began in 2015 and we’re now in the third phase,” says Brian Kane, vice president of Horst Excavating. “Next, we will construct the expanded refuse pit, including retaining walls and crane bay extension.”

No time to waste

Though progressing at an impressive speed, the site improvement project is happening while the facility is still operating 24-hours a day, 365 days a year, which poses a challenge for Horst when excavating the pit. “To expedite the process, we detonated explositves in the pit, making the excavation more manageable,” explains Kane. “As this is a 24-hour operation, we made more, smaller shots to minimize vibration.”

Working to excavate the material is a pair of Volvo excavators. Horst is mining 30,000 yd3 of rock from the pit, excavating nearly five stories deep. “Right now we are blasting and hammering through a lot of deep, hard limestone,” says Russ Outman, site superintendent for Horst Excavating. “It puts a strain on the equipment, which is running at 10 hours a day non-stop.”

For high quality, durable equipment, Horst Excavating looked to local Volvo dealer, Highway Equipment & Supply. After a trip to the US equipment exhibition CONEXPO in 2014, the company purchased its first Volvo excavators, an EC340D followed by an EC350E. When it was time to replace additional fleet units, Horst called on Highway Equipment & Supply to purchase an EC460C for the expansion project. 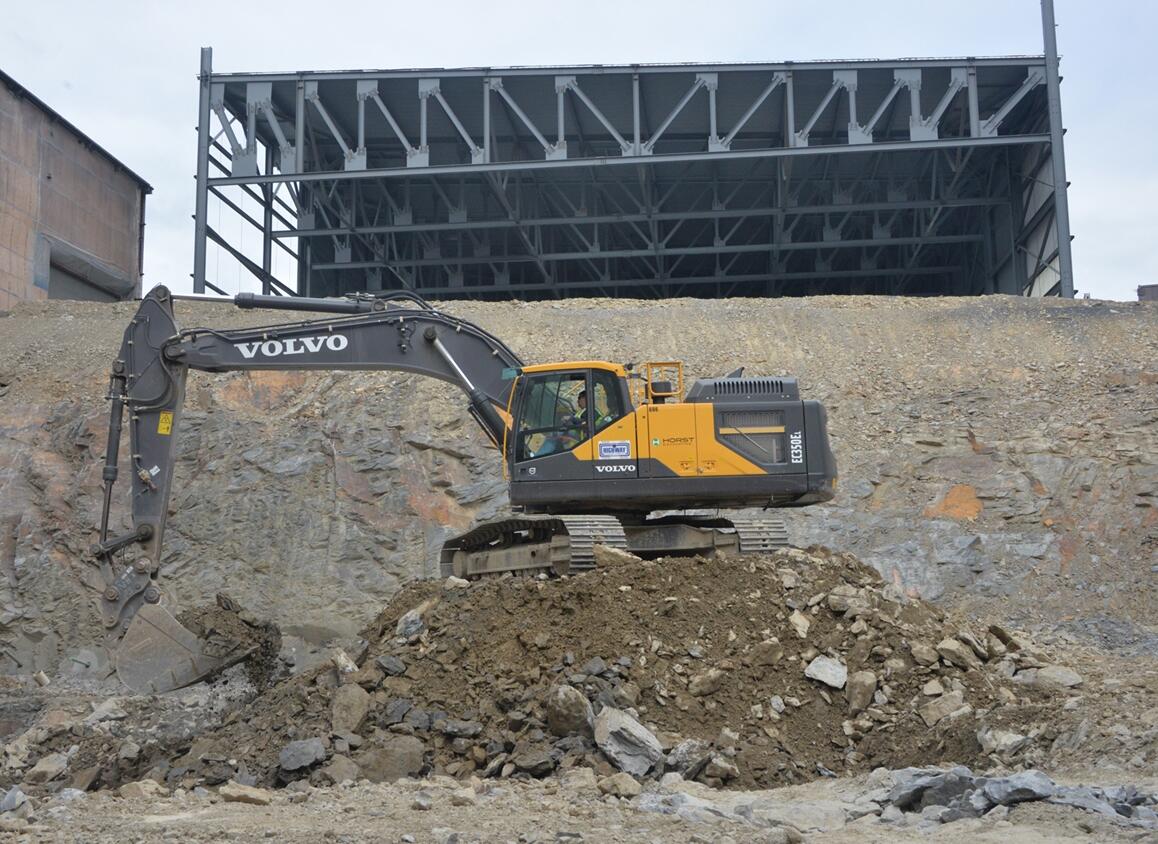 The EC350E excavator is equipped with a high tensile reinforced boom.

The Volvo EC350E excavator is equipped with a high tensile reinforced boom. A Volvo 3.5 yd3 bucket is fitted to the EC350E, providing consistent power and high breakout force to load the blasted rock. The EC460 is also at work on the site, powering a Genesis GH18NPK 8000 lb-ft hammer to chisel large chunks of limestone that frame the pit. “Our Volvo excavators have the right power-to-weight ratio to cover our typical working range,” says Kane.

The RRC saves the equivalent of approximately 13 acres of land a year that otherwise would have been consumed by landfilling garbage. With all three of the facility’s combustion units operating, the RRC generates enough electricity every minute of every day to power more than 20,000 homes. Additional recyclables from the metals are extracted from the ash by-product. To put this into perspective, every 10 truckloads of trash that are managed at the RRC produce one truckload of residual ash.

Volvo CE itself is enjoying the benefits of this facility, with the company’s North American site – in nearby Shippensburg – using it to handle its waste. “Since 2016, we’ve diverted nearly all (90%) of Volvo CE’s Shippensburg waste from landfills, up from 49% in 2014,” explains Scott Robertson, environmental consultant with Waste Management Services. “This has helped Volvo CE achieve a 40% reduction in waste handling costs. In 2017, we finally met our goal of ‘zero landfill’ through an increased focus on recycling and utilizing the Authority for all of our otherwise non-recyclable wastes.”