Engineers at Volvo Construction Equipment made a pioneering breakthrough when they developed OptiShift technology – a technical advancement that delivers up to 15% improved fuel efficiency and increased performance in wheel loaders.

Fuel efficiency often tops the list of demands that customers place on their machines. That’s why Volvo Construction Equipment’s (Volvo CE) engineers are constantly developing clever innovations to make equipment more fuel efficient while reducing emissions and environmental impact – OptiShift is a prime example of this. Sven-Åke Carlsson and Björn Brattberg – the two engineers who developed the OptiShift system – were awarded the Volvo Technology Award 2012 for their outstanding technological achievement and engineering expertise.

Volvo’s unique OptiShift technology consists of two new features – A torque converter with lock-up and free wheel stator and Volvo’s patented Reverse By Braking (RBB) function. The combination of this technology has reduced fuel consumption by up to 15% – as well as increased machine performance. “When a wheel loader carries a load over longer transport distances a lock-up function can reduce the engine revs,” explains Sven-Åke, a retired Volvo CE employee who invented the concept behind OptiShift. 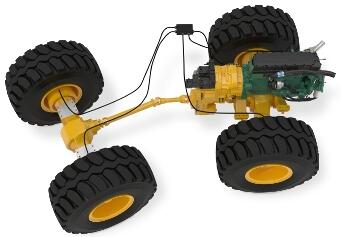 “When lock-up is activated it creates a direct connection between the engine and the transmission – without the aid of the torque converter. With OptiShift the lock-up function is used during a larger part of the work cycle – and that saves fuel. When the operator wishes to change direction, OptiShift senses the loader’s speed, direction and accelerator position and slows the machine by applying the service brakes automatically. This results in faster loading cycles, reduced load on the powertrain, smoother changes in direction and lower fuel consumption. All of this adds up to lower operating costs for Volvo customers and a more comfortable working environment for operators.”

“My contribution to the OptiShift concept was the idea to install the lock-up and RBB function together in one package,” says Sven-Åke, who started working for Volvo CE in 1974 in Eskilstuna, Sweden. “I came up with the idea in 1999 and it was originally based on a need to introduce a torque converter with lock-up to increase machine performance and the efficiency of the transmission.” The project began in 2001 when Sven-Åke was working as a hydrodynamic transmission designer. It involved various different engineering teams including electrical, software, mechanical and hydraulics.

By 2003 Björn, from Volvo CE’s Driveline Mechatronics and Systems Engineering team, was working on engineering the software to enable the torque converter with lock-up and free wheel stator and RBB to work together in a wheel loader. “The lock-up function isn’t new technology – it has been used in articulated haulers and trucks for a long time now,” says Björn. “But before now we haven’t been able to use lock-up in a wheel loader driving cycle. My key input in this project was the control of the lock-up function. I listened to what Sven-Åke wanted to achieve and engineered the software so the technology could be used in a driving cycle – this allows for significantly reduced fuel consumption in applications such as load and carry and transport.”

Sven-Åke and Björn were presented with the Volvo Technology Award by Olof Persson, CEO and President of the Volvo Group. “I know the passion and enthusiasm all our engineers throughout the Group have for their work and it is a great pleasure for me to be able to honor two of them for the development of OptiShift,” says Mr Persson. “In collaboration with their colleagues, the winners have made a pioneering breakthrough by applying high-quality engineering expertise. OptiShift will bring significant benefits to our customers while reducing the impact on the environment.” 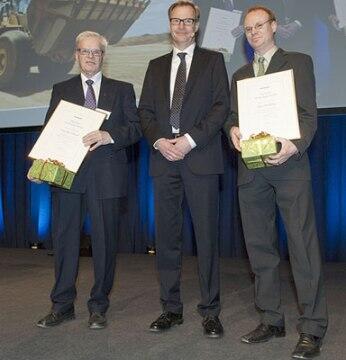 “I appreciate the prize enormously and I am very proud to see that OptiShift is a success,” says Sven-Åke. “From initial idea until production, this was the longest development project I worked on. The first Volvo wheel loaders weren’t launched until the year after my retirement – but winning the award after leaving the company puts a silver lining on my days as a pensioner.” The Volvo Technology Award is the second award OptiShift has received – last year a Swedish magazine bestowed its annual Technology prize on the system.

Send us a message and we will be happy to help you.