The fine art of extracting more value, for longer

‘Rocks and minerals: the oldest storytellers’ goes the saying. And every mineral has its own story to tell. Dolomite for instance, is of sedimentary origin and said to be at least 250 million years old. It is found all over the world in massive beds of sedimentary rock several hundred feet thick. Closer home, nearly a third of India’s dolomite reserves are in the State of Madhya Pradesh. “We have been mining dolomite for years now,” says Vijay Mittal, Managing Director, Mittal Group. “We started out with a single mine. Now, we have four mines, all thanks to our Volvos. They made it possible – ensuring brisk production and achieving set targets on time.”

Headquartered in Katni in Madhya Pradesh, Mittal Group is a diversified Group of eight companies engaged in mining and trading of minerals primarily dolomite, manufacture of refractory materials and wall putty, and construction of prime residential and commercial real estate in Katni. Leading operations at the open-cast mines in Katni are Volvo excavators - two EC210D, two EC210B and one EC360B - along with Breaker and Coupler attachments.

The difference in performance
“These are machines with mighty six-cylinder engines and powerful hydraulics,” says Vijay Mittal. “They have this amazing capacity to move more tons in less time.” He singles out Volvo crawler excavators for their unmatched fuel efficiency, fast cycle times and superior productivity compared to other machines. He believes such a combination works wonders for his business ensuring high outputs with low operating costs, thereby improving business margins. “Just imagine – we achieved 19500 tons of output in one month!” says Vijay Mittal. “But that’s the beauty of Volvo machines. No matter how hard the application or condition, they never let you down!”

He is particularly impressed with the EC210D Excavator. “It may be the smallest in the Volvo CE stable, but it does work big time,” he says. According to him, the EC210D is a robust machine equipped with features that help achieve productivity and efficiency across a range of tasks. He is convinced only Volvo Equipments can take on the toughest mining projects and deliver to complete satisfaction.

A partnership built on trust
Mittal Group has fine-tuned its Volvo fleet for optimum uptime by following proper maintenance schedules. This in turn, has positively impacted both business revenues and profitability. Vijay Mittal is effusive in his praise of Navin Infrasolutions Pvt Ltd, the local Volvo CE dealer. “We share a relationship that goes back a decade. Spare parts or service support – they are always there for us, just in time. Their aftermarket support is most commendable. They have our total trust,” he says.

Mittal Group is looking to the future with renewed optimism. It is looking to expand its mining operations and build further on the diversification theme that has been the hallmark of the Group. Mittal Group is ready to script a new chapter in its success story. It will mean inducting more people and construction equipment. “We will spend some time on the first,” says Vijay Mittal. “Absolutely no time on the second – it will always be Volvo.” He signs off with a smile. 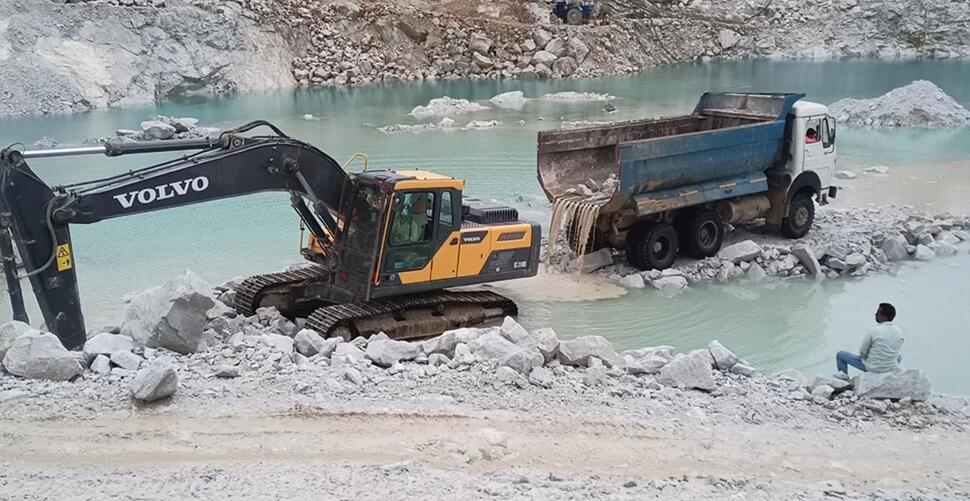 Volvo Excavators in action - round the clock round the year - at the Dolomite Mines of Mittal Group in Katni, Madhya Pradesh