Twelve Volvo EC200D excavators impress on the road to Sumatra

It’s not pulp fiction – twelve of Southeast Asia’s most popular excavators are hard at work in Sumatra, Indonesia, on the maintenance of a road for a paper mill that has received a sustainable forest management certification under the Programme for the Endorsement of Forest Certification (PEFC).

In 1993, before APRIL Group, Indonesia’s leading manufacturer in the paper and pulp industry, began construction of its first pulp and paper mill on the Indonesian island of Sumatra, the sleepy and virtually inaccessible town of Pangkalan Kerinci consisted of just 200 dwellings. Today, it is not only home to one of the world’s largest and most efficient pulp mills, run by APRIL’s main pulp and paper subsidiary Riau Andalan Pulp & Paper (RAPP), but also a thriving city of over 100,000 inhabitants, with a small airport, two ports and over 11,000 kilometres of roads.

The latest addition to these roads – a 80-kilometre stretch between Langgam site and Cirenti site – started in August 2019. To ensure the task stays on the three-year construction schedule, Indonesian contractor PT Sumi Gita Jaya — a major player in infrastructure development in the province, as well as the oil and gas industry — added twelve Volvo EC200D excavators to its fleet, which are working alongside its existing fleet of four Volvo SD110 soil compactors.

The IDR 40 billion project (approximately USD 3 million) has now reached the construction stage, with the twelve new EC200D excavators primarily used for canal and trenching work, working nine hours per day for seven days per week. When completed, the road will provide access to the pulp and paper mill, which is capable of producing up to 2.8 million tons of pulp and 1.15 million tons of paper per year.

“The financial aspects were a key factor in selecting the EC200D, particularly as a result of their competitive price and fuel efficiency,” said Herland, director at PT Sumi Gita Jaya. “But it was also vital that the machines would be durable and deliver consistent high performance.”

As with all of Volvo CE’s new equipment, the EC200D also meets Indonesia’s new requirements for machinery to operate with diesel containing 50 percent biofuel — a year before the deadline. The EC200D excavators are already living up to their reputation.

“Because they are so reliable, we haven’t needed to call on the support of PT Indotruck Utama, the dealer who supplied our machines,” Herland. “And our operators really appreciate the cabin comfort, as well as the impressive swing speed.”

As the fastest excavator in the 20-ton class, the EC200D benefits from the perfect balance of power and fuel economy provided by its Tier 3 Volvo D5E engine, which delivers 123 kW at 2,000 rpm. Ideally suited to general construction duties, the EC200D is equipped with a 5.7 m boom, 2.9 m arm and 0.8 m3 bucket, delivering a maximum breakout force of 116 kN.

Established in 2000, PT Sumi Gita Jaya is based in Pekanbaru, Riau, and purchased its twelve EC200D from PT Indotruck Utama, one of Volvo CE’s local dealers in Indonesia. 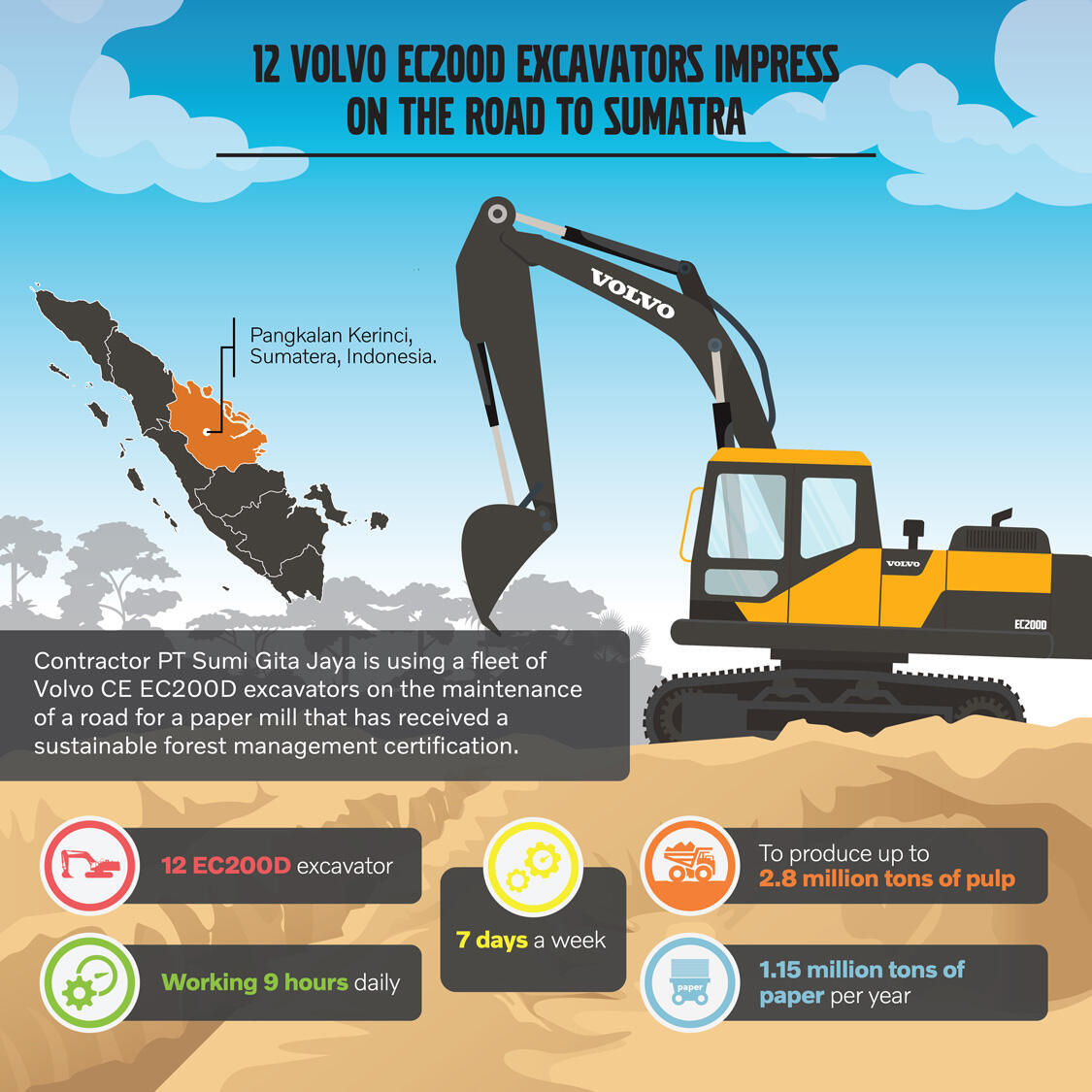