Every mile worth the while

"To deliver 20% higher productivity and 15% savings on fuel consistently over years is no joke. Take it from me - if it’s road building, it’s got to be Volvo.” Says Shailendra Singhal, Managing Director,Agroh Infrastructure Developers Pvt Ltd

The champion road builders of them all, it is said, were ancient Romans. At their height, the Roman Empire maintained an amazing 85,000 kms of roads across the heart of Europe and way beyond, encircling the Mediterranean area. Roman roads were famous for their straightness and engineering excellence. “Much like ours,” says Shailendra Singhal, Managing Director, Agroh Infrastructure Developers Pvt Ltd. “And I can tell you, we are champions when it comes to road building in the heart of India - Madhya Pradesh.”

Agroh Infrastructure Developers Pvt Ltd is a fast growing construction conglomerate clearly focussed on creating superior infrastructural assets at both state and national levels. Incorporated in 2001, the Company has grown in strength over the years to emerge a leading player in road building, highways and bridges in Madhya Pradesh. The Company has pioneered several BOT Projects in the State with resounding success. 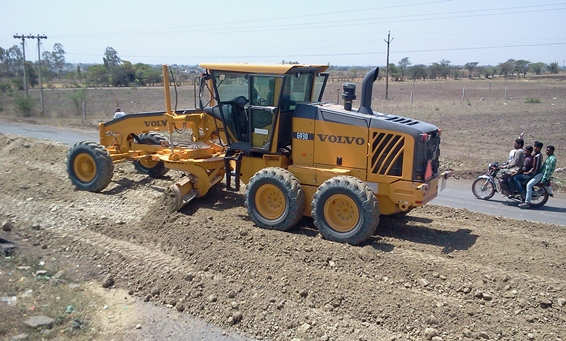 Great to be on the road

Agroh Infrastructure employs a fleet of heavy-duty Volvo Construction Equipment at its various projects. These include an EC210 Excavator, three SD110 Soil Compactors, two DD100 Tandem Rollers and a G930 & G710 Motor Grader. “They have served us for over six years now,” says Shailendra Singhal. “Very, very well, I assure you.” Agroh Infrastructure was first introduced to Volvo by VolvoCE Channel Partner, Navin Infrasolutions Pvt. Ltd. The promise was - improved productivity with lower fuel consumption. It is clear the Volvos have delivered big time on both counts.  As Shailendra Singhal puts it, “To deliver 20% higher productivity and 15% savings on fuel consistently over years is no joke. Take it from me - if it’s road building, it’s got to be Volvo.”
According to him, a typical Volvo works long and hard with minimal breakdowns which is a definite plus in his business where margins often come under pressure. He likes the fact that there is no compromise on safety and comfort in a Volvo - his machine operators love the work. And he is effusive about the aftermarket support provided by Navin Infrasolutions. “The ways these guys run the show is quite amazing. Ask for any spare part or  service solution and you get it - right on time.” All in all, Shailendra Singhal likes the package immensely. “The product is great, the performance brilliant and the team excellent. We really enjoy the VolvoCE experience,” he says.

Sprinting to the forefront

Agroh Infrastructure is looking to the future with renewed hopes. It aims to be up there as one of India’s best known construction firms. It seeks to expand well beyond State borders by actively pursuing challenging  road projects pan-India. Shailendra Singhal knows exciting times are ahead. Just as the country is on the verge of a ‘growth break-out’, he believes, so too is his Company. “And with a fleet of Volvo equipment by your side, there’s no telling how far you can go,” he signs off with a smile.