From Our Roots. Naturally

Volvo plays a key role in the birth of Canada’s newest marble quarry.

The west coast of North America has always been a source of intrigue, exploration and unbridled com-merce. From the time that Sir Francis Drake explored the coasts of California in 1579 and Captain James Cook landed in British Columbia’s, Nootka Sound in 1778, the wild west has always been a magnet for prospectors, miners and business entrepreneurs. Many were very keen on harvesting the natural resources of each region.

Following Cook’s exploration of the British Columbia coast line, the Spanish established a naval post in Nootka Sound in 1789. Known locally as Santa Cruz de Nuca, this outpost very quickly became an im-portant focal point for the lucrative English, Spanish and American maritime fur trade. Following the downsizing of the fur trade, fishing and forestry became the main sources of income in the area.

This remote, mountainous area of British Columbia’s Vancouver Island is the traditional territory of the Mowachaht/Muchalaht (Nuu-chah-nulth) First Nations people. Santa Cruz de Nuca later reverted back to its Nuu-chah-nuth name of Yuquot which translates to “Where the wind blows from many direc-tions”… indeed, a very fitting title. The area is only accessible by boat, helicopter or float plane.

British Columbia is Canada’s most westerly province with a rugged Pacific Ocean coastline stretching from Washington State north to Alaska. 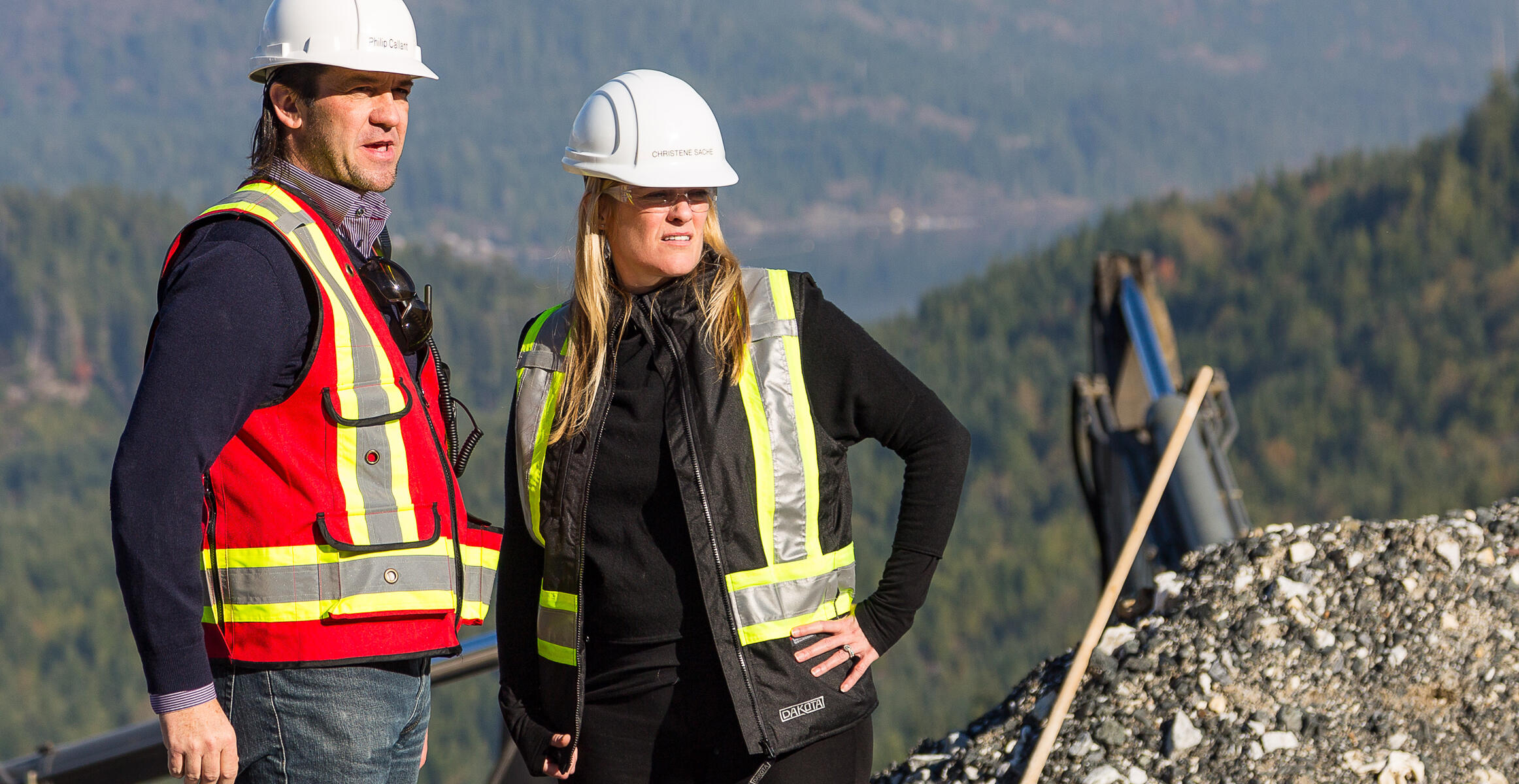 It is to this history-rich, remote, craggy, rugged, but scenically beautiful area that two modern-day pro-specting entrepreneurs came in search of the illusive and highly sought-after stone known as marble. Belgium-born, Philip Callant, a man with a self proclaimed ‘nose for valuable stone’ and his Canadian partner, Christene Sache, spent several years researching, bushwhacking and exploratory test drilling on the Mowachaht/Muchalaht traditional territory. But before Philip and Christene considered staking claims in the area, they established key personal and working relationships with the local Mowachaht/Muchalaht peoples. Following this, they staked mineral claims to over 2,600 hectares of jagged Pacific Coast mountains with estimated amounts of marble to keep quarrying active in the area for up to 300 years.

It was just a few kilometres east from Yuguot and a little south of the small community of Tahsis, that these two ‘prospectors’ discovered large deposits of white, blue and green marble. Marble of a quality that meets or exceeds that found in the world-famous quarries of Carrara, Italy. This was the birth of Canada’s newest, premier marble quarry, Callache Stone Quarries. Currently the quarry is only accessible via rough forestry service roads or by helicopter.

Marble: What Is It?

Marble is a semi-precious, metamorphic rock, the result of thousands of years of the earth’s natural heat-ing and pressure as well as the introduction of chemical components to sedimentary carbonate rocks, most commonly limestone or dolomite. Pure white marble is the result of the metamorphism of a very pure limestone. The characteristic swirls and veins of many coloured marble varieties are usually the result of the presence of various mineral impurities such as clay, silt, sand and iron oxides originally present as grains or layers in the limestone. Marble is globally sought after as a valuable base for sculp-tures and as a building material.

The quarrying or harvesting of marble in Canada is a relatively small industry in comparison to the country’s total commercial production of natural stone. However, world-wide demand for high quality marble continues to grow. 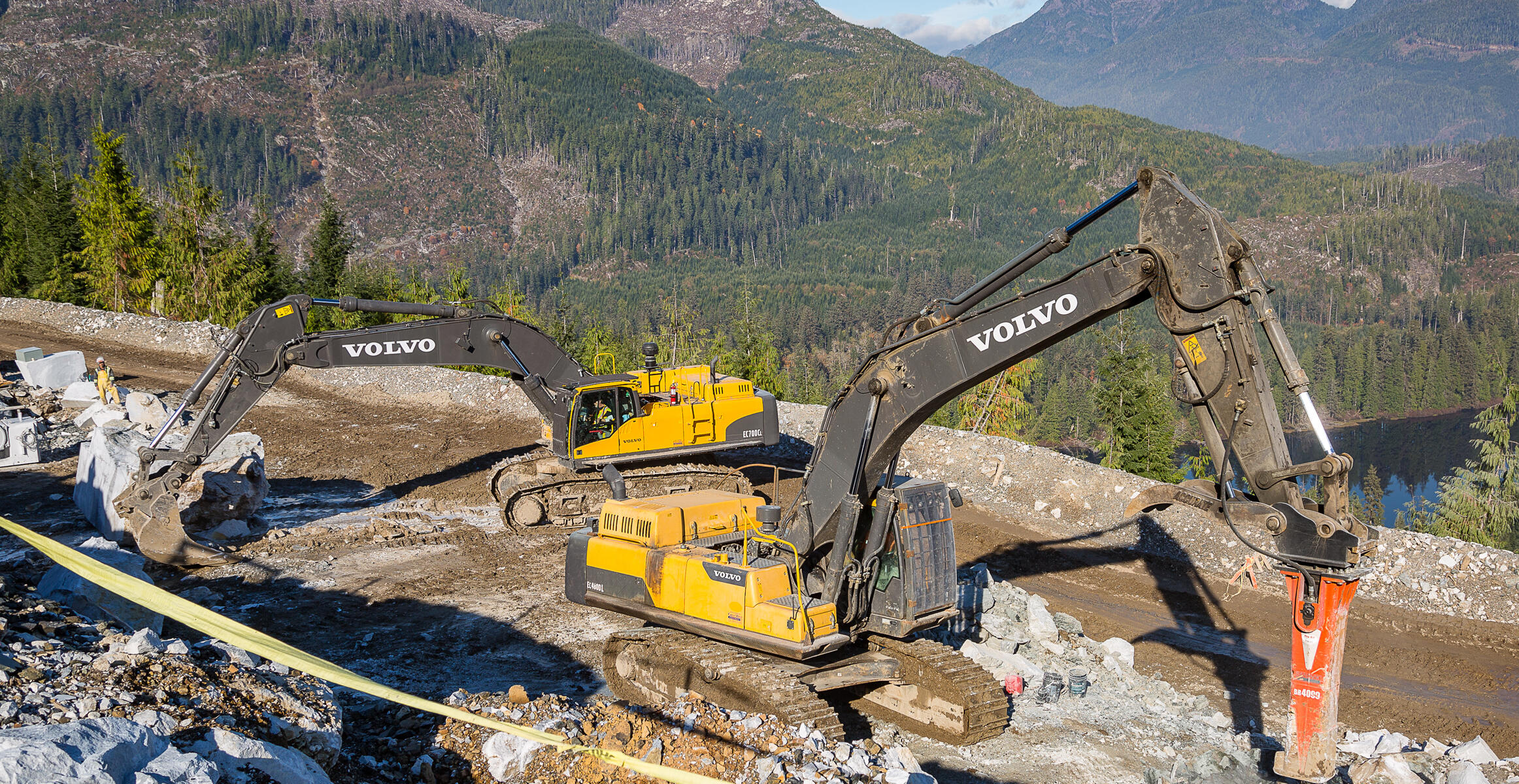 Okay… so Philip and Christene discovered a wonderful source of high quality marble, but now… how to get it out of the mountain and to their global customer base? That is where Volvo Construction Equipment along with Volvo Finance and their B.C.-based dealer group Great West Equipment entered the picture.

“In our travels around the world, we became very familiar with Volvo and Volvo quality,” stated Philip Callant. “But we were a startup company and many equipment companies and financiers were hesitant to do business with us.” He continued, “While Christene and I were exploring the area, we had met Doug Meir the general manager of Great West’s Campbell River store and were quickly able to establish that the Great West team along with Volvo and Volvo Finance were willing to work with us.”

The company had to start out with smaller equipment, for two reasons. Firstly, the area where the first marble was available was steep and cramped. Secondly, there were no roads into the area that were compatible to bringing in large pieces of equipment. The first piece of equipment purchased was a Volvo EC480D tracked excavator and a short time later a Volvo L350F wheel loader was added.

Today, Callache Stone Quarries owns seven pieces of Volvo equipment including three crawler excava-tors, the original EC480D and an EC700C and an EC35D compact excavator. A pair of L350F wheel loaders. An A35C articulated hauler and their recently acquired G976 motor grader. All are financed through Volvo Financial Service and all are on Volvo Service Contracts with ActiveCare Direct. 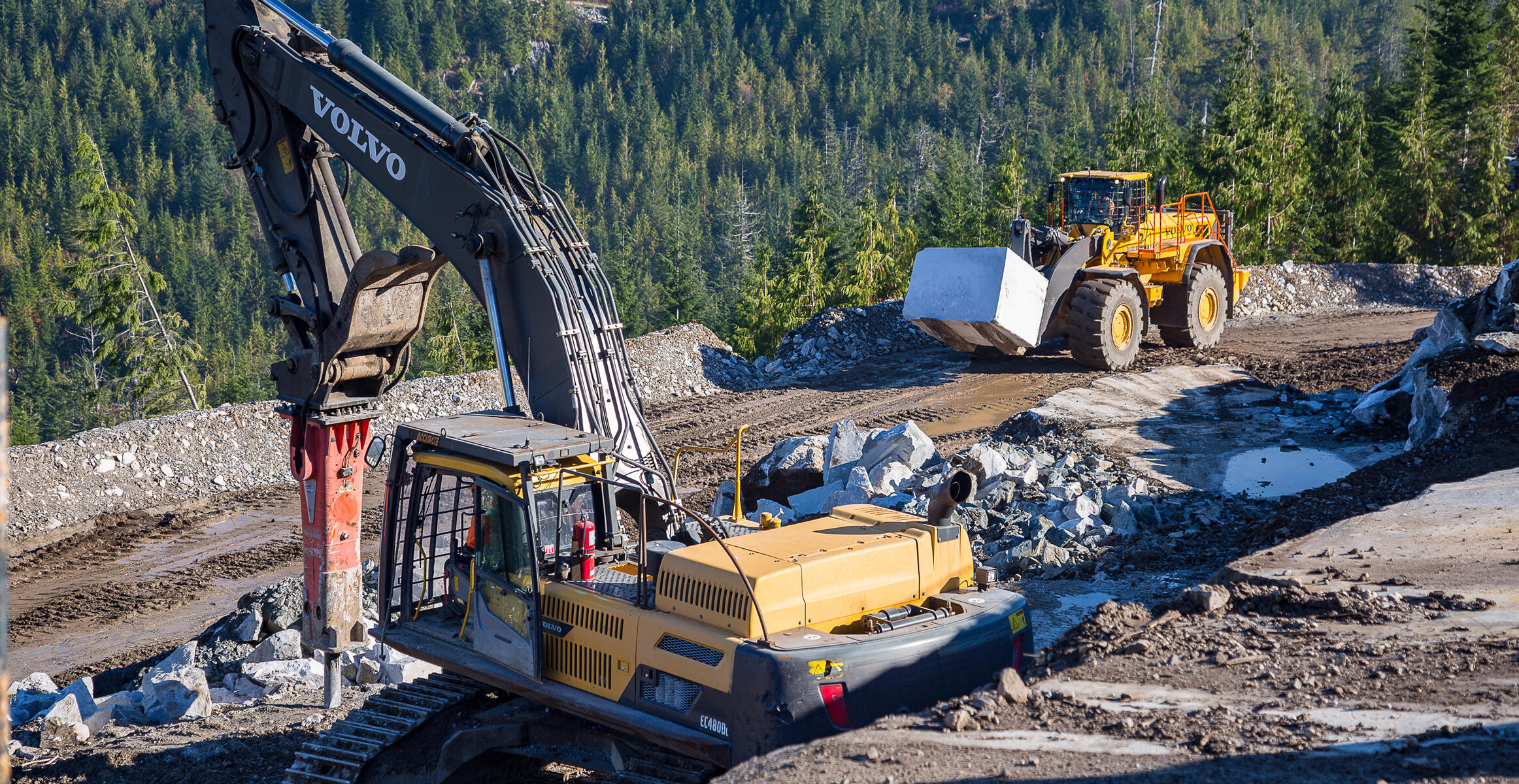 How To Get It There…

Scott Cairns, Regional Manager for Great West Equipment, explained that getting the larger pieces of equipment onto the Callache quarry site was not an easy task. For example, the new, over seventy-five ton, Volvo EC700C crawler excavator had to be brought to Vancouver on two transport trucks from Great West’s Fort St. John, B.C. location, a distance of over 1,240 kilometres (770 mi). Then via ocean barge to their Nanaimo facility, where it underwent a few minor ‘quarry ready’ modifications. Then it was reloaded and trucked to Gold River, another 250 kilometres (155 mi). Here it was assembled and ‘walked’ onto another barge that was pulled via an ocean going tug along approximately 80 kilometres (50 mi) of rugged B.C. coastline to a landing site close to the quarry. But the 700’s journey was not over yet. This new Volvo excavator was then ‘walked’ another few kilometres to the quarry before it could go to work. Time consuming yes. Worth it? Most definitely.

This time consuming process will change now that the Callache has taken delivery of a Volvo G976 six-wheel-drive motor grader, which will play a key roll in some serious and much needed road upgrades.

Now getting huge 25 and 35 ton blocks of high quality marble to customers globally follows much the same path… but in reverse. Once cut, measured and graded, the marble blocks are carefully loaded onto an off-road truck in the quarry using the Volvo wheel loaders. Then they are driven a few kilometres to a decommissioned oceanside forestry log-sort landing where they are loaded onto a barge. They are then barged to Gold River where they are carefully packed into sea containers and reloaded onto an ocean capable barge and taken to Vancouver. From there, various methods of shipping are used to get these very valuable blocks of marble to processing facilities around the globe.

“We did our research and knew that Volvo had the right equipment for us,” explained Christene Sache. “We don’t have a lot of room up at the quarry site yet so the equipment has to be compact, but we have to get maximum performance out of our machines as well. We are constantly handling 20 to 35 ton, and often larger, blocks of marble.”

Philip continued, “For me it was a no brainer. Volvo for us was the leading supplier of equipment. The performance we get out of the 350 heavy-duty block-loader (wheel-loader) and the 700 and 480 (exca-vators) we have, if we just looked at the footprint of the machine itself, each machine is easily 10 to 15 percent smaller than its nearest competitors. And then you put onto that compactness, maneuverability and agility of the machines and then add in consumption… we are running consumptions which are be-tween 20 and 34 percent less than its biggest competitor. Then the service that we get from Great West… I have to say it is a walk in the park to go with Volvo and to see our production running as smooth as is possible.”

But compact power and fuel savings are just part of the Volvo performance equation. Not only are the machines working in the close confines of the quarry, they have to contend with mother nature as well. This rather inhospitable area on the Pacific west coast, ‘where the wind blows from many directions,’ also receives up to four metres (157 in) of rain annually. When asked, Trevor Bergh, Operations Man-ager was very emphatic, “We are very happy with Volvo. They handle this varied terrain with ease, good performance, easy maneuverability, fuel consumption is lower than the competitors… which is a bonus. They don’t seem to have any issues with being out in the rain, the cabs are comfortable and quiet. The operators like them. They are excellent machines for our needs.”

Christene Sache concluded, “One of our biggest challenges was finding the right people to perform in our Volvo ballet and expertly and safely harvest the marble and get it to market. We have been lucky to be able to find an Italian quarry master specialized in marble extraction, skilled Canadians with mining expertise and are working very closely with the Mowachaht/Muchalaht First Nations to train their people in the fine art of marble harvesting.” 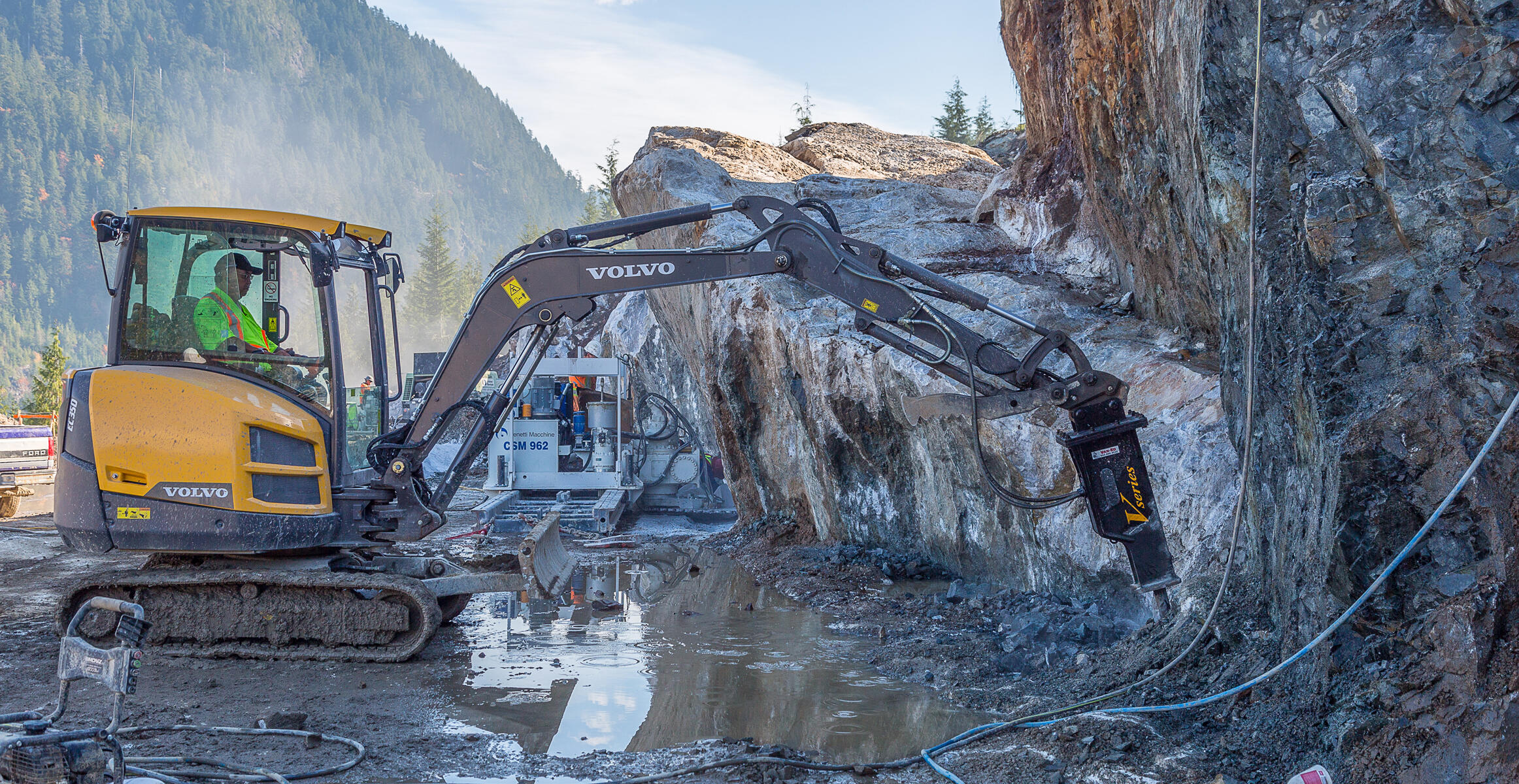 So What Is Missing…

Let’s take a closer look. Canada’s naturally, rugged, mineral-rich west coast. Two young and dynamic mining entrepreneurs. The birth of the country’s newest and potentially largest marble quarry. Marble of a quality that rivals that found in Italy. Enough marble to potentially last for 300 years of continuous harvesting. Positive global acceptance of and demand for the high quality product. A close working rela-tionship with the local First Nations people. Volvo Construction Equipment with an endless supply of just the right machines. Volvo Financial Services willing to work with a new startup. Outstanding service and follow-up by Great West Equipment…

So what is missing? Could it be a young Canadian Michelangelo? The First Nations peoples from this area are famous for their beautifully sculpted wooden totem poles and soap stone carvings…could it be? Certainly if that were to happen… it would be a natural progression with very deep roots.

The west coast of North America has always been a source of intrigue, exploration and unbridled com-merce. From the time that Sir Francis Drake explored the coasts of California in 1579 and Captain James Cook landed in British Columbia’s, Nootka Sound in 1778, the wild west has always been a magnet for prospectors, miners and business entrepreneurs.