Berliner Stadtreinigung (BSR) is driving progress towards its climate protection goals together with Volvo Construction Equipment (Volvo CE) with the purchase of nine Volvo L25 Electric wheel loaders. And the machines are certainly getting the thumbs up from operators.

Never one to do things by halves, Germany’s largest municipal waste management company, BSR, is leading the way with the purchase of nine Volvo L25 Electric wheel loaders. The 5-ton electric machines are being put through their paces across several BSR sites in the Berlin metropolitan area, helping the city keep its streets and sidewalks clean and clear, pushing waste from the city’s 26,000 garbage bins into boxes and transferring the waste to compacting containers. In the winter, the machines are also helping with the important role of keeping Berlin’s roads free of snow and ice, loading de-icing salt and gravel for the city’s grit spreaders. 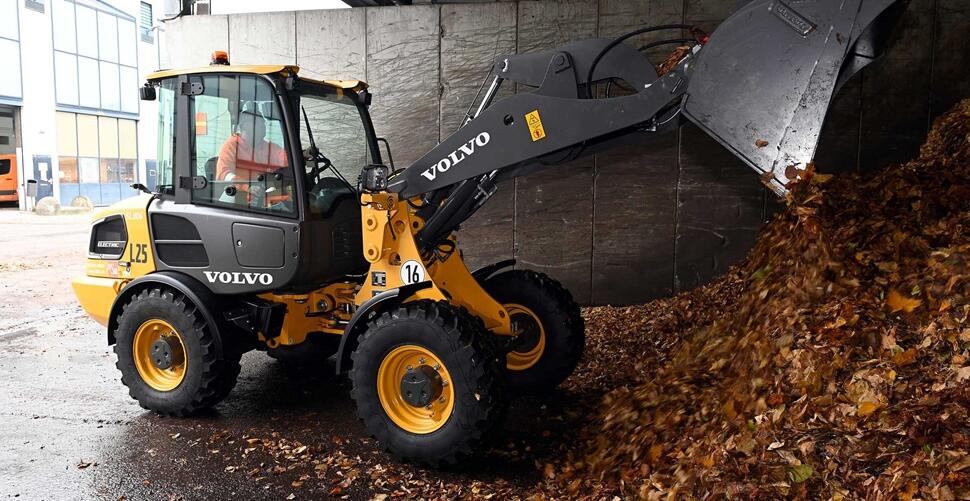 With full power and the wide bucket, wet autumn leaves are no match for the L25 Electric wheel loader

Arvid Rüster, Product Manager at BSR, comments: “We saw the Volvo L25 Electric wheel loader at the 2019 Bauma trade fair in Munich and were immediately impressed with it. No noise, no exhaust fumes, no particulate matter. We had to order some!”

Rüster is a Product Manager responsible for sweeping and construction machinery in BSR’s fleet of around 1,800 vehicles and machines. The fleet includes everything from cars and vans to refuse trucks and sweepers, and even encompasses wheel loaders, bulldozers and excavators. Some 230 of these machines are already electric-powered, among them are waste collection vehicles with fuel-assisted electric drives, which BSR put into service via the German Ministry of Transport’s ‘Clean Air’ program. This is also the case for the nine L25 Electric wheel loaders. In this way, the federal government bears much of the additional cost for the electric drive. 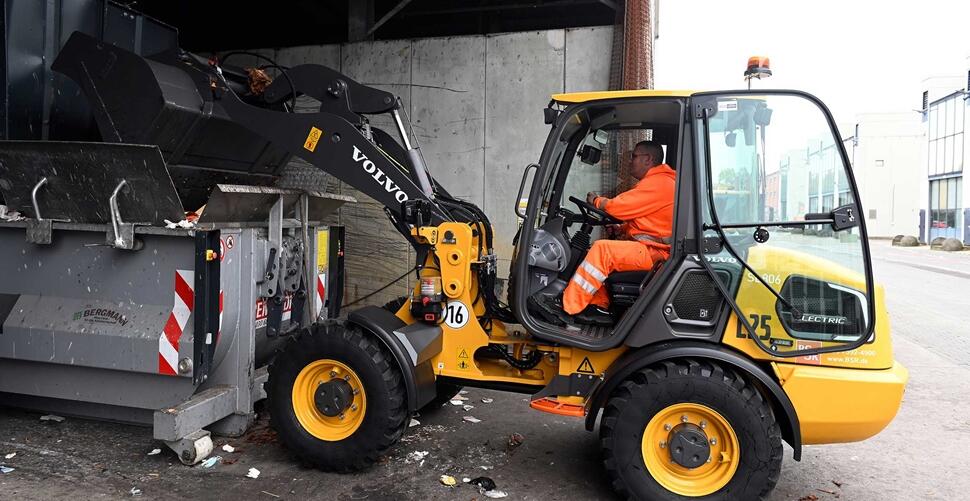 The L25 Electric wheel loader transports waste from 26,000 garbage bins in the city into compacting containers

Berlin is fit for the future

Electromobility has been on the radar at BSR for some time and the company has been developing an intelligent network of charging infrastructure since 2018. Today, a variety of electric vehicles, electric transporters and the new L25 Electric wheel loaders can dock with their On Board charger and recharge sufficiently overnight. In addition, BSR has purchased external fast chargers for the L25 Electric wheel loaders, which enable the machines to be charged from 0 – 100% at 400V in just two hours.

“The L25 Electric wheel loader has a battery capacity of 40 kWh, and this is sufficient for us. The machines are rarely in use for more than one or two hours a day, so they still have enough remaining capacity”, assures Rüster.

It was the ease of operation and intuitive interface, however, that were the deciding factors for Rüster. Not every depot has permanent staff, and it is imperative that the BSR operators are able to operate the all-electric wheel loaders. Around 60 employees have received instruction on the new technology, and all are impressed by its performance. The operators are particularly enthusiastic about how much quieter their working days are with the near-silent operation of the L25 Electric wheel loader and can no longer imagine switching back to a diesel alternative. 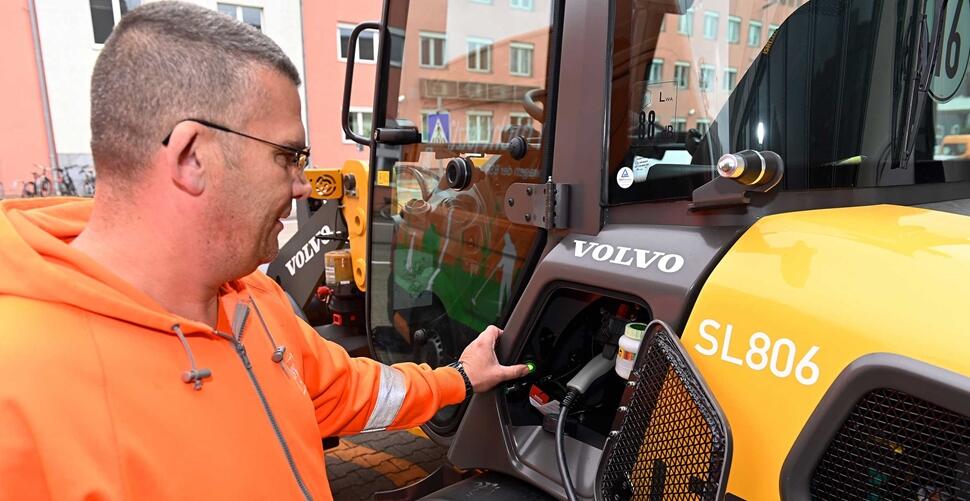 Once the work is complete, Nico Ast connects his L25 Electric wheel loader to the charger

Nico Ast, a BSR employee for 21 years, has already made friends with the L25 Electric wheel loader and is really putting it through its paces this Autumn, pushing wet, heavy leaves together with the 1.8 m wide wheel loader bucket.

Ast says: “Pushing leaves really shows off its power. The L25 Electric wheel loader is stronger than and superior to its diesel brother.” It is quieter and quicker to respond, he adds. The joystick control is also very sensitive. The only thing he still needs to get used to is just how quiet the whirring of the electric motor is. “Given a choice, I would always opt for the electric wheel loader,” the experienced BSR operator says.

When the work is done, Ast heads for one of the 14 charging points at the BSR headquarters in Berlin Tempelhof and in just a few simple steps he connects the L25 Electric wheel loader to the power socket for recharging, so the machine is ready to go again tomorrow.

While electric machines require less servicing than their traditional counterparts, they do need servicing, which is where the specialist expertise of dealer, Swecon Baumaschinen GmbH comes in and the service department in Berlin is well prepared for all service requests. 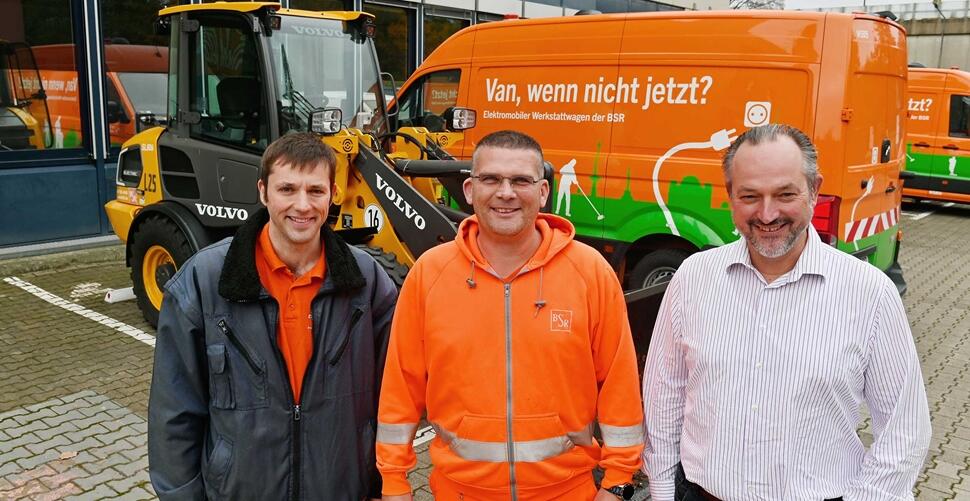 About BSR
Berliner Stadtreinigung (BSR) is a public institution wholly owned by the federal state of Berlin. Its task is to keep Germany’s capital city clear of resident’s refuse, recycle waste and take care of street cleaning and winter services. It employs around 6,000 people across almost 60 sites. BSR has a fleet of around 1,800 vehicles and machines, 230 of which are already powered by electric. The company has voluntarily committed to protect the environment and climate and was the first state-owned company to enter into a climate protection agreement with the federal state of Berlin 15 years’ ago. This has been extended for a third consecutive time, with the current goal to reduce carbon dioxide emissions by 67,000 tonnes per year by 2025. Increasing the fleet of gas and electric powered vehicles will help to achieve this. By 2050, the capital city aims to be climate neutral and BSR will operate an alternatively powered fleet of vehicles.