Volvo Construction Equipment is shining a light on its community-focused efforts with The Building Tomorrow Project – an initiative that encourages involvement and action to create a more sustainable world in which all have access to clean water, housing, proper nutrition and education.

Volvo Construction Equipment (Volvo CE) has a long history of supporting community projects that spread social good. Now, in what has been a challenging year for people worldwide, the company is putting a renewed focus on this work with The Building Tomorrow Project.

From building schools for children in Beijing to building homes in hurricane-devastated Panama City, Florida — The Building Tomorrow Project seeks to create real change throughout the globe.

Putting real action behind the project’s purpose, one such example is the company’s commitment to tackle a key issue in the United States: disaster relief efforts.

In February, Volvo CE turned its attention to hurricane-affected Panama City, Florida, where some families have been displaced for nearly two years since Hurricane Michael destroyed 10,000 homes in the county in October 2018. Twenty volunteers from Volvo CE and local dealer Cowin Equipment assisted in Habitat for Humanity rebuilding efforts there before the nonprofit organization’s planned builds were temporarily put on pause due to COVID-19 concerns. 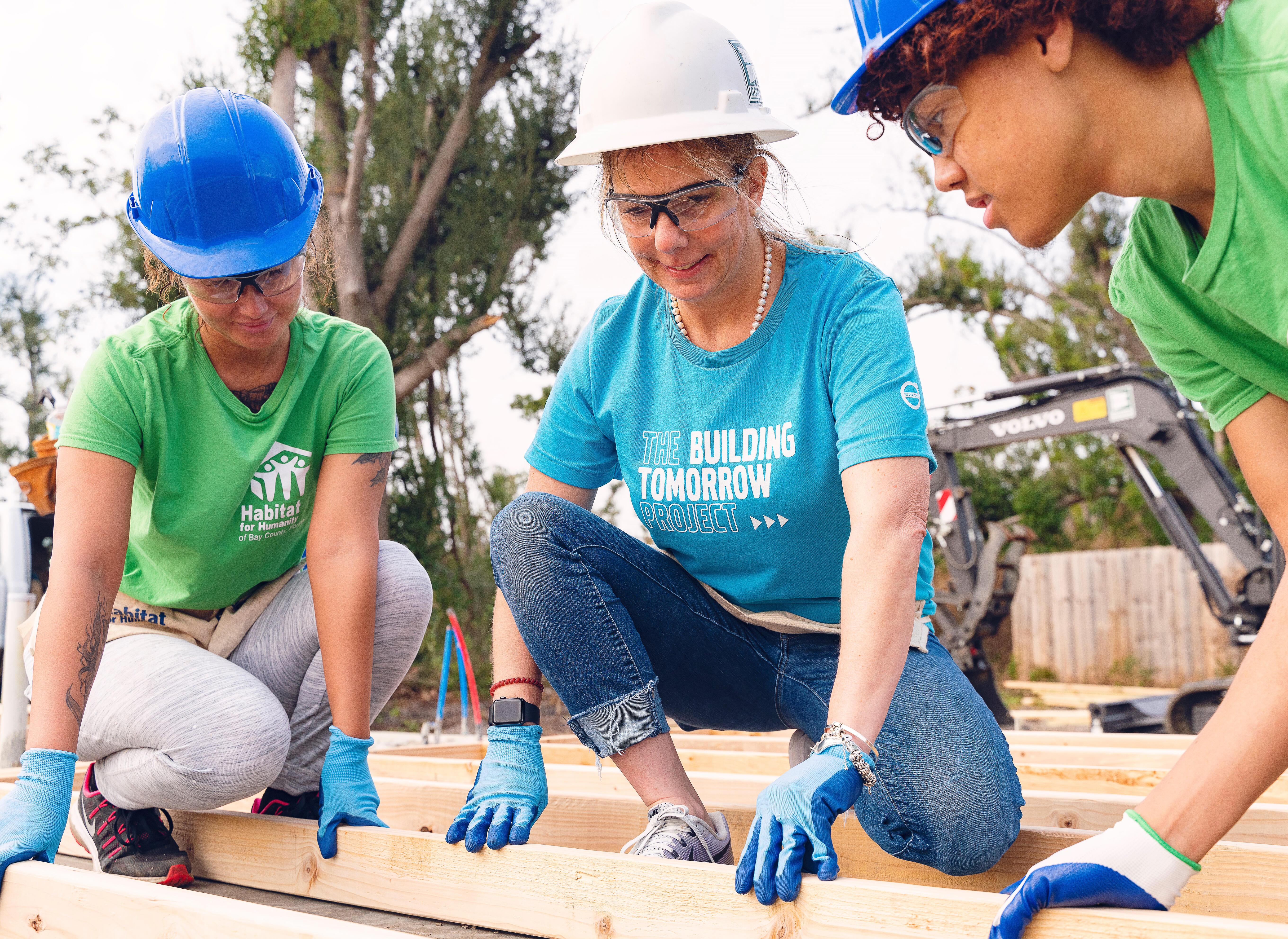 A volunteer from Volvo CE (in blue) works alongside the future homeowner and her son in February 2020.

Throughout 2020 and 2021, Volvo CE, has committed to supporting Habitat for Humanity in North America: including in disaster relief areas such as Panama City and in communities served by local Volvo CE dealers.

While building efforts were temporarily paused during the health crisis, building is beginning to resume across the United States. While those efforts ramp up, the organization is encouraging virtual volunteerism to help raise funds in support of future build sites. In addition to the company’s commitment to support home builds as projects resume, Volvo CE North America recently donated $116,000 to Habitat for Humanity — a result of the company’s partnership with Discovery’s Gold Rush TV show and the sales proceeds of a custom Gold Rush excavator announced earlier this spring. The same sale also resulted in a $174,000 donation to Building Homes for Heroes — an organization that builds custom homes for U.S. veterans in need.

“Through our partnership with Volvo CE, Habitat is better poised to address the recovery work in areas affected by natural disasters and the affordable housing crisis that exists in communities around the world,” says Colleen Finn Ridenhour, Chief Development Officer for Habitat for Humanity International.

Building Tomorrow across the globe

The work in Panama City is just one of many projects to be highlighted as part of The Building Tomorrow Project. In addition to helping families build adequate housing in North America, Volvo and its employees are helping to empower underprivileged youth in India by providing them with machine operating skills and contributing to the construction of hospitals and schools in Zambia, China and Latin America. While these are just a few examples, similar community projects are happening all over the world. 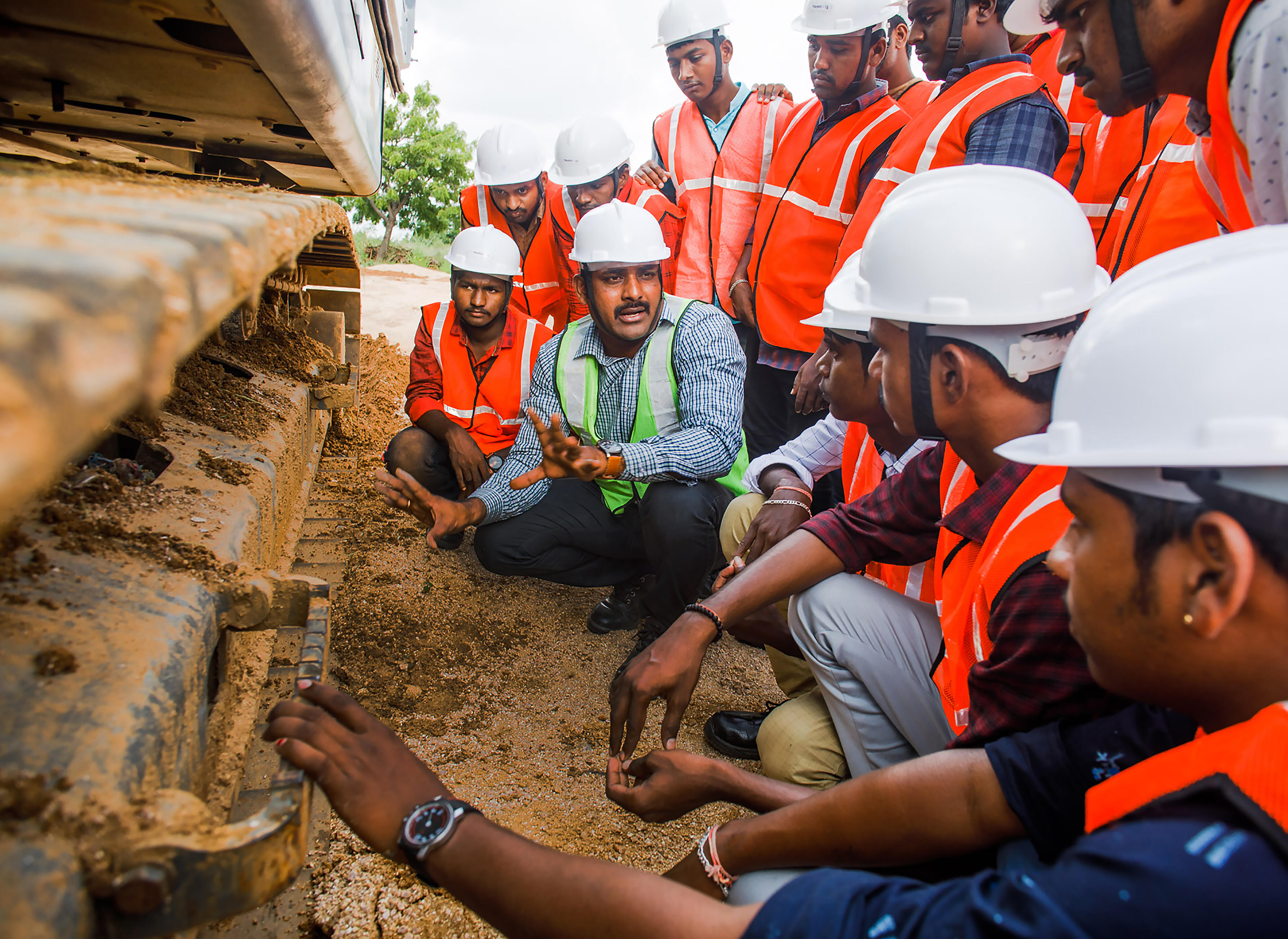 But none of this is new. Volvo CE has always been driven by the idea that through the passion, hard work and collaboration of its people, it can make a meaningful contribution to thriving and sustainable societies.

Bill Law, Volvo CE Head of Brand, Marketing and Communication, says: “The Building Tomorrow Project is not a campaign. It’s a commitment that we have lived and breathed from the very start of our business. It is an ongoing pledge from our Volvo CE family to millions around the world that we’re working to change lives for the better and provide communities with what they need to rise above societal challenges.”

Volvo CE and Cowin Equipment worked with Habitat for Humanity to provide disaster relief in Panama City, Florida, after the devastating Hurricane Michael in 2018, which destroyed more than 10,000 homes.