On the 29th August, Volvo Construction Equipment and its customer Skanska began testing the viability of its Electric Site concept at Skanska’s Vikan Kross quarry, near Gothenburg, Sweden. The system, which incorporates electric and autonomous Volvo machines, will run in a real production environment for 10 weeks – delivering an anticipated 95% reduction in carbon emissions and 25% reduction in total cost of operations.

Joakim Käpynen, production manager at Skanska’s Vikan Kross site and Uwe Müller, chief project manager for Electric Site at Volvo CE.
Swedish companies Volvo Construction Equipment (Volvo CE) and Skanska are turning the quarrying industry upside down in a groundbreaking study to create the world’s first ‘emission-free’ quarry. Drawing on the electromobility and automation expertise of the Volvo Group, the research project, dubbed Electric Site, aims to electrify each transport stage in a quarry – from excavation to primary crushing, and transport to secondary crushing – although a negligible amount of diesel power will still be used. The system’s efficiency, safety and environmental benefits are set to impact both customers and society at large.
Volvo CE and Skanska began testing the Electric Site concept on 29th August at Skanska’s Vikan Kross quarry near Gothenburg in Sweden, which produces aggregates for construction purposes as well as for asphalt and cement. Production will run for 10 weeks and has been designed to achieve the same output as Skanska’s usual equipment but, crucially, with up to 95% lower carbon emissions and up to 25% lower total cost of operations.
“This is the first time that anything like this has been attempted in the quarrying industry and, if successful, Electric Site could serve as a blueprint for transforming the efficiency, safety and environmental impact of quarries around the world,” said Gunnar Hagman, CEO of Skanska Sweden. 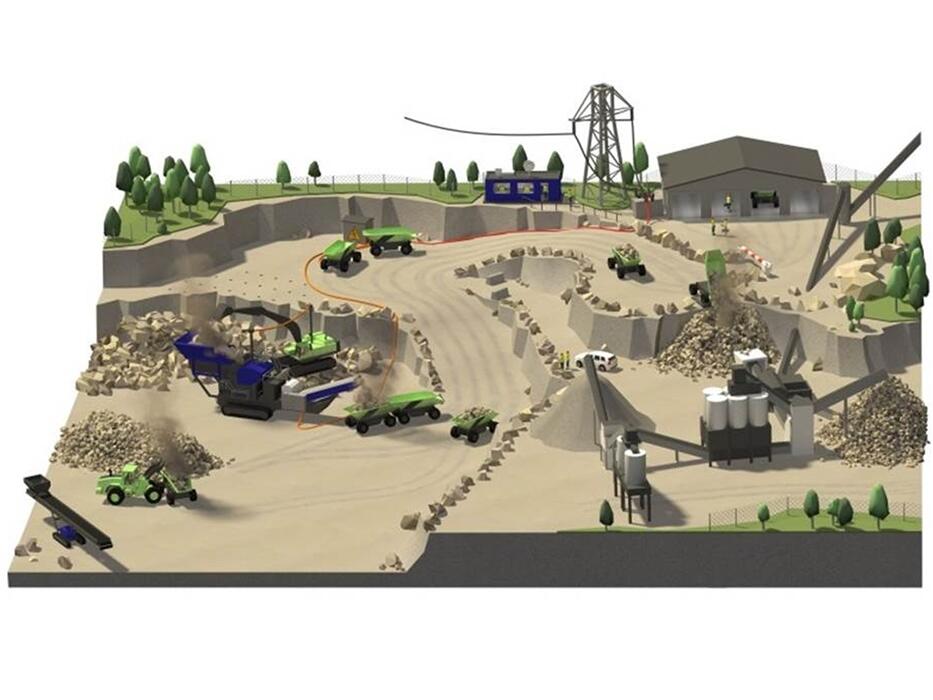 Overview of the Electric Site

“We have had to completely rethink the way we work and how we look upon machine efficiency – pushing the boundaries of our competence,” said Melker Jernberg, president of Volvo CE. “The total site solution we developed together with our customer Skanska is not a commercial solution for sale today and we will evaluate the outcome of the tests but we have learnt so much already, elements of which will be fed into our future product development,”

From elephants to ants

Three rigid haulers, for example, have been replaced by eight smaller prototype HX02 autonomous, battery-electric load carriers to transport the material from the primary mobile crusher up to the secondary static crusher. 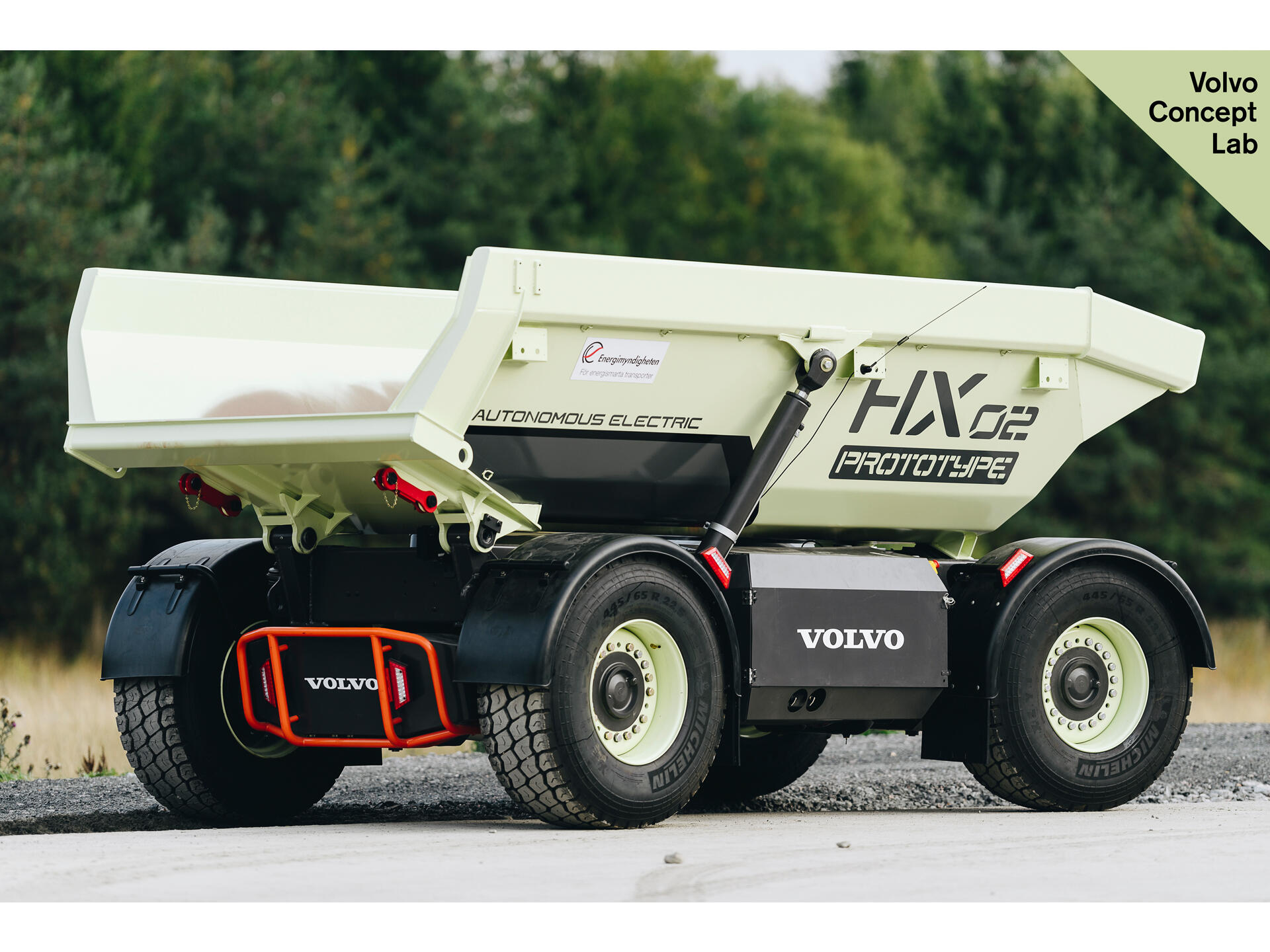 The protoype has advanced significantly since the HX01 was first shown to customers and members of the international press at the Volvo Exploration Forum in September 2016. “The HX01 was our proof of concept,” explained Uwe Müller, chief project manager for Electric Site at Volvo CE. “Once we knew it was feasible, we updated the design requirements for the HX02 to incorporate shared technologies and components from the Volvo Group, such as electric motors, batteries and power electronics. Integrating a completely new drivetrain was crucial to take full advantage of the groundbreaking electromobility developments that are happening inside the Volvo Group. Another new feature is the addition of a vision system, which allows the machine to detect humans and obstacles in its vicinity.”

The primary crusher on the Skanska site is loaded by the 70t dual-powered, cable-connected EX01 excavator prototype, which had not previously been seen by customers and press. The base machine for the EX01 is a Volvo EC750 model that has been upgraded to incorporate an electric motor in addition to the diesel engine.
“To fit the new components in the machine without increasing its size required a significant amount of repackaging work,” Müller explained. “However, in terms of the operator interface and controls, nothing has changed – it’s operated in exactly the same way as a conventional Volvo excavator. If the cable is connected, the machine will automatically start in electric mode. If it’s not, it will start in diesel mode.”
“Because the machine will be relatively static – only moving a few meters once or twice a day as the excavator works its way through the blasted rock – it’s ideally suited as a fully electric machine on a cable. This has allowed us to make it a zero-emission excavator when it’s plugged into the grid. However, we’ve designed it with flexibility in mind, so that we have the option of using the diesel engine when it’s needed, for example, to reposition the machine or quickly move it prior to blasting,” he continued. 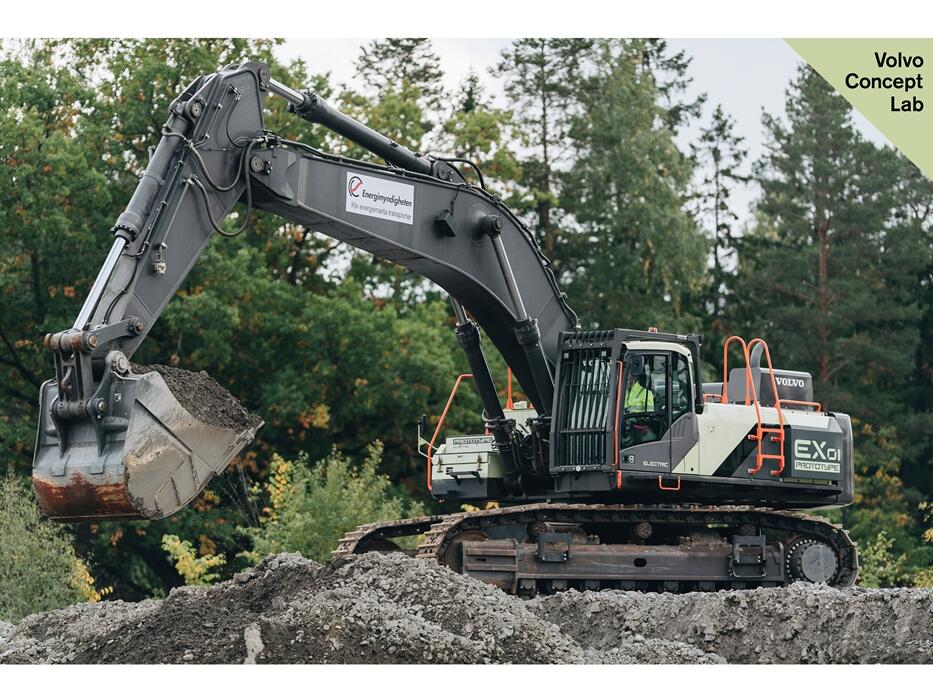 The piles of material on the site are organised by the LX01, Volvo CE’s prototype electric hybrid wheel loader. The machine can deliver up to a 50% improvement in fuel efficiency, as well as significant reductions in emissions and noise pollution compared to its conventional counterparts. The LX01 is a ‘series hybrid’ that incorporates a driveline that consists of electric drive motors mounted at the wheels, electric-driven hydraulics, an energy storage system, a significantly smaller diesel engine and new machine architecture, including a new design of the lifting unit. It is this combination that enables the substantial gain in fuel efficiency. The prototype – which has 98% new parts and a fundamentally new machine design – can do the work of a wheel loader that is one size larger. 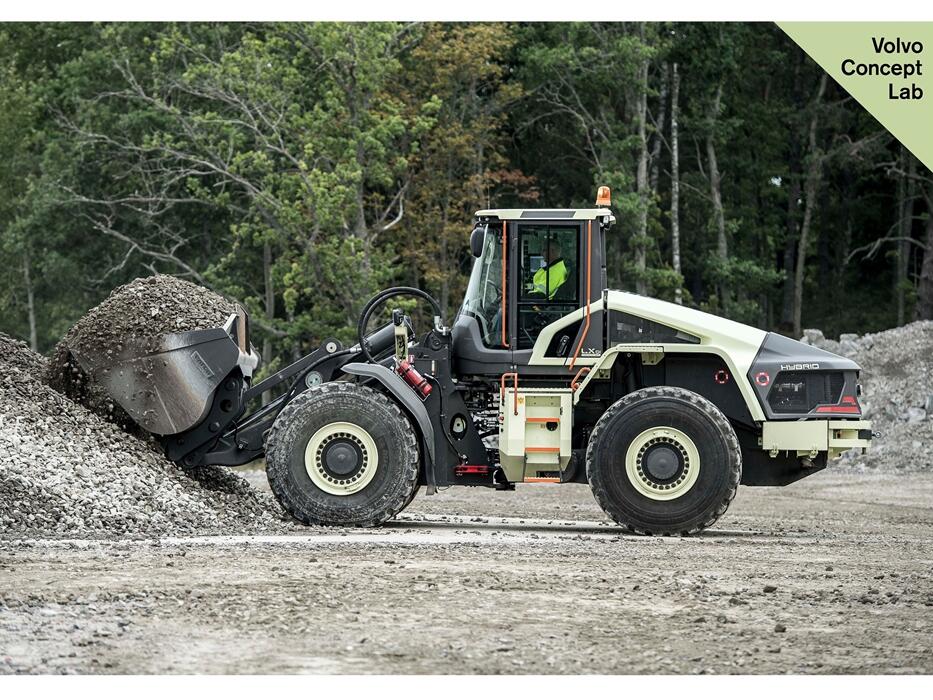 Senior executives from Volvo CE and Skanska celebrated the start of the test period on 29th August alongside other important dignitiaries at an official inauguration ceremony. Among the attendees were Martin Lundstedt, President and CEO of the Volvo Group; Melker Jernberg, President of Volvo CE; Anders Danielsson, President and CEO of Skanska; Gunnar Hagman, CEO of Skanska Sweden; and Mikael Damberg, Sweden’s Minister for Enterprise and Innovation. Representatives from the Swedish Energy Agency, Linköping University and Mälardalen University, WWF, the Swedish Aggregate Association, and the Swedish press also bore witness at this milestone occasion.

“It is exciting to finally see how the Volvo protoype machines work together along with the charging systems. I feel extremely proud to be part of this innovation – and to work closely with such talented colleagues at Volvo CE and Skanska,” said Joakim Käpynen, production manager for Skanska’s Vikan Kross quarry. “Electric Site proves that with cooperation and transparency throughout the entire value chain, you can really make a difference.”

Find out more about the Electric Site project here.