Why construction has entered the AI race

While other sectors boast of advances in artificial intelligence (AI), construction is now taking the lead, believes a panel of experts from Volvo Construction Equipment (Volvo CE).

Construction has a reputation for lagging behind other industries in terms of new technologies. Is that a fair assessment when it comes to AI and automation?

TM: I would argue construction is about to take the lead in the autonomous race. Here at Volvo CE, we already have automation up and running with workable concept machines, something that the automotive industry hasn’t caught up to yet. We have the perfect playground for these technologies: fenced areas, restrictive rules and simple repetitive applications. And with construction being an industry with inherent risks, if we can remove humans from the ground into more remote operation, then we will see huge benefits for site safety.

CG: AI needs large chunks of data in order to work, which is partly why industries like finance, banking and entertainment have been some of the most successful early adopters. Nowadays, these technologies are developing extremely fast for construction – particularly when it comes to mobile machines and the area of ‘perception’, or obstacle detection. It’s only lately that we’ve got the computational capacity that makes it feasible.

So does Volvo CE have access to the large amounts of data required?

CG: We are starting to get more and more data out of our machines and that is allowing us to build the infrastructure we need to develop really advanced algorithms. Already we’ve made huge advances in the after-market sector, customer support and mobile applications. And now with even more data at our fingertips, we will soon be able to use AI for more things, such as automation and driver support systems. It’s an evolution.

Tell us about Volvo CE’s own AI journey.

TM: It started almost 20 years ago with intelligent sub-functions such as the Volvo ‘Fully Automatic Power Shift’ and then followed by our patented ‘Reverse By Braking’ function. While they are not specifically using AI, they are very intelligent functions and have since opened the door to more sophisticated machine learning. Since then we have built a system of networks, Volvo Assist, all of which use intuitive location technology to save time and energy on those everyday site tasks.

JH: From there we started to explore safety and overall site efficiency. We asked ourselves: ‘How could AI be used to help with navigation, deciding the most appropriate paths and routes and detecting obstacles?’ When we presented the HX01 autonomous concept hauler – a real physical machine that was tested and proven to work on real construction sites – it was a major breakthrough. 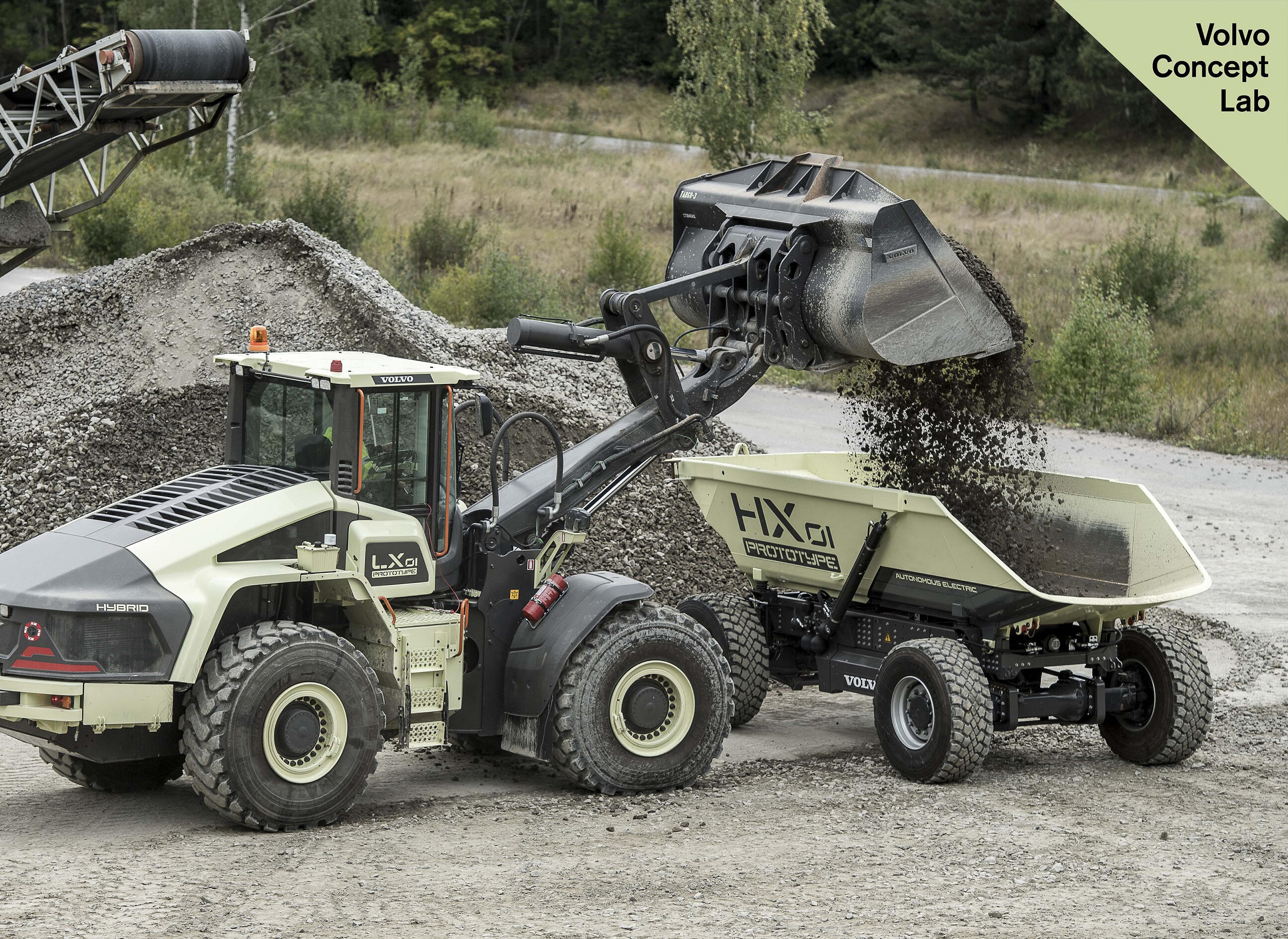 TM: The HX01 concept is a genuine point of pride for us here at Volvo CE. There isn’t anything like it, even when compared to the automotive industry.

So where do you go from here?

CG: Eventually we want to be in the position where one operator can handle more than one machine. From a purely technical perspective, our research has already taken us close to achieving this. Another possibility for the future is for us to really customize the behaviour of our machines, so that they fit a very specific application.

TM: The HX01 concept was the first step and we have proved it can work. Now we will do the same with our wheel loaders and excavator concepts. As we progress, this will change the way we design our machines. We talk about the opportunity to work 24-7 and 365 days a year. AI and autonomous technology will help make this a reality. Enabled by this technology it’s not so far-fetched to think that one day autonomous construction machines could be used in off-earth space mining applications.

And these technologies will also surely change the way our construction sites look?

JH: One tangible difference will be the ability to remove humans from the active areas of the site and allow them to work more safely and efficiently remotely. But we’ll also start seeing the layout of a site change – such as where we store piles of material. AI gives us these endless possibilities to make efficiencies.

How comfortable do you think customers will be to adopt this new way of working?

JH: Construction has a reputation of being conservative and traditional. But I would argue the opposite. The AI shift may have started elsewhere but we are now ahead of the game. The industry is waking up to the possibilities of AI – that it will make things safer and more efficient. You only have to be in one of these autonomous machines for a minute before you start to feel comfortable and trust every decision it makes. And when we meet our customers, they tell us they want to buy our prototype machines today.

This must be a pretty exciting time to be working in construction. Do you think there has ever been a time of such technological progress?

JH: I think it’s fair to say this is the same amount of change as when dedicated construction machines were first invented a century ago. It is at that same level of disruption.

TM: It’s a wonderful time to be part of it.