Hauling shot rock downhill in order to then to go uphill may seem like a crazy way to run a quarry. But total cost of ownership and productivity have both jumped at Savage Quarry.

At Savage Stone’s 400-acre quarry in Jessup, Maryland, gabbro is mined from five, 43-foot tall benches, with chemical rock hardness increasing with each lower level. The shot rock (similar to granite and good for coarse road base) used to be loaded into Volvo 35- and 40-ton articulated haulers and 100-ton Euclid rigids and transported a half mile uphill to the primary crusher, a Lippmann 5062 jaw crusher. The jaw crusher processes rock to 5-7 inches, which is then stockpiled on the surge pile for the finishing plant, where it is crushed to 1 ½ minus.

Stephanie Poole, Mining Engineer and Pit Supervisor for Savage Stone, explains that the quarry has exhausted its pit boundaries to the north and west, so expansion is moving to the south side of the pit and into lower levels of rock reserves. She says: “As the pit deepened our haul roads grew longer and cycle times increased, which in turn slowed production. We looked at options that would allow us to go faster uphill, but then looked at the economic aspect of putting the primary crusher closer to the deposits and hauling rock downhill.” 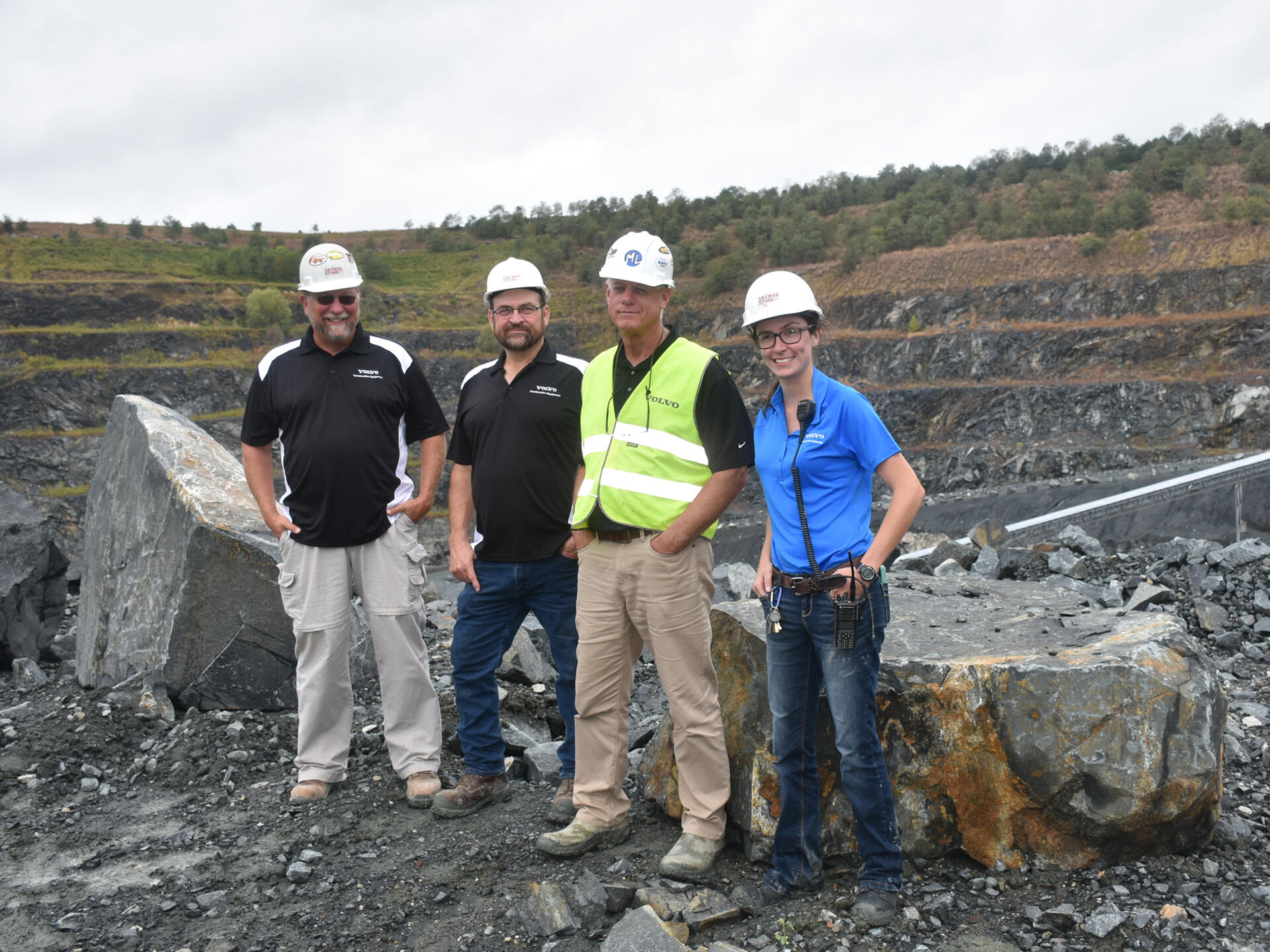 A major capital project started in spring 2017 to relocate the primary crusher nearly 380-feet below its current elevation and install conveyors to shuttle the crushed stone back uphill to the finishing plant. The production benefit is two-fold. Loaded haulers travel downhill can operate faster and use gravity to save on fuel consumption.

If the crushing plant is the heart of a quarry, the first line excavator is the pulse, setting cycle times by how fast it can load trucks.

As part of the expansion project the quarry upgraded its primary excavator to a Volvo EC750E to meet the increased production from the crushing plant’s new workflow. The super-abrasive environment, running 12-hour shifts five days a week, demanded a durable and powerful excavator. The 75-ton machine with a 516 hp Volvo Tier 4 final engine is matched to a Rockland 6.5 yd3 bucket that has been modified internally and externally with guards over the cutting edge and side shrouds. The buckets are lined with AR450 or 500 plate and T1.

Terry Baker Sr., Mobile Equipment manager at Savage Stone, says: “With typical dirt work you change bucket teeth once a year. With this rock, we are getting 96 hours on a set of teeth, so we are averaging three teeth changes for every oil change.”

Savage Stone assigns a dollar value to every piece of equipment down to the minute. This formula was developed from crunching production sheets to calculate tonnage per day. Management uses this data when evaluating when to replace equipment and as comparisons in the purchase process. Terry adds: “We have a certain number of tons we have to meet every day to cover costs. The trucks and excavators have to roll.

“We explored several competitor brand excavators. There is a lot that went into consideration including specs, serviceability, price, dealer and manufacturer support. Fuel consumption was a big concern. We burn 15,000 gallons of fuel here a week with all of our machines, so I want to get the maximum fuel efficiency per hour that we can.”