An improvement in European and North American sales in the first quarter of 2015 were more than offset by continued weakness in Asia – particularly China, where sales were half what they were in the same period in 2014 – reducing Volvo Construction Equipment total sales by 5% during the period, compared to the previous year.

During the first three months of 2015 Volvo Construction Equipment saw net sales decrease by 5% to SEK 12,737 M (SEK 13,371 M in Q1 2014). Operating income was affected by lower sales volumes, a provision for expected credit losses and lower earnings in China, decreasing to SEK 352 M, compared to SEK 647 M in the first quarter of 2014. These factors weighed on operating margin, which reduced to 2.8%, down from 4.8% in the same period the year before.

The restructuring program that was launched in November 2014 is developing according to plan.

Market situation
The Chinese market has been in decline since March 2014 and this continued in the beginning of 2015, with a decline of more than 50% compared to the preceding year. This was mainly caused by continued lower levels of economic activity, lower machine utilization, and construction projects and mining activity remaining soft. In Asia, excluding China, the total market decreased in the period, mainly driven by decline in Japan, South-East Asia and India. Through February 2015 the European market was down by 12%, mainly driven by a sharp drop in the Russian market as well as slowdown in the French market. The UK and Germany are still growing. The North American market continued to grow, primarily in the segment for compact equipment. The decrease in South America was mainly caused by weak economic development and low business confidence in Brazil.

“We are working to adapt to lower volumes and are implementing a series of measures to reduce cost levels. However, our efforts could not fully offset the significant drop in volumes,” commented Volvo CE’s president Martin Weissburg. 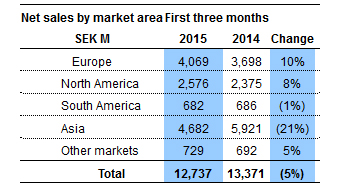