Wading for the rescue

Articulated haulers go through some pretty extreme terrain to haul stone, earth, debris and more. They power through the deepest mud, the steepest grades and drive through rutted-up paths that nowhere near resemble roads. You know this. But murky, rising flood levels were uncharted territory in the summer of 2013. Even the haulers’ owners didn’t know if the machines were up to the deep challenge unleashed by a fast-flowing disaster known as the Alberta floods. But they didn’t have time to think about the 7’ (2m) deep water. They acted. And together they saved hundreds of lives.

The summer of 2013 was a wet summer in many areas of Canada and the United States. In High River, Alberta, Canada, the town’s name would suggest that rising waters are commonplace. Indeed, minor floods in the late spring and early summer are expected—it’s not if, but when. The normal summer weather pattern for High River, located north of the U.S. state of Montana, called for moisture to hit the Canadian Rockies and then turn into precipitation. But in mid-June things quickly went beyond the norm. Moist air came up from the States and stalled, resulting in sustained heavy rainfall in the foothills of Alberta. The water in the foothills had no place to go but down, melting the snowpack in its wake and overtaxing the rivers and waterways—leaving the towns in the elevations below little time to react. Thirty-two states of local emergency were declared, as more than 100,000 people were displaced throughout the Alberta region, according to the Canadian Red Cross.

When it rains, it pours

Born and raised in the High River, Alberta area, Ken Smith and his wife Mary Dawn have raised their two sons and lived in the area their entire lives. They know the lay of the land and the people that make up the rural, close-knit community that supports his 21-year-old business, Ken Smith Corral Cleaners, which specializes in manure spreading, feedlot cleaning, excavation, loading and hauling. His sons, Jarrett, 24, and Keenan, 21, have run all types of equipment since they were young and the experience would come in handy in a way they least expected. 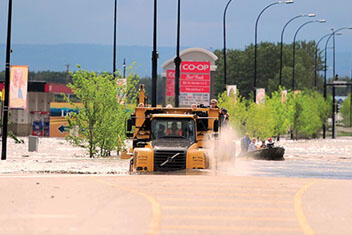 On June 19, a storm was forecasted and the Smiths were mindful of heavy rainfall warnings and storm watches because they’d seen this many times before. But when Mary Dawn and Keenan headed into town the next morning, they were repeatedly flagged down by city officials and firemen seeking the assistance of the company’s three wheel loaders. But the loaders could only do so much in the rapidly rising flood waters and were struggling to get down numerous water-choked streets. By noon all phone communications were down, landlines and cellular. Keenan and his brother Jarrett realized quickly that the only thing that might stand a chance in the flood waters were the company’s two Volvo A30D articulated haulers. The machines were custom modified to act as manure spreaders and featured flat elongated beds that had been extended by more than 11’ (3.3m).
Get hauling “The Volvo haulers had enough power and weight to withstand the water currents they’d encounter out in the streets,” Ken said. “Any other vehicle would have been washed away. But the Volvos kept on rolling.” Knowing the town and the local roads like the back of their hands helped Jarrett and Luther, too, because the water was so high that it was hard to tell where curbs or fire hydrants were. The Alberta flood of 2013 recorded flow rate measurements of a staggering 2,200 cubic meters/sec (78,000 cu.ft/sec). Normally, the nearby Highwood River flows at a rate of 25 cubic meters/second (880 cu.ft/sec). As darkness set in everything was pitch black, except the headlight beams of Ken’s Volvo haulers. By 10 p.m. the average water depth in the town reached 5’ (1.5m) high. Many areas had water levels upwards of 7’ (2m), and some spots had depths reaching 12’ (3.5m) high.

Ken went house to house rescuing people with his Volvo haulers; many of them didn’t even have time to gather their belongings or keepsakes due to the rapidly rising water levels. “In many instances they’d roll the spreader hauler up as close to the porch or roof as possible to where the people were waiting,” Ken said. The repetitive actions went on through the night. “It’s not the type of cycle times we usually talk about with equipment,” said Larry Brunton, Strongco Equipment branch manager for Calgary. “But it did wonders.” All told, Ken estimates that they helped move about 1,000 people throughout the night, at a rate of about 50 people per full hauler load. “The core Volvo hauler gave them the weight, power, height and design to actually be a good fit for this type of rescue effort,” said Mike Eperjesy, Volvo District Product Support Manager. “Of course Volvo didn’t design its machines for this flood application, but some of the key design attributes that helped the machines run for as long as they did in the flood, were the high placements of the engine exhaust, the engine air cleaner and breather filter. The engines could run as long as they stayed dry.” Ultimately, the high waves of water were too much for the machines. Jarrett’s articulated hauler was overcome by an 8’ (2.5m) water surge and he had to be rescued by boat. The machine ended up submerged in water higher than the cab floor for more than two weeks following the rescue efforts.

Although Volvo didn’t design its haulers expressly for use in water, they certainly did fit the bill for Ken’s intended business use. His customized spreader trucks drive out onto ranchers’ fields to clean pens and haul manure, gravel and silage, which often involve encountering rough terrain, deep mud and rocky soil. “We looked at all the hauler brands and liked Volvo best,” Ken said. “The hydraulics suited us perfectly because we only had to add an extra flow pump to run the mechanical end of the spreader unit at the back of the bed. All other makers would have required an additional pony motor and extra lines. We liked that Volvo was built stoutly and had flotation tires with six-wheel drive. They were reliably perfect for us and then we outfitted them to help us even more.” 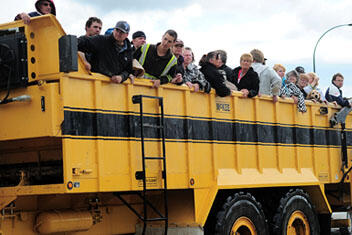 Ken’s custom spreaders are the only two of its kind in the world. He said the two modified Volvo haulers did the work that was previously done by five tandem trucks, and with less need for labor or maintenance. What’s more, he said the Volvo A30Ds were better suited than its bigger brothers the A35 and A40, due to its narrower width, making it easier to fit through the gates of farms and ranches. The two haulers weren’t the only Volvo machines helping during the Alberta flood, 10 Volvo A35D and A40D haulers that Ken purchased from Strongco were also used in the ongoing government cleanup efforts.

Pulling together in the aftermath

Ken’s family, like almost everyone in the community, lost a lot in the disaster, including the custom Volvo hauler spreaders, which were declared a total loss after all their heroic efforts. Some people lost their homes and small businesses, and sadly there were also several flood-related deaths. But the community stuck together during the crisis. “We weren’t the only ones helping with our machines. Others were using their rock trucks, loaders and even farm combines with their tall platforms to help people get to dry land,” Ken said. “There’s no playbook to evacuate an entire city. Everybody just said, ‘Let’s get it done. Let’s get to work.’” Just like the Smith family, Strongco, the largest Volvo Construction Equipment dealership across Canada, is heavily vested in the recovery. Strongco’s corporate and employee donation program recently raised $12,300 for Canadian Red Cross’ recovery efforts. Volvo Construction Equipment North America contributed an additional $5,000 to the donation. Together, the Smiths, Strongco and High River residents, all pulled through and worked together to help wipe away the mud, water and tears from one unforgettable summer.