Volvo makes a splash in Colorado

Nestled in the Animas River Valley, surrounded by the San Juan Mountains is the city of Durango, Colorado. The region’s evergreen forests and babbling creeks are adored by locals and nature enthusiasts alike; attracting a steady flow of holidaymakers throughout the year. With tourism the leading driver of Durango’s economy, maintenance on local attractions, such as the Durango Whitewater Park, is necessary.

The tourist hotspot is situated along the Animas River, a 203 km (126 mi) section of the Colorado River System. The Animas River runs through the bustling city of Durango and is one of the top whitewater stretches in the US, with flow rates ranging from 200- 6,000 cubic feet per second (cfs). The river is also recognized by Colorado wildlife officials as a Gold Medal Water. The status is reserved for waters that consistently support a minimum trout standing stock of 27 kg (60 lb) per acre and at least 12 trout, measuring 355 mm (14 in.) or longer, per acre.

In winter 2014, improvements were made to create waves and holes to enhance the Durango Whitewater Park. The features created were powerful and difficult for the average river users to enjoy during periods of high flow. To provide a more pronounced, easier passage for recreationists and improve the fish habitat, the Durango Whitewater Park is undergoing a $60,000 renovation to widen and lower the existing structures. The updates were scheduled from February to March of this year, and indeed much of the work was completed during that time. However, due to higher river flows, the remainder of the renovations has been delayed until later this year when the river lowers. The park remains open while renovations are ongoing.

Working as the main contractor is Whinnery Construction, who was given the task of turning two of the four whitewater structures in the permanent whitewater park. This includes trimming the rocks, firmly secured in concrete.

Established in 1990, Whinnery Construction started out as a construction company, focusing primarily on local utility work in Lake City, Colorado; later expanding its services to include road building, infrastructure, and river restoration. Stan Whinnery is the owner of the family-owned business and fifth generation to live in Hinsdale County, one of the most remote counties in the US. Though small in population, the area is rich in reclamation opportunities. “There are a lot of abandoned gold and silver mines, particularly in the San Juan region,” Whinnery explains. “I looked to my family’s mining and logging background to make a start in reclamation work.”

With prestigious jobs like designing the 2012 London Olympics whitewater course and the Riversport Rapids whitewater center in Oklahoma City in its back catalog, S2O Design is the ideal partner for the Durango Whitewater Park project. Scott Shipley, three-time Olympic kayaker and founder of S2O Design speaks fondly of the collaboration: “Whinnery excelled at projects that require precise cutting of natural rock to ensure each piece can withstand fluctuating water currents.”

Combining Whinnery Construction’s expertise in rock cutting with S2O Design’s knowledge of rock placement, the two have set sail to tame and restore the Animas River for the development of the Durango Whitewater Park project. The project includes three deliverables: structural integrity of the rock, recreational performance and high quality aesthetics that improve the flow for recreationalists and fish navigation channels. 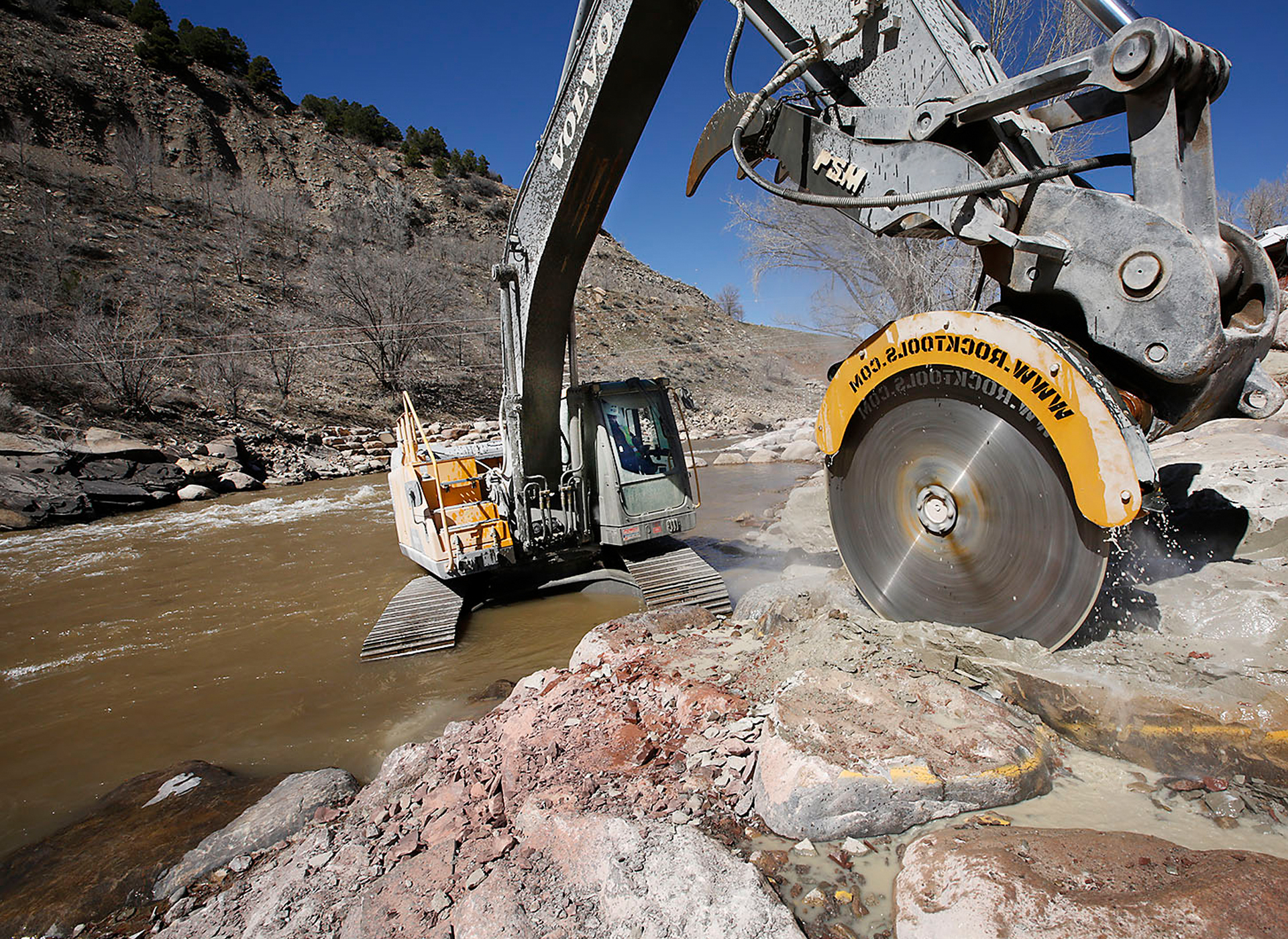 Fitted with a rocksaw attachment, the Volvo excavator cuts the boulders with hairline accuracy.

“River restoration is a seasonal business,” Whinnery explains. “The summer is the optimal time because the water is low, but it also happens to be the peak of whitewater rafting and kayaking expeditions. The Spring provides a very small window of opportunity for us; when the weather warms and the water starts to flow.”

During the limited time period, in-stream construction likewise presented potential problems. “We needed to modify the previously placed rocks to change the character of the waves at high flow,” explains Nathan Werner, project engineer for S2O. “The existing rock structures in the park are concreted together, so there was no easy way to make even a minor adjustment.”

Because every piece of added or removed rock has an effect on the flow, Whinnery had to be innovative. “We couldn’t use a breaker attachment to crack and reset the rocks because the expansion grout creates small fractures within the rock that would shatter by the force of the breaker,” says Whinnery. The solution, as explained by Werner, was thanks to Stan Whinnery, who came up with the idea to use a rocksaw to score the rock, followed by a hydraulic hammer fitted on a skid steer, for a clean finish without shattering or cracking the bedrock.

To meet the demands of the site, Whinnery Construction and S2O Design turned to Volvo Construction Equipment for productive and versatile machines. The equipment spans the size classes, including L250H front end loaders, EC160, EC250 and the latest EC300E excavators, and A30C and A35G articulated trucks.

A mend in the river

The larger excavators (EC250D and EC300E) are specified with the proportional two- pump flow, offering greater control for precise and fast operations. Other features work to ensure the work is carried out quickly and efficiently.

“We use a thumb attachment to stack the rocks,” says Whinnery. “When you have a four tonne rock on the end of the boom, with a crewmember making sure it's sited correctly, you need a powerful, stable machine. Or, if you are using a rocksaw making a six millimeter (¼ in.) wide cut through one meter (36 in.) thick rock, the precision has to be perfect.”

Precision isn’t just down to the cut, but also involves the selection of rocks. Some rocks might be handled three to four times until the right location for them is found. It is common to sort through 100 rocks before locating the correct size and shape to fill a specific spot, but doing so ensures the deliverables are met.

“On an average river restoration project, we will use three ft. diameter rocks, weighing around 2.5 tonnes,” says Whinnery. “When you are dealing with 12,000 individual rocks for a project, it becomes a logistical issue. We use Volvo articulated trucks to transport the rocks from the source sites to the job site. We try to stay in the 30 tonne truck range because they get around easier on softer ground but can haul the heavy loads.”

The performance of the machines has not gone unnoticed. “Pound for pound, Volvo CE is one of the best brands of excavator manufacturers out there,” says Whinnery. “Much of the terrain we are on is demanding on an excavator. We have some unbelievably steep river banks, up to 72% grade, and the Volvo climbed right up.”

The Durango Whitewater Park, when whitewater enthusiasts paddle through it later this year, will see the passageway is structurally sound, high-performing and aesthetically pleasing – not to mention safe for water-sport enthusiasts and fish alike. 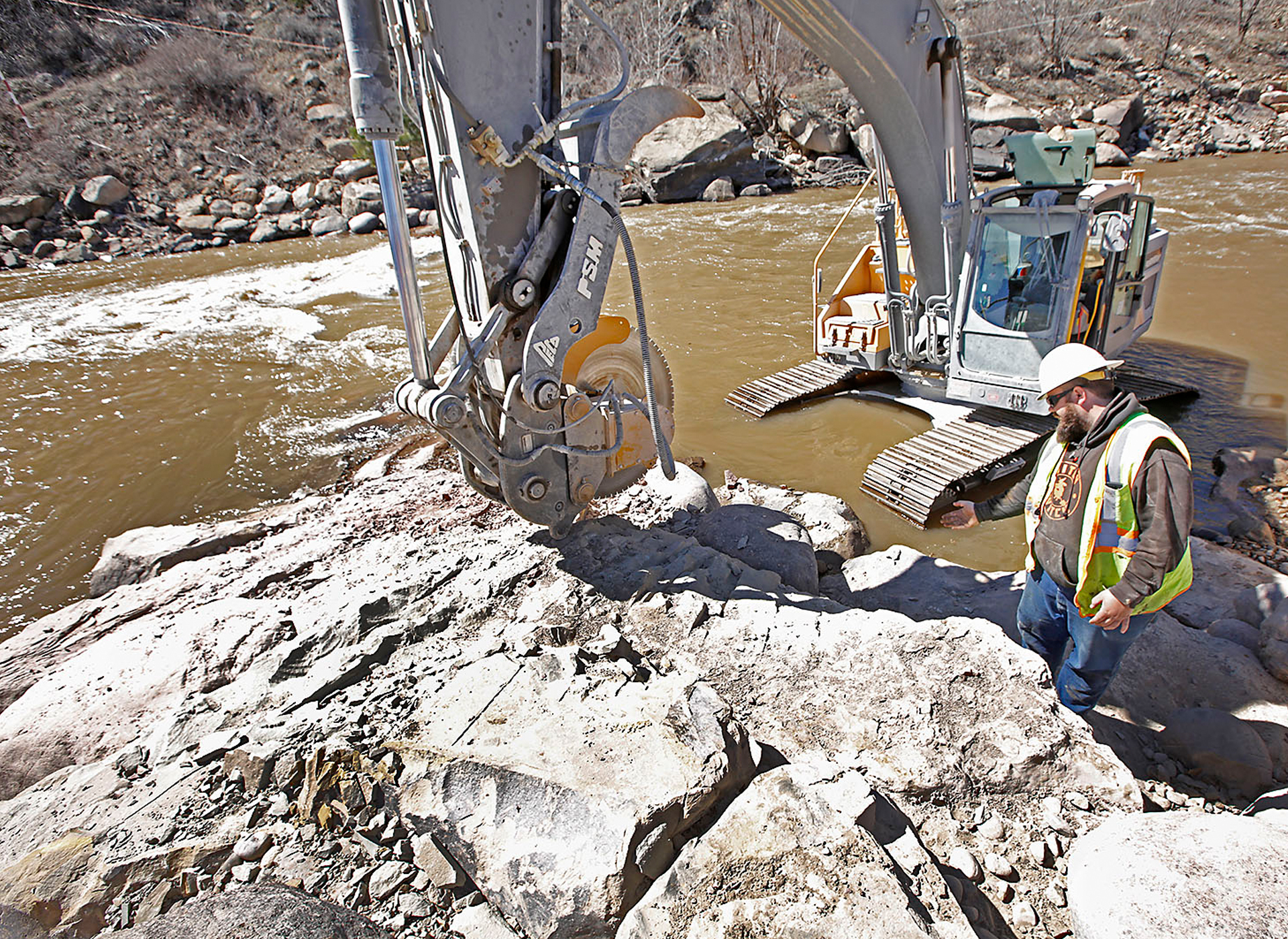 When making minor adjustments to the man-made rocks, precision is paramount.