Volvo breathes life back into the Chesapeake Bay

However, some of the Bay’s habitats, such as wetlands, remote islands, shorelines and submerged aquatic vegetation, are in dire need of restoration. Islands are particularly at risk; once many in number, few remain to this day due to a variety of natural processes, largely erosion.

Poplar Island, located 34 miles south of Baltimore, Maryland, is a prime example. According to a survey taken in 1847, the recorded size was 1,140 acres, but by the 1990s, the land mass was no larger than five acres. The complete disappearance of the island seemed imminent.

However, today Poplar Island is a national model of environmental restoration thanks to the Poplar Island Project Team, made up of the US Army Corps of Engineers (USACE) Baltimore District and Maryland Department of Transportation’s Port Administration (MPA). For nearly two decades, the team has used dredged material from the shipping channels that lead to the Port of Baltimore to rebuild Poplar Island and keep the channels open.

In addition to restoring Poplar Island to its 1847 footprint, a 575-acre expansion is underway. When complete, the total size will be 1,715 acres – 50% larger than its original size.

Celling a dream
Part of the project involves restoring the island’s natural habitats to preserve the Bay’s rich ecosystem for the future. To do that, MPA has brought on board Maryland Environmental Service (MES), an independent state agency. MES is responsible for constructing two habitats: tidal wetlands and uplands, both of which are in keeping with the surrounding Bay watershed.

“To create the wetlands, the work is divided into manageable areas known as ‘cells’,” says Megan DiFatta, environmental specialist at MES. “There are four steps to building a cell. The first step is to build the dikes and inflow the dredged materials.”

Poplar Island receives between 2 to 3 million yd3 of dredged material per year. It has received more than 30 million yd3 to date and will need 68 million yd3 in total.

“The second step is crust management (drying out all dredged material to create a crust on top),” says DiFatta. “The third step is to create tidal flow by excavating channels in the ground before laying down pipes that connect to the Chesapeake Bay. This allows high tide to enter and low tide to recede, which is important as it rehydrates the earth and allows for planting. Once the groundworks are complete, the creation of the habitats will begin. This is step four, and will involve hand-planting 540,000 plug plants per cell. It is estimated that the overall completion date for the project will be 2044.”

Treading water
Carrying out a heavy-duty project on an island is no easy task, as Brad Fruh, operations manager at MES explains: “A boat is needed every day to transport workers and equipment. Some guys work lengthy shifts, and because most of our work is done in the winter, transportation can be tough.”

When it comes to the construction work itself, the elevation of the wetlands is another challenge. “The Bay and most of the completed cells are only about a 3-4 feet deep, so a lot of the channels that we cut are below sea level,” continues Fruh. “Due to constant water infiltration, a lot of the areas we’re working on remain wet, no matter how much we trench or pump.”

An idea that floats
The volume of water is a constant challenge during habitat construction. MES needed machinery that could operate in the cell without sinking into the soft earth. Enter the specially-modified EC300E amphibious excavator from Volvo Construction Equipment. 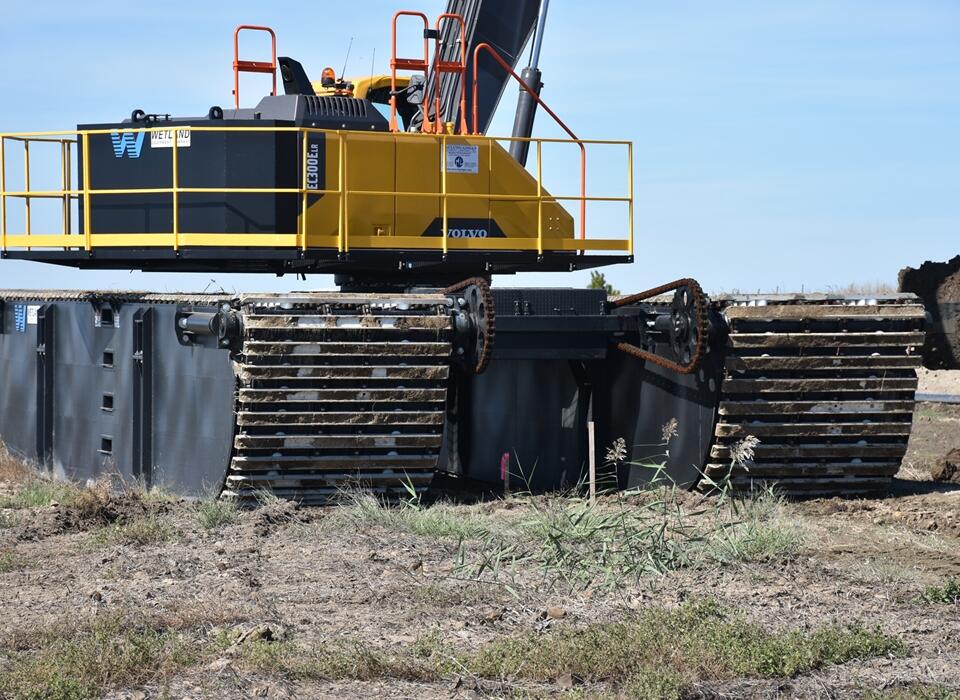 “The pads are hollow inside, and have wide and thick tracks to dissipate the down pressure, allowing the machines to effectively float on the soft terrain,” says John Mirabile, equipment fleet manager at MES.

Jamie Reid, territory manager for McClung-Logan Equipment, was able to provide a faster, turnkey solution for MES by working directly with a pontoon supplier. “Volvo shipped the EC300E upper-carriage directly to our third-party vendor in Louisiana, where they were to build-fit everything from the ring gear below. That gave them an opportunity to test the complete assembly before the excavator was delivered to our Baltimore dealership,” he says.

Headquartered in Baltimore, Maryland, McClung-Logan has been a leader in the mid-Atlantic region for heavy equipment sales, service and rentals since 1939. Currently the dealership operates eight full service branches across Maryland, Virginia and Delaware.

Jason Doty, an experienced MES equipment operator, is impressed with the EC300E’s performance. “The cab has plenty of room, the hydraulics are very quick and smooth, and the engine has a lot of power,” he says.

MES uses up to six Volvo A25 articulated trucks (including the latest G-series) at any given time, depending on the task at hand. Common jobs include shifting the dredged materials and moving sand from the staging areas to the dike areas. The machines are now in non-stop use around the island and making the heavy-duty work feel a little lighter.

MES now has almost 40 machines operating on the island, seven of them are Volvos. “We look for several things when choosing new construction equipment: quality, innovativeness and pricing. Volvo ticked all those boxes,” says Mirabile. “And we receive great service and parts availability from McClung-Logan.”

Maryland Environmental Service utilized a governmental buying program, NJPA (National Joint Powers Alliance), to purchase the pontoon excavator. NJPA is a cooperative purchasing program for governmental agencies. Buyers can satisfy the bidding process and directly select products, including construction equipment, from a list of awarded companies. All Volvo products are included in the NJPA program.

“What these buying contracts do for us is simplify the buying process,” John says. “The discounts are already locked in, and we don’t have to go through the very complicated process of putting together a book of specs and send out for bid. What it does is help us to get quality equipment at a very good price.”

Even though the EC300E was a modified machine, it still fit within the parameters of the program.

Says Kathy Tedone, Volvo government buying contract specialist, “Buying contracts offer the flexibility for governmental agencies to purchase what they want, from who they want, at the most competitive pricing available while saving them time and money with the assurance that the equipment manufacturers have satisfied the open solicitation process requirements.”

Planting a paradise
With a fifth of Poplar Island’s habitat already restored, scores of the Chesapeake Bay’s most sensitive bird species are already returning to nest, as are many diamondback terrapin, which are native to the region. The project has also gained international attention, with delegations and tourists from all over the world visiting the Bay each year.

“We have a long way to go, but it’s great to see that the island is already beginning to return to life,” concludes Megan DiFatta. “It’s a really special project to be a part of.”

Volvo excavators breathe life back into the Chesapeake Bay