Volvo A60s Deliver More Payload and Speed for U.S. Silica at Every Turn

In June 1998, an experiment to access gas trapped over a mile deep in the Barnett Shale north of Fort Worth, Texas, using sand, water and chemicals ignited a natural gas boom that rippled across the entire continent. Hydraulic fracturing – or fracking – injects high pressure liquid and sand proppant into boreholes deep below the surface to open veins and extract petroleum.

Twenty years later and a few hundred miles south of Dish, a U.S. Silica quarry is churning out a highly-sought fine grade of frac sand that increases the amount of gas extracted. The finer granules penetrate minuscule fissures in the rock to allow access to hidden reserves. The demand is motivating US Silica to triple output of production, with heavy reliance on an upgraded fleet of Volvo A60H articulated trucks and EC750E crawler excavators.

Terry Lackey, Plant Manager for the U.S. Silica Tyler site, explains the geology behind the sand. “This deposit is unique. The grain size is 100 mesh and 40/70 mesh, which is in high demand in the oil field right now, and our quarry is perfectly situated close to the East Texas oil field so we can distribute the product quickly and at a low cost.”

Sand is trucked within a 100 mile radius and loaded onto rail cars and sent to the West Texas oil fields.

US Silica purchased the 1400 acre site in 2016 from New Birmingham, Inc., and began investing in employees and mobile processing equipment. U.S. Silica owns 15 quarry locations across the United States and Canada, and is a leader in industrial mining products, contributing to the oil/gas segments, glass, building product industries.

“Initially the plant in Tyler was producing one million tons a year and with increases in the oil and gas market, management made a large capital investment to ultimately increase output to 3.2 million tons per year,” says Terry.

To meet the new volumes, US Silica evaluated its mine fleet to handle the surge in production and extended haul roads. They also expanded its wet and dry plants, increased storage silos and added tuck lanes.

Tyler sits at 500 feet above sea level. Quarrying becomes more of a dredging operation than open pit due to the ponds that form from being close to the water table. The water-laden sand strains mobile equipment, and was a concern as U.S. Silica debated how best to adapt to the volume increase.

The quarry relied on a convoy of five Volvo 40-ton articulated trucks to navigate the curving haul road from the mining plate to the wet plant. To nearly triple output, the options were to add 40- ton trucks or switch to rigid haulers, which are better suited for flat, straight distances – not exactly a match.

Then a new solution hit the market.

Volvo introduced the A60H 60-ton truck in September 2016. It was an industry-first, an articulating chassis with 50% more payload and even more operator and production perks than their current trucks. The A60H is rated at 216,935 lbs. max capacity, while the Volvo A40 max weighted load is 153,662 lbs.

The A60 articulated truck seemed a logical choice for U.S. Silica but local Volvo dealer, Steve Breeden with ROMCO Equipment, Longview, knew it would have to prove its worth in the quarry environment.

He says, “U.S. Silica wanted to assess cycle times to see how long it took to travel from various points of the quarry to the wet plant as well as how much tonnage it could carry under these conditions, and if the ground could support a full payload.” 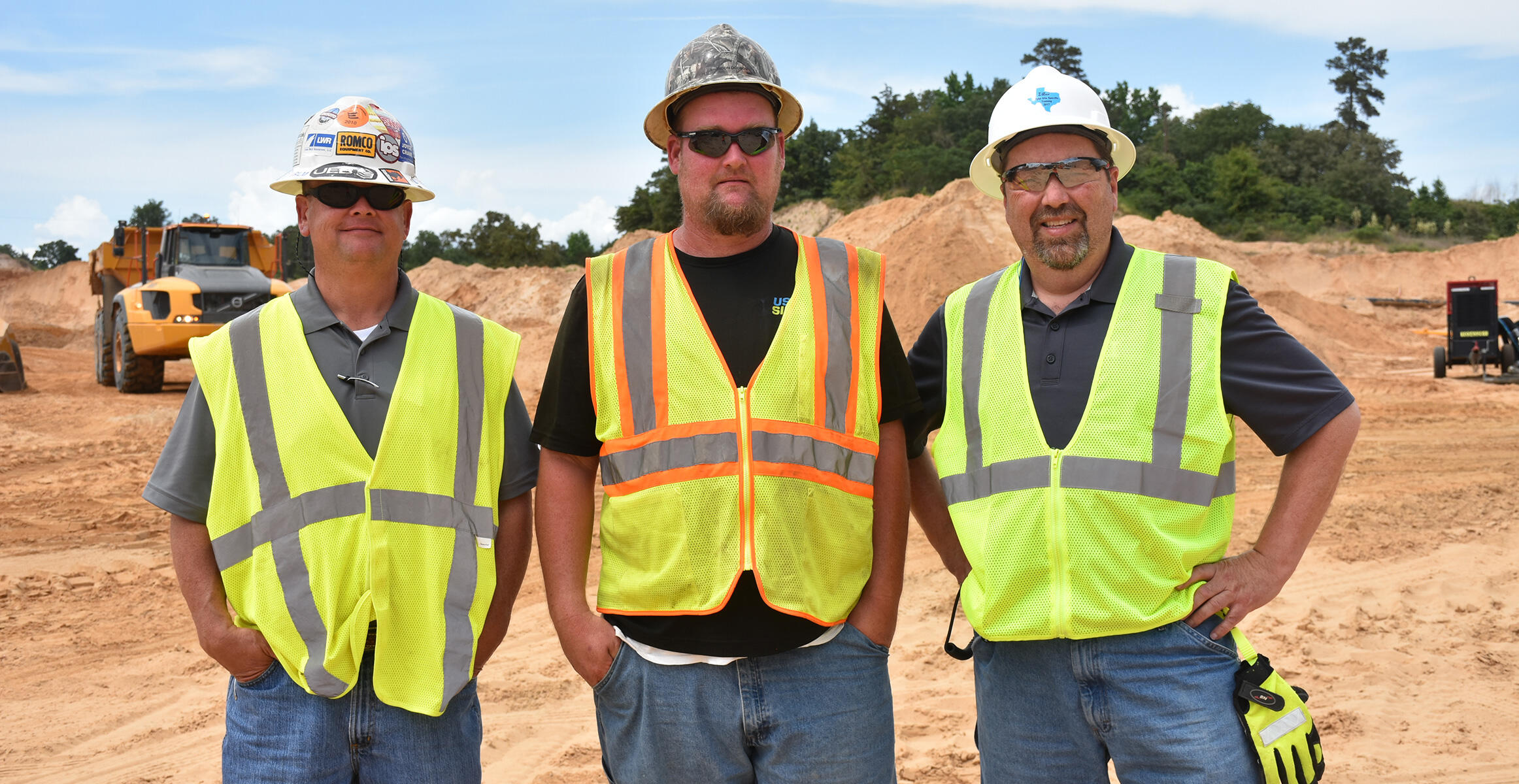 Product experts from Volvo Construction Equipment conducted a side-by-side demonstration of the A60H against the A40G. The potential productivity increases gained from transitioning to an A60 fleet spurred U.S. Silica to bring plant managers from other quarry locations to observe the demo.

The Volvo team rode in trainer behind the A60 and A40 operators, who also were getting their first tastes of what the hauler could offer beyond more payload.

Speed was crucial for U.S. Silica. Based on their experience with rigid haulers, larger trucks typically equated to significantly slower cycle times. The plant managers watched as the A60 quickly shelved that perception.

The hauler’s active hydraulic front suspension front suspension allowed the operator to keep pace with the A40s (that do not have suspension) and build higher speeds on the return from the plant. The A60’s size fits comfortably within the haul road, as its dimensions are only within a foot and a half wider and taller than the A40s.

Despite the soft sand terrain, rolling resistance for the A60 was a stable 5%, comparable to the 40-ton articulated trucks. This was due to the choice of tire and the Volvo D16 engine that produces 2,360 lb.-ft. of torque at just 1050 rpm.

Says Steve, “With the A60s we can get 20 more tons per load in roughly the same time to the plant as with the A40s. A larger truck does not mean slower speed due to the full front suspension and powerful Volvo engine.”

The results on paper proved out how the A60 could meet the Tyler site’s volume targets. Over the next few months the quarry resized its fleet to five A60s and two A40s. The other half of the performance equation is the loading tool. Since the demo, U.S. Silica purchased two Volvo EC750E excavators fitted with 6.9 yd3 Rockland buckets. Says Steve, “The Volvo outperformed the 90-ton competitor machine with double-digit faster cycling times. They were so impressed with the EC750 that they bought two.”

What happens inside the cab equally impacts performance. U.S. Silica operators upgrading to the A60s found the larger trucks kept pace with the A40s with added perks to give a smoother ride over a12 hour day. Volvo familiarized the drivers with a day of operator training.

Christopher Milles operates a haul truck 10 hours a day, five days a week for the past four years. “It’s no longer like riding in a go kart. The front suspension handles the road dips and potholes a lot easier. You don’t get beat up in the cab. Everyone who drives the A60s loves them.”

Says Terry, “As plant manager, the most important things to me are uptime and reliability. ROMCO has made sure we have had minimal downtime. And another big benefit with the Volvo equipment is fuel efficiency. They are by far more fuel efficient in terms of fuel economy. It’s been a good partnership between Volvo and U.S. Silica for a good, clean environmental solution.”

Since the first Tyler demo, U.S. Silica has added nine A60s to its operations nationwide and is seeing similar leaps in hauling production. Wendy Knapp, Sr. Director, Corporate Procurement, cites the strong partnership with Volvo and Volvo CE local dealers nationwide. She says, “U.S. Silica’s strong partnership with Volvo enabled us to get the A-60’s in a timely fashion into the plant when there was such a high demand across the US. The performance of US Silica’s Volvo fleet across multiple plants has proven successful through strong relationships at both the national and local levels.”