Volvo A60 and EC750 deliver hard numbers for Pennsylvania quarry

The pace of a quarry shakes down to cycle time and uptime. At Wilkes Barre Materials, an Affiliation of American Asphalt Paving and The H and K Group, thousands of tons of premium sandstone are moved daily. The speed it passes from pit to crusher to load-out is set by a Volvo EC750E excavator and A60H articulated haul truck.

This 140-acre quarry, seated deep in the anthracite coal region of Pennsylvania, is in its second life. A coal mine in the early 20th century, the quarry passed through several owners before restarting in 2006.

Instead of coal, today’s prized ore is Class E sandstone, some of the highest quality in Pennsylvania. This sedimentary rock is coveted by road builders for its hardness and sharp angles on each particle that grip tires and give asphalt strong, anti-skid properties.

As quarrying chewed further into the seam and away from the primary crusher, lag time between loading and hauling stretched to over a quarter mile. Site superintendent Todd Romanczuk needed more efficient equipment to tighten cycles and boost production.

“It all comes down to speed and cycle times. The excavator we had was slowing us down. When you have high volumes with wait times, you are burning fuel and not adding revenue,” he says.

Todd and equipment manager Mark Wesolowski pitted their unforgiving quarry against the top production machines in the industry. The replacement equipment had to perform well and add hard numbers to the bottom line.

Their Volvo CE account manager, Joe Rick with Highway Equipment & Supply, had worked with the company for over 18 years. In the period since their last machine purchases, the EC750 and A60 came to market. Joe seized on this opportunity to introduce both to the quarry. 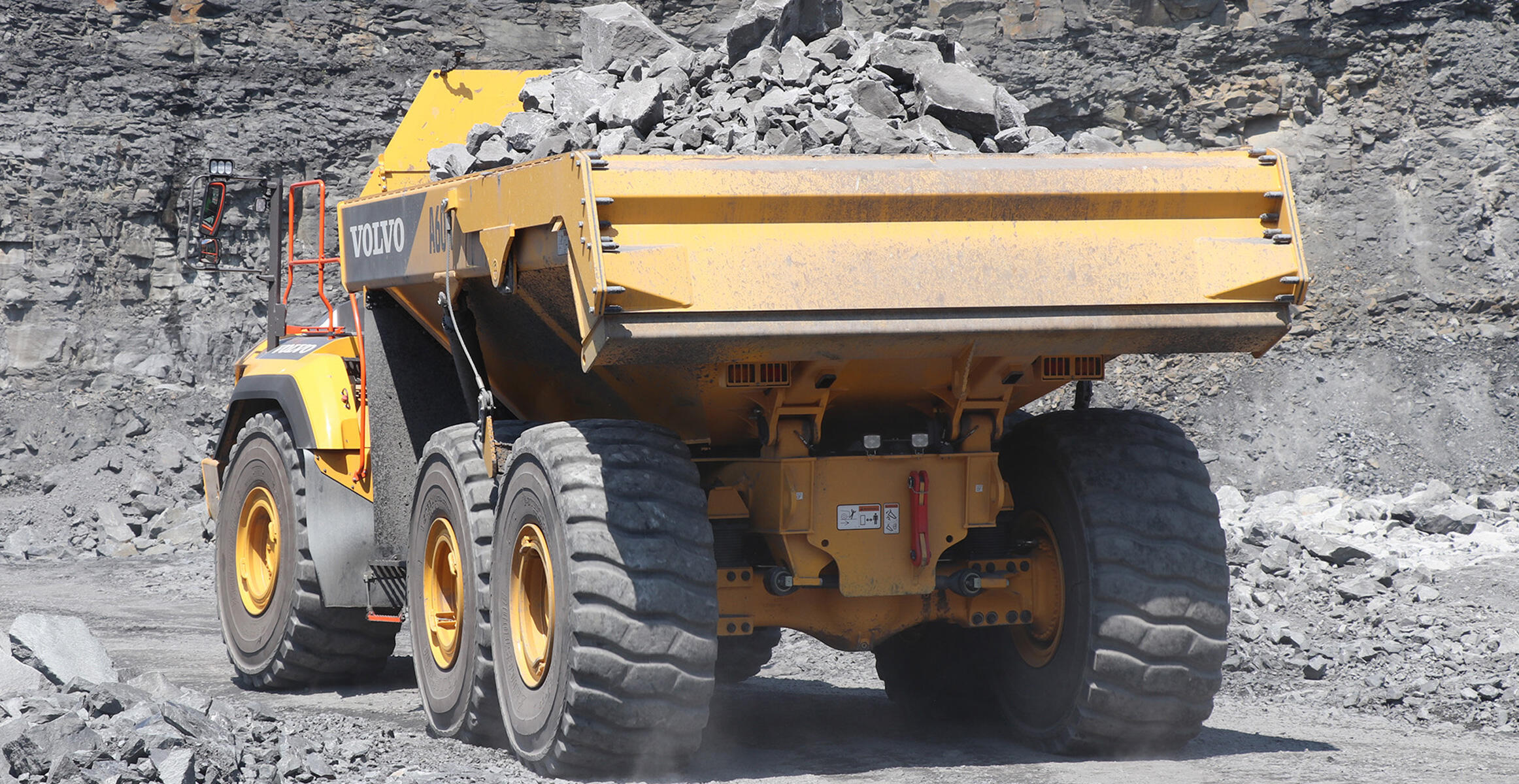 “At the time, they were using a Cat 365 excavator and two Cat 771D rigid trucks, says Joe. “Some of their pain points were uptime and availability of getting material to the primary crusher.”

Joe used Volvo’s Site Sim program to vet the fleet configuration before the field test. Various data points are loaded into the quarry simulation system to recommend which combination of Volvo machines will best match the scenario and goals. Site Sim also factors in other operating and ownership costs to give a total cost of ownership (TCO) calculation. This includes depreciation schedules, service plans, tire replacements and maintenance costs.

The demo took place when the quarry was expanding the current ore seam. The equipment carved through a dense top layer of coal to reach the next gradation of sandstone. The takeaway: the EC750 and A60 Volvo machines shaved two minutes per cycle over the Cat 365 and Komatsu PC390-11. 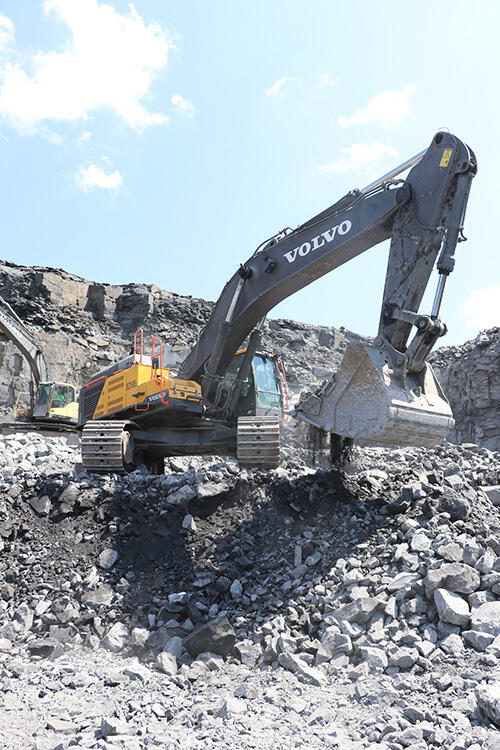 A bonus is the excavator’s maneuverability and stability as it works along steep ledges. In many places, the operator is digging 18 feet deep, but the EC750 effortlessly lifts and swings 180 degrees with full buckets to load the truck.

Mark was sold on Volvo’s ironclad excavator guarantee. “Volvo has an excellent warranty on the boom, stick and undercarriage for the life of the machine. In this type of work, sticks are prone to crack, so that quality guarantee is huge,” he says.

Having spent years in the seat, Todd vouches for the excavator’s comfort. “We are here 10-14 hours a day some days, so you have to be comfortable. And with the ease of having the joystick at your fingertips instead of reaching for levers, you just don’t get fatigued. At the end of the day, it’s nice to step out of that machine, see the amount of product you moved and not be tired.”

The A60 with full front suspension is equally cushy. He says, “I’ll admit, when you first walk up to the A60, it’s massive, but as soon as you get in, the air ride seat rises up, it’s like sitting in a gravity chair. The hauler operator is 73 years old and he just loves that truck. It’s a beautiful piece of equipment.”

The EC750E averages six buckets to load the 43.9 yd3 hauler bed. The A60 is fitted with a tailgate for extra load retention. It pulls effortlessly up 11% steep grades with the stout but fuel sipping Volvo D16 630 hp engine.

In total, Wilkes Barre Materials owns seven Volvo machines at the site, including two A40s, an EC380, and L180H and L250H loaders.

Says Todd “It all comes down to power and cycle times. That is what won us over.”

Volvo A60 hauler and EC750 excavator heavy hauling at quarry