SYB Construction’s Volvo excavators are a familiar sight to commuters on the jammed interstates between Dallas and Fort Worth, Texas, and the cozy side streets of the residential neighborhoods from Grand Prairie to Carrollton.

Randy Bennett, vice president and secretary for SYB, remembers a starker time. “In 1985, my parents and I started our company with zero equipment, a couple of pickups and $7500 between us. We had nothing. But we had a dream.”

Today, SYB Construction (named for Randy’s mother, Shirley Yvonne Bennett), is at the forefront of utility and paving work in the DFW metroplex. Over 33 years, they have formed lasting relationships with municipalities, private developers, residential customers, and larger nationwide construction companies. With a portfolio of projects topping the $15 million range, SYB prides itself on delivering superior work while subtracting weeks from general contractor schedules. (They still stamp their logo and project year into concrete curb-work).

Jarred Walker, outside sales representative with Volvo Construction dealer ROMCO Equipment, took notice of SYB years ago. He says, “Being in the DFW territory for a long time, I know who the influential customers are in this part of Texas. In the underground utilities segment, SYB is that customer.”

Randy admits he didn’t extend the welcome mat to Jarred or Volvo.

“As we built our company up, we didn’t have as much equipment so it was not a major deal what brand we bought. We never paid attention to Volvo because you had the ‘Big Two.’ We were dedicated to one major competitor and bought a couple pieces from the other when equipment wasn’t available. Then I had this Volvo salesman who kept trying to get in my front door,” he says with a nod to Jarred.

Turns out Jarred needed to wait for a different door to open.

As a teenager growing up in Nebraska, Randy worked for the local Mack Trucks dealer. That loyalty is still reflected in SYB’s line-up of brawny Mack Granite tri-axles (with Mack now part of the Volvo Group). Randy’s best friend since high school had a contact from those days who now worked for Volvo Trucks, and he cajoled Randy to try a Volvo excavator.

Randy met with Jarred, half out of curiosity and half to pacify his old friend. 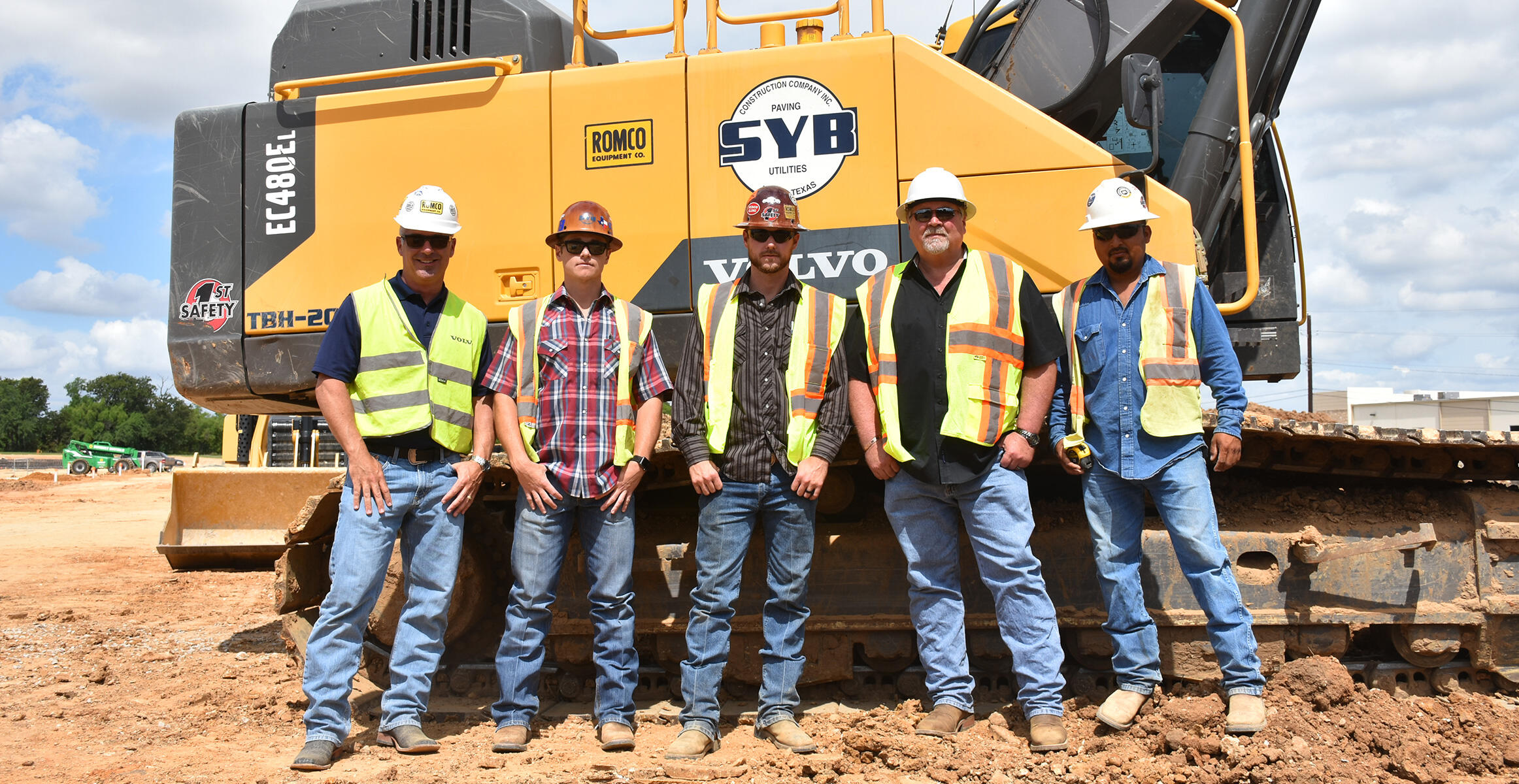 Says Jarred, “Since SYB performs a lot of utility rehab work in residential and high traffic zones, a zero-turn excavator is their hot button machine. It made sense for me to go in with the ECR235. Volvo makes a very good zero turn so it’s easy to go in to a new customer with confidence.”

Says Randy, “We did a demo, then cut a deal on the ECR235C. We were very impressed with the speed and power. That was in 2008, and as the years went by what we were more impressed with was with that excavator and the others that followed we had zero maintenance issues. The original ECR235 is still at work with over 16,000 hours.”

SYB buys for the long haul. Randy explains, “We take a new machine and it becomes our primary production unit. As it gains hours we relegate it to backfilling, then move down to concrete removal. We probably get a lot more use from our equipment than other contractors.”

Over the last decade SYB Construction has transitioned its excavator and wheel loader fleet to 100% Volvo.

Longevity extends across SYB’s operations. Now a third generation company, Randy’s sons Tyler and Logan are waist-deep managing multiple projects across the metroplex alongside their father. Their experience started when they were waist-high.

Says Tyler, “The first job I remember was in Arlington. I was riding along in the truck with my grandpa.” 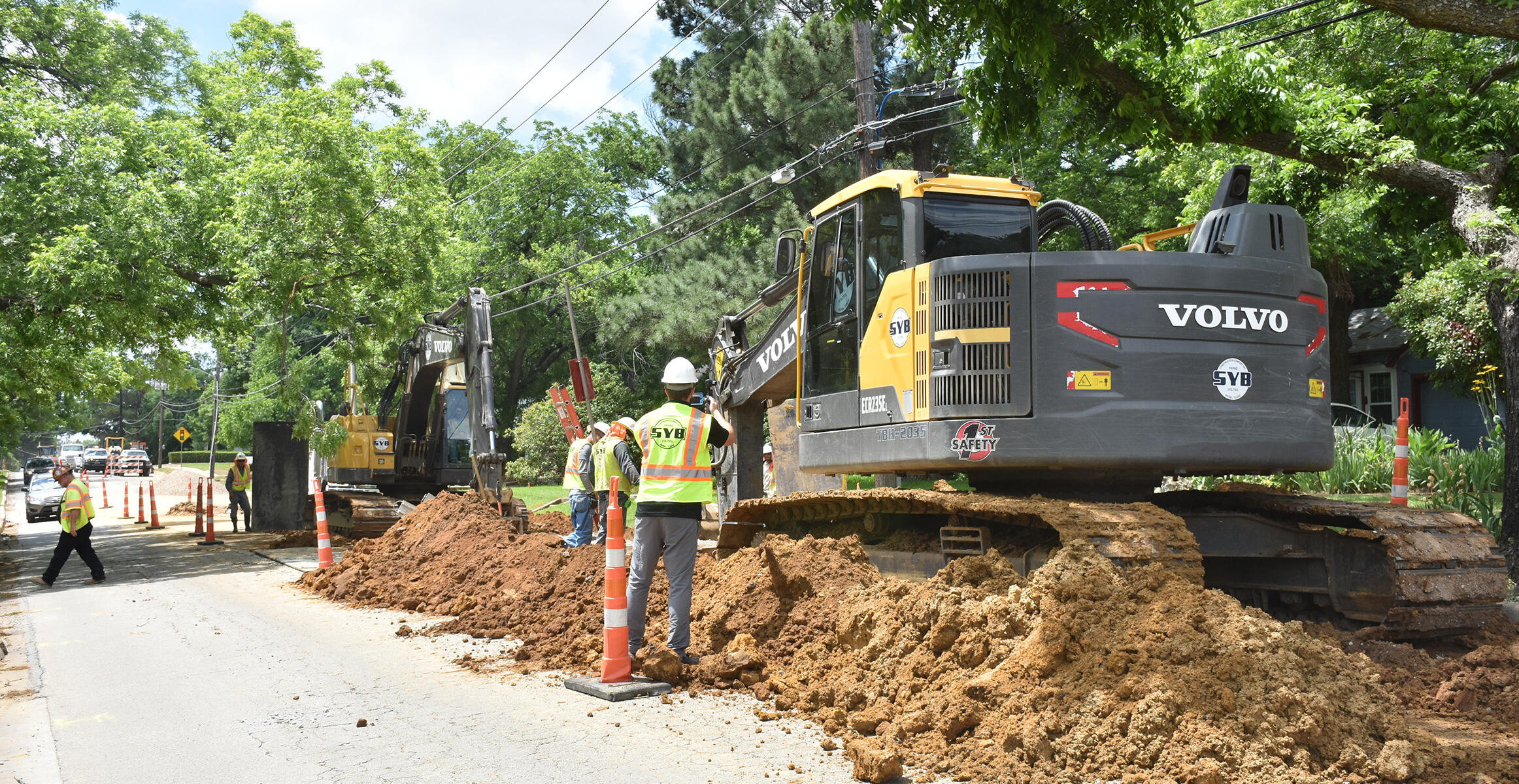 Twenty-years on, Tyler is back in Arlington overseeing a water line project placing 5000 feet of 12-inch and 1000 feet of 16-inch pipe and valves. “Working in these congested areas, with the ECR235 you don’t have the overhang of the counterweight when they swing into traffic lanes.” (The ECR235E has a compact 5’ 11” tail swing radius.) This helps SYB keep construction disruption to a minimum - and sparks appreciative comments from drivers and residents on the SYB Facebook page.

Size matters, but so does the performance of the Volvo short swing excavators.

Adds Logan, “One machine down can shut down the whole crew cost thousands of dollars a day. There’s a lot of pressure from my ‘upper management’ to get the job done on time, and the GC’s definitely want to keep to their schedules as well. Randy holds his sons to strict standards, “I make them sit across from each other in their office so they can work things out.”

Logan earned his associate degree in construction management and became an estimator for SYB, but shortly thereafter asked his dad to send him to the field.

Says Randy, “We have a true family organization. Both of my sisters and my brother-in-laws also work here and we have employees who have been with us from the start. We don’t have a lot of turnover and that’s a pretty good indicator. The people working for you are your biggest asset.”

SYB Construction started with zero dollars and a dream. Today they are one of the fastest-growing utilty contractors in the Dallas-Fort Worth metroplex. They rely on a fleet of Volvo short-swing excavators to get the jobs done.