A limestone producer in northern Kentucky is setting higher standards for underground mining with inventive techniques and a lean fleet of Volvo Construction Equipment.

Sterling Ventures owns 1000 acres of rolling mountain land outside Verona, 30 miles south of Cincinnati. From the surface, it appears to be a substantial crushing operation with voluminous stockpiles of sized stone fed from the mouth of the mine by a race-track style conveyor system.

The core action takes place underfoot, where round-the-clock crews pull more than one million tons of limestone out of the ground each year from three mining levels.

“We believe we are one of the largest underground limestone mines in Kentucky based on our deposit size,” says Timothy Stout, Chief Operating Officer, “Having deposits on three levels gives us tremendous access to reserves that will last several hundred years.” 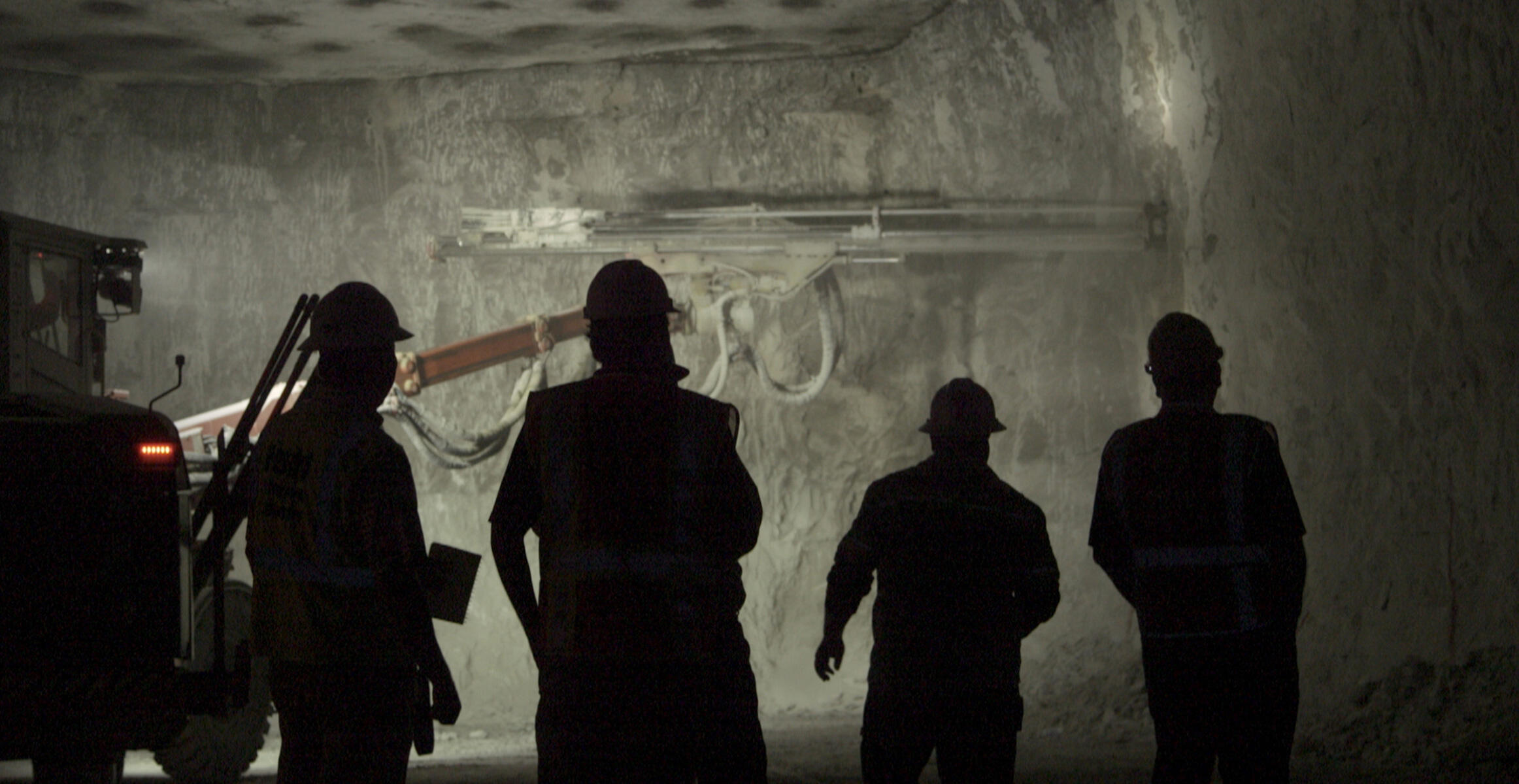 What started in 1999 as a greenfield site to supply stone to the aggregates/building materials market took a more lucrative turn when a seam of high-grade 97% pure calcium carbonate was discovered deep in the mine ten years later, resulting in Sterling developing the third mining level.

That find led to a lime kiln (owned by an outside company) locating directly onsite. The kiln fires the chemical limestone to 1800° F to convert into a product used by the steel industry to make slag (which removes impurities from the iron ore reduction process), and by water treatment plants to adjust pH and alkalinity.

The challenge was in chasing this vein of high calcium limestone, which runs over 900 feet below the surface, and moving it efficiently up three levels to the surface. Managing the new dynamics of the mine meant rethinking the workflow and mix of equipment, as the kiln operates 24/7 all year long.

It’s a continuous cycle of drill, blast, scale, muck, haul and crush for the 44 employees who work 10 to 12-hour shifts and for the equipment that log 24-hour continuous operation. The mine is laid out in quadrants and mined “room-and-pillar” style. As the crews drill horizontally into the seams of rock, pillars of untouched material support the roof overburden. The opened rooms, approximately 40 feet high x 40 feet wide, are extracted of blasted rock.

Whether open pit or underground mining, cycle times dictate production. As the haul roads out of the mine turned into miles, Sterling took an uncommon approach and installed two underground primary crushers on Levels 1 and 3 and, and built an underground plant to specifically process the high calcium stone for the kiln. Over 24,000 feet of conveyors are used to shuttle the stone through the mine and then to the surface. The crusher systems were dismantled, transported below ground then reassembled to fit around the pillar ribs. 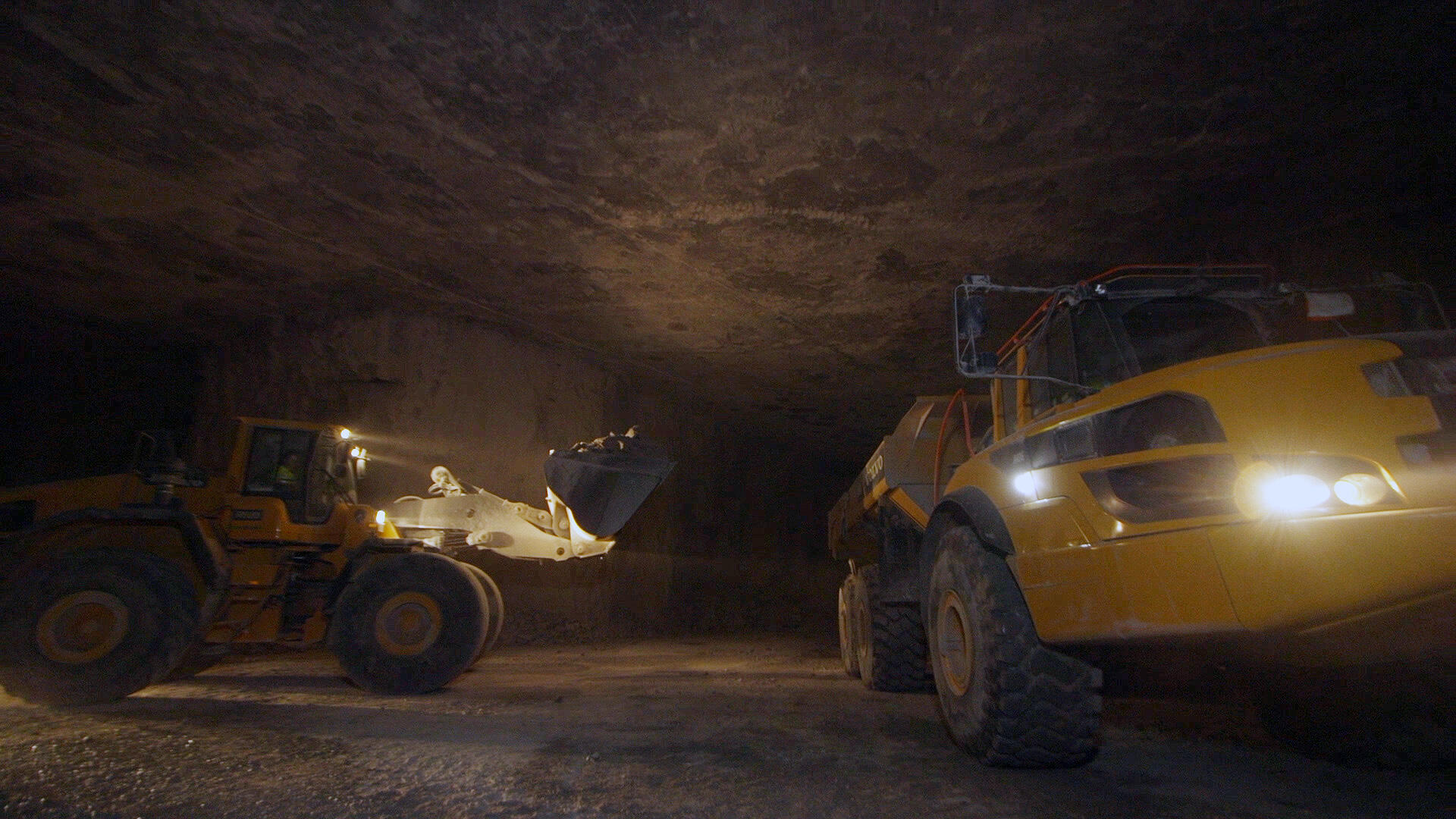 The minimal fleet of haul trucks, loaders and excavators at the Verona mine are all Volvo. “Three years ago as part of a review on all of our equipment, I did a detailed analysis of the three main heavy equipment manufacturers on fuel burn, warranty costs and preventive maintenance. I settled on the Volvo articulated haulers and excavators because they give us the right technology mix to not only be effective and efficient, but profitable,” Tim adds.

It took Tim a little longer to run the numbers on wheel loaders, but in the end he also switched brands, choosing Volvo L220G models based on an analysis of fuel burn, tire wear, maintenance costs and lease versus buy math. Today Sterling’s Volvo equipment line-up includes:

Says Tim, “A big factor in selecting equipment is our relationship with our dealer, Rudd Equipment ,and Josh Curtis, our sales rep, have been an instrumental part in our business relationship. They perform all preventive maintenance work and check with the operators to see what is working well and what isn’t. They have come up with ideas to use equipment that from an old school mining point of view we may never have thought of before.”
Located in the heart of Appalachian mining country, Rudd is one of the oldest Volvo legacy dealers in the United States, dating back to the 1950s when they sold Clark/Michigan loaders (purchased by Volvo in 1985). Today they operate 14 locations across Ohio, West Virginia, Pennsylvania, Kentucky and Indiana.
For a company open to ingenuity, like Sterling, a little investment offers long-tail returns. Says Josh. “Tim is very hands-on when looking at buying equipment. We reviewed specs, productivity, fuel burn and in all of these areas, Volvo has the advantage. That helped us build more business with Sterling.” The added value of Rudd’s central warehouse with parts on the shelf was also a big selling point.

The dynamite is loaded into casings in a specific order to produce a shot with consistent rock. This is determined by a carefully constructed pattern and timing of the individual explosions.

“Each face is packed with 29 casings, and each shot brings down approximately 1400 tons of limestone. The crew aims for 8-10 shots per day, set off after the first shift leaves the mine around 5 p.m.,” says R.L. Maxwell, Mine Superintendent. Two seismographs measure and record the ground and air vibrations from each blast.

The two-hour lag between shifts gives any limestone gases time to dissipate. “The air quality is constantly monitored. That is one of the biggest safety concerns with underground mining,” says Steve Brierly, Senior Director, Safety and Compliance. The second hazard in a mine is loose rock. Here is where the Volvo excavator earns its reputation.

Before any load-out, a Volvo E340D and EC220E, both fitted with a Rockwheel grinder, scale away loose slabs of stone from the sidewalls and ceiling of the face. The excavators have factory-fit demolition guarding kit, including ROPS/FOPS guarding on the cabs.

Says Tim, “The reason we switched to Volvo is because of uptime. We can completely scale a 40 x 35 foot face in less than an hour, top to bottom. The power is unmatched. The Volvo excavators are also just more durable. For example, the track guards and reinforced undercarriage protect against abrasive limestone.” After the sides and ceiling are scaled, rock bolts are anchored to secure the roof from cave-ins.

For Steve the environment inside the equipment is as equally important as the outside.

“The air quality of a mine is everything. We monitor mine gases and record readings every two hours. The beauty of this equipment is that outside it can be layered in dust but inside the cab the air is like sitting in our living room,” he says. That is due to the 14 air filters in a Volvo excavator cab, the most in the industry. 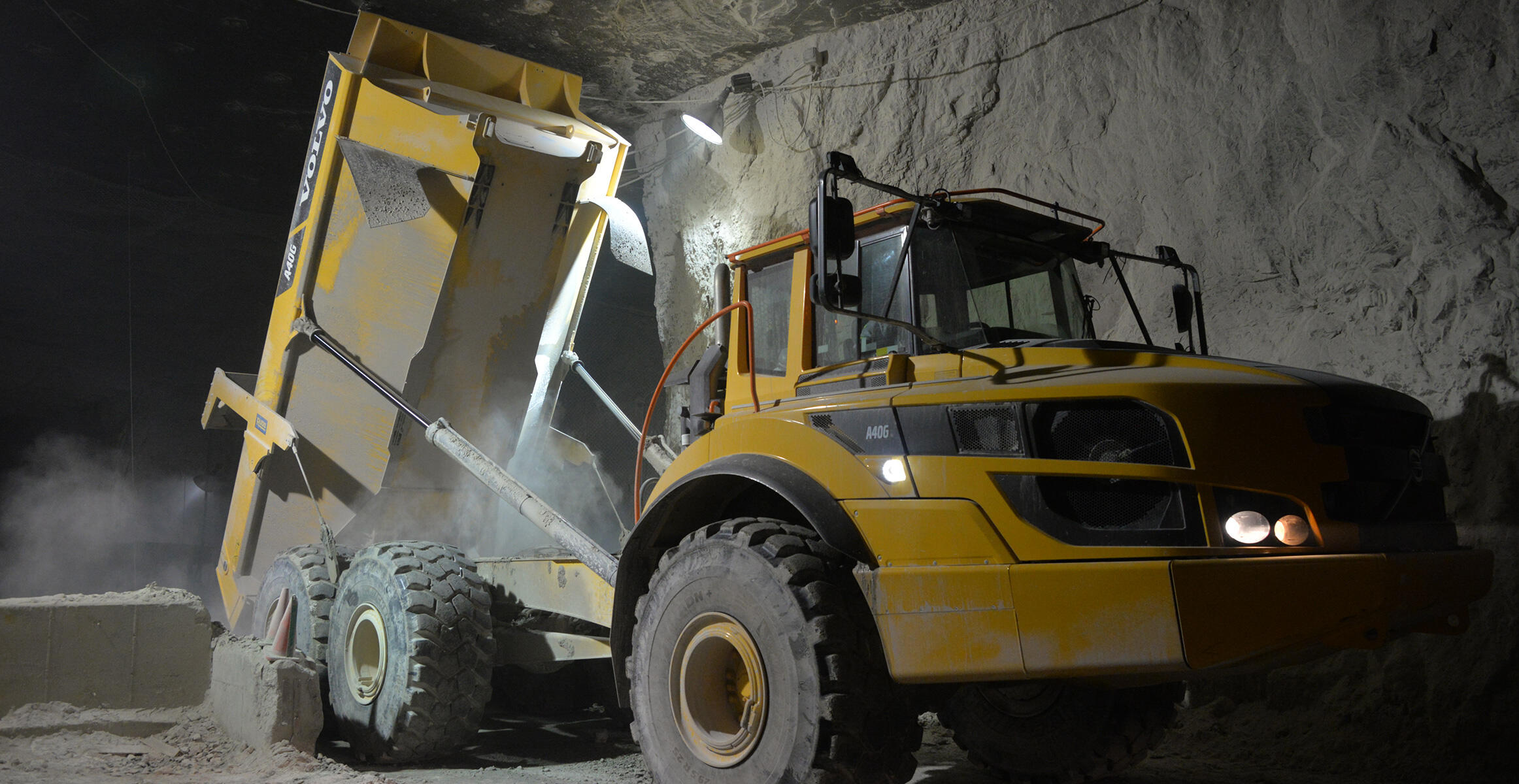 The haul trucks were selected for their capacity and handling and for the on-board weighing system to manage payloads and balance workflow. Their profile and articulating chassis can deftly maneuver around pillar ribs. The trucks move the rock from the face to the primary crusher on Level 3, a 4,800 feet round trip, on an uneven road that tends to undulate like the chemical seam. Operators may make 100 round trips a shift. “The automated traction control system on the Volvo artics is a must for us. We can’t get by without it.” says R.L.

Most days, crews enter when it’s dark and leave the mine when it’s dark. “Mining is not for everyone,” says Steve. Potential hires are taken into the lower depths of the mine to get acclimated before they commit. “If a new employee stays for a year and a half, we know they are hooked. It gets in your blood,” he says. “I’ve been in the mines for over 20 years and there’s nothing else I’d rather do than be underground. This is what I know, it is my passion. I enjoy knowing I’ve made a difference in the safety and health of this mine.”

And mining is also in the DNA of the Volvo equipment that withstands these tough conditions.

Mining on the Cutting Edge with Volvo Construction Equipment

A limestone producer in northern Kentucky is setting higher standards for underground mining with inventive techniques and a lean fleet of Volvo Construction Equipment.