Every day thousands of cars clog the main artery feeding the heart of Disney World. Central Florida’s Interstate 4 (I-4) highway is so congested and restricted that the traffic is (slowly) screeching to a complete standstill. A 2012 report from the Texas Transportation Institute ranked Orlando 13th in the US for traffic congestion, with more than 1.5 million daily trips on I-4. The report estimates that each frustrated commuter wastes about 45 hours per year sitting in traffic.

With Central Florida attracting 59 million visitors each year, transport experts agree that I-4 has become decrepit and is in need of a dramatic overhaul.

An analysis showed that the project would take 27 years to complete with Florida Department of Transportation (FDOT) funding alone. However, a public-private partnership, known as a P3, will allow the project to be completed in less than seven years. This agreement allows the FDOT to share financial risk with a team of private companies, which finance a portion of the project. 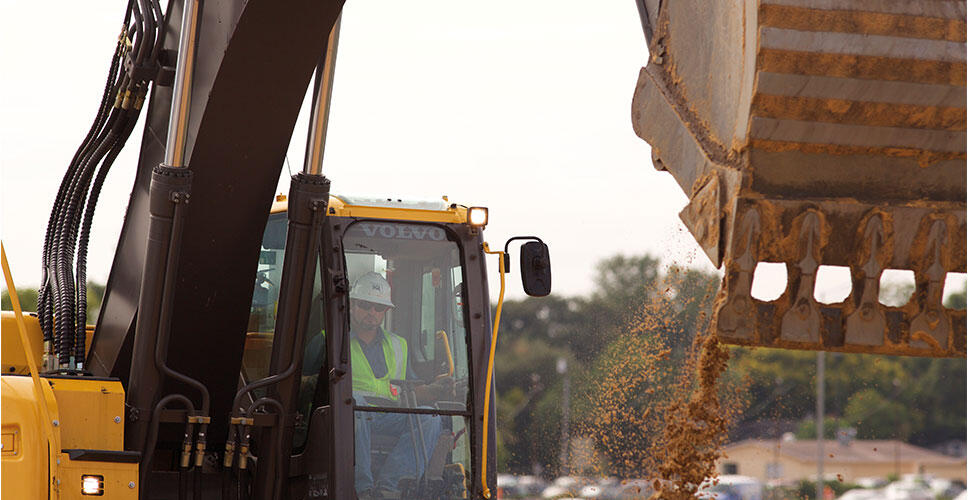 In an unprecedented partnership, three long-standing infrastructure giants – Skanska USA Civil Southeast, Granite Construction and Lane Construction, which together make up the construction joint venture SGL Constructors – are collaborating on a $2.3 billion (€2 billion) redesign and rebuild they call ‘I-4 Ultimate’.

Close to 2,000 workers will pitch in throughout the duration of the venture. The plans involve 140 bridges: 13 being widened, more than 74 replaced, and 53 new ones built along almost 34 km (21 miles) of the highway.

Project innovations include the use of recycled materials, such as existing concrete and limestone. Carefully designed landscapes, lighting, bridges, fountains and artwork are planned to make travel on the highway more appealing.

Urban highway surgery of this kind is dangerous, delicate work. SGL’s safety policies include granting every person on site the authority to stop work if he or she notices a potential safety problem. Jon Walker, assistant project director for SGL Constructors SGL says, this way, each person is encouraged to look out for everyone else.

“When we’re building safely and with good quality, we build productively, and meet our schedules,” says Walker. “And everyone goes home the same way they arrived.”

Eric Beer, assistant branch manager for the Orlando branch of Volvo CE dealer Flagler Construction Equipment, says SGL has ordered more than 60 Volvo machines for the job, including 31 single drum compactors – models SD45, SD75 and SD115 – and 32 hydraulic excavators that include the EC160E, EC350E and EC480E models, as well as the short swing mini excavator ECR88D and the short swing radius ECR235D. Beer says he anticipates more equipment will be ordered as the project advances.

The Volvo machines will work on clearing and site preparation, pipe-laying and bridge demolition, using Volvo HB450 Plus and HB2400 Plus hammers. Volvo excavator cabs are set up to make the most of operator safety, efficiency, comfort and control, with ergonomic joysticks, keypads and a digital information display.

“Safety is a huge part of what we do,” says Volvo excavator operator Ashley Laurance. “You want to come to work and then you want to go home safe to the family you’re working for.”

Laurance operates a Volvo ECR305C crawler excavator designed for safe work in tight places. Its compact body swings only a small distance beyond its track width. This is especially important on the I-4 project because much of the work is being carried out close to local homes and businesses, and many roads will be open to traffic during construction.

Laurance says he likes the excavator’s stability and weight distribution. “If you’re not sitting flat, or if you have a cave-in, you can actually roll a track hoe easily,” he says. “The tracks are a lot wider and more stable,” than other brands of machinery he has operated and he says the machines do not have the rocking effect of other track hoes. “The Volvos are not as top heavy – they balance themselves out nicely.”

Maintaining sensible boundaries
Safety is also a driving factor for operator John Cooks, who operates a heavy-duty Volvo EC480EL excavator. “You’ve got other workers around you, and their lives are in your hands,” Cooks says. “If you swing around, how far away are things supposed to be so that you don’t hit and damage them with your counterweight? It’s very important to know the boundaries of your machine.”

Cooks has his take on this human-machine interface. “You are at one with your machine,” he says.
Operators can press a button and do a diagnostic check, so if something is wrong with a belt tension or a hose is leaking, it all shows up. The machine senses it, picks it up and informs the operator. The system also keeps track of hydraulic fluid, oil and water levels.

Fluids and greasing are “the lifeblood of the machine”, according to Cooks. The machine’s automatic greaser takes a dirty job – yet critical one – off the operator’s hands.

“I’ve been on machines where people don’t take pride in their upkeep,” he says. “Having to take a grease gun in the cab, you get grease all over the machine and all over your clothes. The automatic greaser eliminates that problem.”

Raising the bar
Philip Hernandez, one of the equipment superintendents on the I-4 job, agrees with Cooks. “Preventive maintenance goes a long way when it comes to heavy equipment,” Hernandez says. He is responsible for the upkeep of approximately 1,500 machines on the project. Hernandez says he works closely with Flagler CE to make sure he has the right machinery for every job, and that all equipment is in good working order.

Hernandez says he counts on Volvo’s CareTrack telematics to show fuel burn rates and to monitor fluids, which make up most of the machine’s potential environmental impact. Oil, fuel, coolant, hydraulic oils and other fluids have to be kept from leaking onto the ground or into the canals around the I-4 site.

The project spans territory rich in waterways, fish, wildlife and sensitive environments. SGL says it is proactive in protecting natural resources, controlling spills and erosion at job sites as well as using Volvo Construction Equipment’s fuel-efficient, low-emission machines. More than 93,000 native plants, trees, and shrubs will be planted in concert with native grasses to create a signature corridor in the region. SGL has also established a waste reduction goal to reuse and recycle 98% of all construction and demolition waste generated by the project. 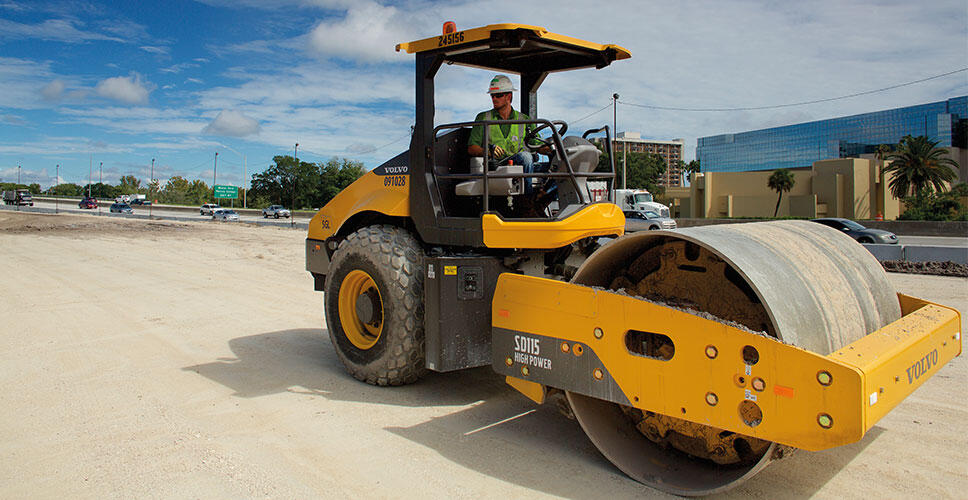 Operator Steven Brass at the wheel of his SD115 single drum compactor.

Safety at work
SGL’s safety-environmental manager Bill Reed is charged with protecting the work environment, and credits Volvo CE with supporting his success. As with Volvo Construction Equipment, safety is a core company value and culture, not a policy.

When SGL bought Volvo excavators, Volvo CE supplied an excavator training simulator that imitates the working environment with dynamic training exercises, explains Reed. “When we hire somebody who says they’re an operator, we can test them on the simulator.” Reed also says that there are not enough qualified excavator operators available, because of the enormous scale of the project. “We’re using the Volvo simulator to train our operators how to run things correctly. That’s highly important to the safety of this project,” he says.

Reed takes his safety role to heart. “Everybody who comes to work every morning needs to go home the same way as they came in. It’s important to me that we do things right.”

For supervisors, operators, visitors and the residents of Central Florida, Interstate 4 cannot only be the highway to the world-renowned attractions of Orlando. It must also be the safe road home.