Whether it is excellent or poor... a reputation is not hereditary, it cannot be purchased and no person or company is entitled to it. It must be earned!

From humble beginnings in 1929, France based Société Routière Colas (Colas Group), their global operations, as well as their North American subsidiaries, Sintra Inc. and D.G.O.C Ltd., continue to develop an excellent business reputation with customers around the world. This earned reputation has allowed them to establish and maintain their position a s a world leader in the construction and maintenance of transport infrastructure.
Roger Caristo and Michel Nault discuss the details of the next project on the steps of Sintra’s Montreal, Quebec head office.
There are many respected, customer centric similarities that can be drawn between the Colas Group and Volvo Construction Equipment. Founded in 1832 by Johan Theofron Munktell, the company known today as Volvo Construction Equipment is the world's largest manufacturer of articulated haulers and wheel loaders, and one of the world's largest manufacturers of excavation equipment, road development machines and compact construction equipment.

With both companies having a global impact on the construction industry, it is logical that the Colas Group and Volvo Construction Equipment would first establish and then continue to develop a mutually rewarding business relationship. One of the key regions where this relationship is paving the way for both companies is between Montreal, Quebec based Sintra Inc. and Mississagua, Ontario based Strongco, Volvo Construction Equipment’s largest North American based dealer group.

The two companies that amalgamated to form Sintra Inc. were created in the 1920s and 1930s in the Province of Quebec. In 1927, Antonio Fabi founded Fabi & Fils, Entrepreneur Général in the City of Sherbrooke. Then just over a decade later, in 1939, Milton E. Hart created Modern Paving (Quebec) Limited with plants in Warwick and Saint-Flavien. Fabi & Fils’ field of activity was general construction, roads, bridges, sewers and sidewalks, while Modern Paving specialized in the production of aggregates and the manufacture of hot mix asphalt and the paving of streets and roads.

Carl Ouellet and Maxime Carier go over the numbers on the Trans Canada Highway expansion project. 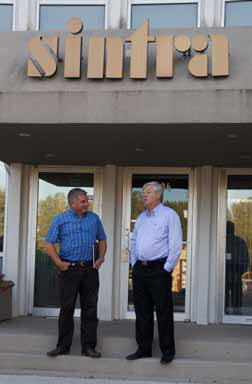 However, it wasn’t until the early 1960’s that a group of affiliated French companies, including Société Routière Colas S.A. began to identify new road construction investment opportunities in the Province of Quebec. In January 1963 this French group announced that they had purchased the majority of the shares of Fabi & Fils Limited.
The company continued its diversification program, dividing its activities between regional and major projects. In 1973 the company became involved in the projet de la Baie-James (the James Bay Project) a series of hydroelectric power stations on the La Grande River in northwestern Quebec that to this day is one of the largest hydroelectric projects in the world.
In 1974 the company merged with Construction et Pavage Moderne Ltée. (Modern Paving), and both companies began operation as Sintra Inc. with head offices in Montreal. Growth of the company continued and in 1974 they expanded outside of the province of Quebec with a major contract worth over $20 million for the construction of the 98 kilometer (60 mi) Route du Sud on the Caribbean island of Haiti.

In the years following Sintra Inc. continued its growth as a result of a series of highly successful projects and further company acquisitions and mergers.

Fast forward to the summer of 2012 and the company is involved in the reconstruction and expansion to four lanes of a portion of the Trans Canada Highway south of the Quebec city of Rivière-du-Loup and just north of the Province of New Brunswick border. Construction on this  7 kilometer section (4.5 mi) started in November of 2011 and will finish in November 2013. At the height of construction Sintra will have over 65 pieces of heavy-equipment on site including over a dozen Volvo A35F and A40F articulated haulers, motor graders, excavators and wheel loaders.

Project Manager, Maxime Carrier, noted that this job involves cutting through very rolling countryside, several stream crossings a number of rock cuts and moving over 1.6 million cubic meters  (2.09 million cu. yds.) of rock and soil, most of which will be in and out of one of the Volvo haulers. Additionally this project was particularly challenging as this section of the Trans Canada Highway is the main road conduit between the maritime provinces of New Brunswick, Nova Scotia and Prince Edward Island and the rest of Canada. Thousands of transport trucks and vehicles pass through here on a daily basis, so Carrier and his team were charged with building the new road and keeping the wheels of commerce rolling.


Working On A Reputation

On any construction project one of the nastiest phrases that can be heard is ‘equipment downtime’. It costs in loss of productivity, lost man hours and expensive repairs, all of which filters down to the job’s bottom line. Sintra’s superintendent Carl Ouellet is charged with making sure that everything is being completed as planned and also with making sure that the job is on budget. “I am very pleased with both Volvo and Strongco,” stated Ouellet. There have been some minor problems with some of the newer machines but both Volvo and Strongco have been there for us. When we call them, they arrive promptly and stay until the repairs are completed. That is the kind of service that we need to keep this job on time and on budget.” 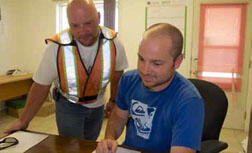 One of the advantages that Volvo Construction Equipment has over much its competition is that it still has roots deep in its native Sweden. Now Sweden is located well north of the Equator and well north of the Tropic of Cancer. As a matter of fact there is a portion of Sweden that is located above the Arctic Circle. What does that really matter you may ask? Well many pieces of construction equipment are designed and manufactured to operate where the temperatures are closer to plus 40 Celsius than to minus 40 Celsius. 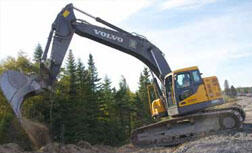 To Michel Nault, Sintra Inc. Directeur de la Gestion Matériel (Manager of Equipment Acquisition) this is extremely important. “Our machines have to work in some very extreme weather conditions here in Canada. The fact that an excavator is designed to start at minus 40 is important to our operations.” He went further, “Also to have the support of the manufacturer’s engineers who actually leave the office and spend time with our operators finding out what works and what doesn’t rather than designing and building something that looks pretty but doesn’t get the job done... is important as well. Volvo has done that for us in the past and continues to do it. They are alway there when we need them.”

When asked, “Why Volvo”. Nault was emphatic. “There is lots of good equipment available, but support by the dealer is very important. That is what Roger Caristo and his team at Strongco do for us. That is another reason we have come back to Volvo.”