Ecoland Inc. is a specialist in creating natural landscapes in urban settings. They create green spaces for wildlife and beautiful landscapes within Ontario’s sprawling neighborhoods.

“I love working outdoors and meeting new challenges,” says company President Ismet Mirena. “When we begin a project, there is no green; and when we complete the project, it’s amazing to see the changes in a short amount of time. We take pride in our work.”

A recent example includes the company’s work on the Mount Pleasant 51-2 Natural Heritage System (NHS) — a plan to create a “green coast.” The extent for this one-of-a-kind project was approximately 90 acres (36 ha), consisting of five channels. Each channel was designed by a collaborative team of landscape architects, ecologists, civil engineers, fluvial geomorphologists and botanists with the intention of protecting, enhancing and restoring the diversity and connectivity of natural areas and existing features such as woodlands and wetlands. Each channel corridor was created to connect fragmented natural features from lands cultivated and cropped and to improve the existing drainage system.

The development of a connected system creates a variety of ecological conditions including forested, shrub and grassland channels and swamp thickets, which attract different species. The newly created channels have been developed to promote aquatic habitat for different fish species and consideration of specialized habitat needs for various animals and fish. Channel features such as pools, riffles, hummocky topography and root-wads were designed and developed by the team to create attractive habitats, particularly for a fish species called Redside Dace — an animal on Ontario’s list of endangered species. The plan aims to restore their habitats and increase their population.

Each of these features creates small nooks, spaces and habitats for animals such as frogs, toads and salamanders to hide and bask in. In addition to creating natural features, the NHS consists of a series of trails, bridges and signage which will be utilized by the residents of the surrounding neighborhoods. 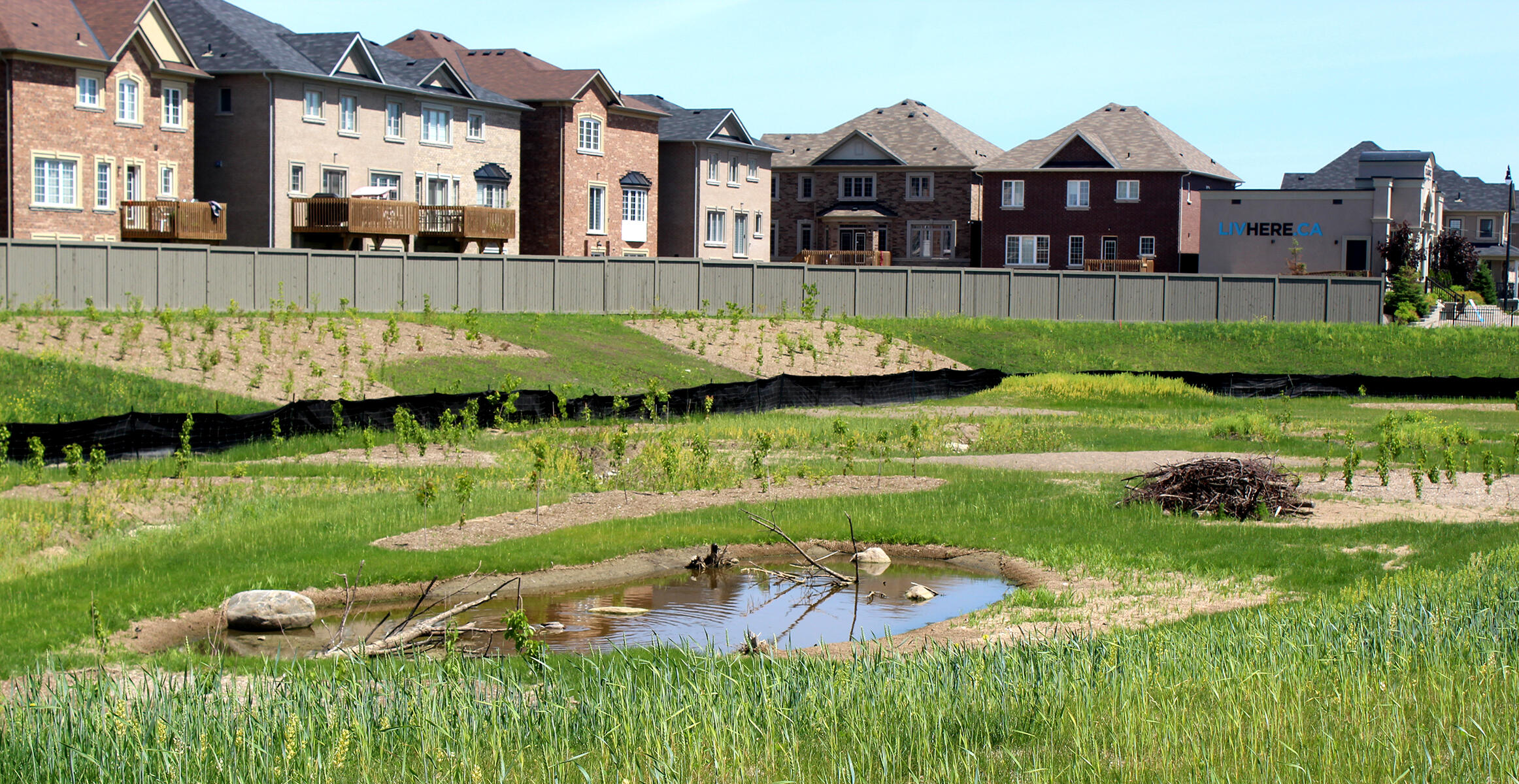 Ecoland Inc. was created three years ago when Mirena partnered with Dwyht Cuff, Xeni Islami and Bekim Zuzaku — all with 25 years of combined experience.

“I never thought I’d be doing what I’m doing today,” says Mirena, “but I saw an opportunity and decided to go for it.”

At first, Ecoland only used smaller equipment designed for landscaping. But as the business grew and the projects became larger, Mirena knew he needed bigger equipment. An old business connection from Volvo, Agako Nouch, introduced him to Daniel Hili at Strongco, a respected equipment dealership with locations throughout Canada, to discuss getting his first piece of Volvo equipment — an EC160E excavator.

“He had the background to know exactly what he wanted in terms of production capability,” says Hili. “We worked with him to match the right size machine and range of attachments to meet his exact needs for upcoming projects.”

Strongco made sure the excavator met all of Ecoland’s specifications and came with a hydraulic thumb, hydraulic pin-style coupler, and two different types of buckets so Ecoland’s crew would be able to pick up objects and carve out correct specifications.

“We built that machine exactly how he wanted,” says Hili. “The financing structure was just as important as the machine. At that time, Ecoland was still a startup company and needed a financing solution that made sense for their forecasted work and available capital.”

Hili and the team at Strongco worked with Volvo Financial Services (VFS) to find a formula that would work for Mirena and his partners. The result was a unique payment plan that involved Ecoland paying a larger amount in his first series of payments to compensate for a lower down payment.

“We were able to cater financing,” says Hili. “Then when Ecoland’s business grew and finances stabilized, that was less of a focus.”

Hili says the new focus is on making sure Ecoland has the right equipment to continue expanding.

“It’s about the relationship,” says Hili. “You listen to your customer, digest that information and provide them with a proposal. As his business grows and changes, then we help support those changes and that growth.”

To that point, the EC160E was in fact just the beginning. Ecoland kept growing, securing bigger projects, and needing larger and more versatile equipment. They purchased an EC220E excavator not long after the EC160E, and from there, it was a domino effect — eventually leading to the addition of two Volvo A25G articulated trucks and their most recent purchases: a Volvo EC350E excavator, an L60H front end loader, and an SD75B soil compactor.

“The Volvo EC350E was added as our projects got bigger and we needed to excavate a large quantity of soil and fill. It’s been a vital addition to the fleet, particularly for the recent MP 51-2 NHS project,” says Mirena.

Hili adds, “The EC350E fed the two trucks with soil and the EC160E was equipped with a swivel bucket for cutting the low of the channel.” 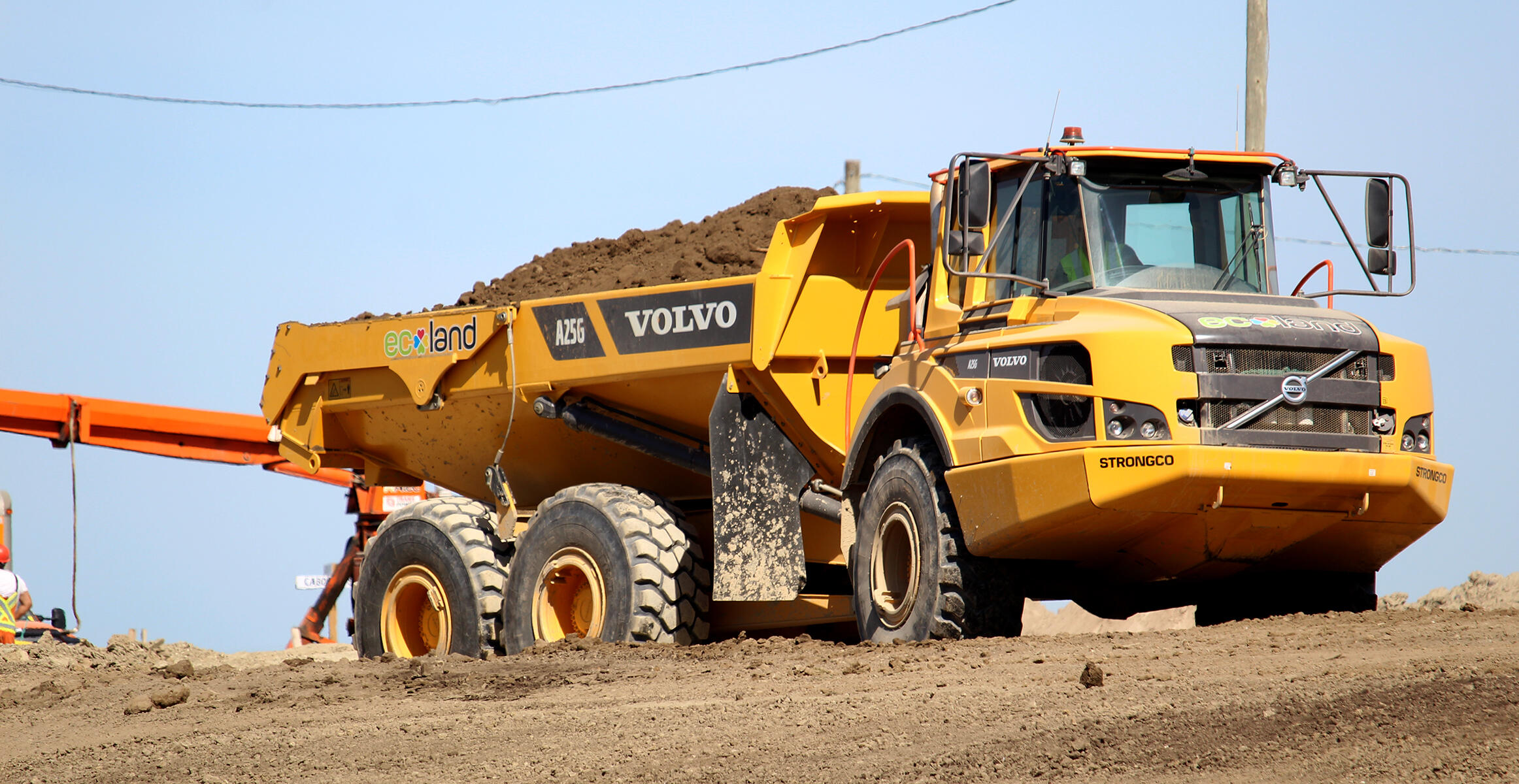 On the MP 51-2 NHS project outside Toronto, the company is using the EC350E excavator, an EC160E excavator and two A25G articulated haulers.

“The 350 excavator is a very powerful machine,” says Mark Arseneau, superintendent, Ecoland. “There’s a feature on the machine that allows you to set the throttle down to F, diverting all the hydraulic power to one pump, which gives it massive digging power. This has been quite useful when dealing with the hard dirt that we come across quite often.”

Setting the throttle is in reference to the different work modes available on the EC350E excavator. Volvo offers a unique, integrated work mode system that includes four different modes — I, F, G and H — designed to let the operator choose the best mode for the task at hand.

Ecoland is also taking advantage of Volvo CareTrack, a telematics system that gives owners information on their machines including machine utilization, location, fuel consumption and more.

“It’s helped us track fuel consumption and idle times, which is really important,” says Adem Kosumi, operator at Ecoland. “It helps us with both bidding on projects and making sure we have the right machines on the job.”

The information has also helped Ecoland identify areas in which equipment operators could make changes to improve performance and reduce wear and tear.

“For example, our employees weren’t using the engine brake, which helps slow the machine when going down steep slopes when fully loaded,” says Arseneau. “So, we had a meeting and directed our operators to use them, which not only saves on brake pads, service costs and downtime, but improves safety as well.”

“It’s a really good tool to use,” says Mirena. “It’s helped us in a lot of different ways, and it’s something we definitely plan to incorporate on our future Volvo purchases.”

To date, Ecoland has completed the Mount Pleasant 51-2 NHS project — flipping an existing water course to newly created one — with great success, including approvals from the Ontario Ministry of Natural Resources and the Credit Valley Conservation. The channels continue to establish themselves and are ready to service new habitat and thrive for many years to come.

Ecoland expects to continue working on more phases similar to the Mount Pleasant 51-2 NHS project while also increasing their workforce from 30 to 50 people.

“As we continue to grow, we expect to rely heavily on Strongco’s expertise to help build our fleet, as well as use the data and insights we’re getting from CareTrack,” says Mirena.

Equally as important as company growth is the feeling of making a difference in his community’s landscape. To Mirena, that was the driving force behind starting Ecoland.

“We’re improving quality of life,” he says. “We’re rebuilding the environment — promoting clean air and erosion prevention. We’re giving habitat to protected species, and we’re beautifying the community. It’s an honor to do what we’re doing.”