St. Paul, Minnesota rose from the steep bluffs where the Mississippi and Minnesota rivers collide. It was a frontier trading post before German, Irish and Scandinavian settlers transformed the city into an industrial hub. New enterprises were forged, like the West Publishing Company, which today remains the nation’s largest producer of law and academic books.

St. Paul is also steeped in a gritty past. “If you were looking for a guy you hadn’t seen for a few months, you usually thought of two places: prison or St. Paul,” said gangster Al Karpis. The natural caves tunneling under the city from the bluffs were notorious hideouts for Baby Face Nelson and Machine Gun Kelly. The geography of the bluffs likewise benefitted West Publishing to use as underground storage for lead printing plates.

The buildings had shackled St. Paul for decades. It dropped from tax rolls in 1992 after West Publishing moved to the suburbs; the governmental tenants exited in 2011. The city strained for urban housing, but no commercial buyer wanted to adopt the risks of the structural behemoth. Instead, council voted to raze the complex and market the site, and recoup costs from future income from development, projected at $150 million.

Rachel Contracting, based in St. Michael, Minnesota, was awarded the $15 million, 852,000 square foot demolition contract in mid-2015. The site’s location and history owed to it being one of the most challenging demolition projects for Rachel Contracting.

“The first step was to abate all hazardous materials, including asbestos,” says Nick Bartemio, Project Manager for Rachel. “The age of the buildings and different generations of construction soon revealed more asbestos than was initially projected by the pre-engineering studies,” he adds.

Before any exterior demolition could begin, bluff stabilization was required to shore up the back wall facing Kellogg Boulevard.

Rachel completed this by drilling 18,000 linear feet of grouted rockbolt anchors into the face of the bluff. After demolition is completed, Rachel will build an 18-24 inch-thick retaining wall using 25,000 ft2 of cast-in-place concrete along Kellogg Boulevard.

Mark Kraemer is Vice President of Field Operations for Rachel. He says, “This site sits between a main downtown artery and is 30 feet from an active rail line on the river-facing side. We knew going in to bid that we could not bring it down by explosives, so the only option was to use a high reach demolition excavator.”

Mark adds, “We looked at competing brands and after comparing apples to apples, we felt more comfortable going with the Volvo due to the reach, weight and value we receive for the dollars we spend. The support from local dealer Nuss Truck & Equipment was a big factor in our decision. We had a short lead time and Nuss was able to provide the machine very quickly and were on site for set-up and training our operators.”

Conversion chameleon
The EC700CHR was chosen for its reach and weight capacities, says Jim Soderbeck, Field Sales Manager with Nuss. It has a maximum pin height of 105 feet with boom extension and is fitted with a Genesis GDT Razer 7,000-pound shear. The matched powertrain and hydraulics supply ample power for the shear to fracture concrete and snip rebar and at height and safely lower to the ground.

“The high reach allows us to bring this job down in a much more controlled fashion. On a building like this with thick concrete columns wrapped around steel I-beams we can cut through them with the shear on the high reach boom without jeopardizing the safety of the building and pedestrian and vehicular traffic,” says Randy Shultz, General Demolition Superintendent, Rachel Contracting.

Concrete columns and slabs range in size from 1.5 ft2 to 10-inch slabs reinforced with #4 rebar, and 12-inch concrete slabs that were supporting a parking garage.

The high reach’s added value is its ability to efficiently convert to a standard excavator. The Volvo-patented modular joint design, located in front of the boom cylinders, has a self-aligning, hydraulic push pull pin system that makes the boom switch-out swift and simple. This means one less machine on site and keeps the EC700 from sitting idle.

The high reach boom is converted to a standard boom every two-three days, paired with a Genesis DemoPro 900 for concrete cleanup. Says Mark, “The conversion from a high reach to standard is one of the big benefits we saw with Volvo is being able to put a 12,000 pound attachment and use at 60-65 feet. That height level is our bread and butter here in the Midwest,” says Mark, “We have it down to less than an hour with two people. Volvo did an excellent job making this machine come apart and go together easy.”

Rachel also uses a Genesis GDR 300 demolition recycler and LXP® 300 Logix Processor fitted on three 80,000-pound excavators for sorting and processing. Over 85% of the complex is being recycled and left on site. All concrete is crushed for base or backfill. The steel, and ferrous and non-ferrous metals are recycled and the remainder sent to the landfill. 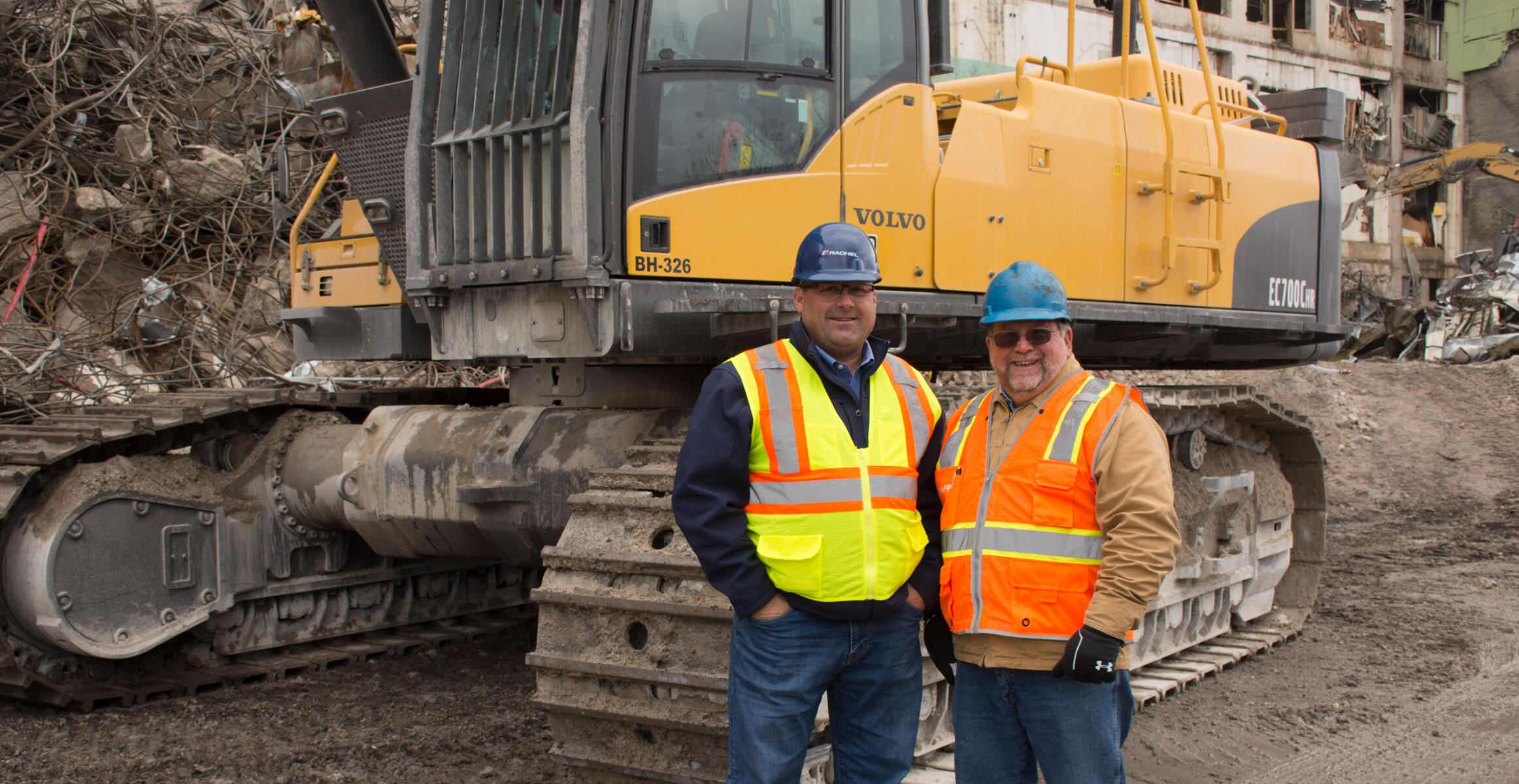 Starting from zero
Don Rachel can confidently tackle the difficult stretch projects because of two things: the right employees and right equipment. “This is a very large job in our market and intrigued us for a lot of different reasons, including the history and the challenge of the bluffs. The demo portion is typical for us but the anchor tie-ins under the city and retaining wall were unusual.” Unusual, but not out of scope, as Rachel has an entire division devoted to earthwork, soil remediation and stabilization.

Rachel Contracting pooled four lifetimes of construction experience between Don and partners Jerry Rachel, Mark Kraemer and Matt Coz. “We started the company in 2006, focused on specialty contracting and demolition. We went from zero to $100 million in projects last year and have over 220 employees,” he said.

Most jobs are concentrated in the upper Midwest. Recent demolition projects include the 1 million ft2 3M plant in Beacon Bluff and the 1.2 million ft2 Brookdale Mall in Brooklyn Center, Minnesota.

Rachel’s work has earned them a spot in ENR’s Top 600 Specialty Contractors for the past five years. They are also active in the Association of General Contractors (AGC) and National Demolition Association, with Don serving as past presidents of the NDA and the Minnesota chapter of AGC. Rachel also donated significantly to their local community schools and churches. “We have been gifted a lot and we owe it back,” Don says.

In 2016, Don Rachel was named the Upper Midwest Region Ernst &Young Entrepreneur of the Year, and advanced to the national competition. The award recognizes entrepreneurs who demonstrate excellence and extraordinary success in such areas as innovation, financial performance and personal commitment to their businesses and communities.

“In the national competition, we lost to J.W. Marriott,” says Don, musing on the two company comparisons, “but I am okay with that.”