Increased inflow of materials is driving growth at Region of Waterloo, one of Canada’s pioneers of modern transfer and recycling.

Located in southwestern Ontario, the Region of Waterloo encompasses three cities and around 530,000 residents. Set in the middle of the triangle formed by Lakes Huron, Erie and Ontario, it’s a greenbelt community that features a mixture of farms, educational facilities and technological innovation.

It is also known for its advanced approach to recycling, which began in the early 1980s and has continued through to today. The region has led the way with a variety of recycling programs and operations. This currently includes a pair of busy transfer stations where thousands of tons of recyclable materials are collected each year.

The high volume of material moving through Waterloo’s system requires good relationships with suppliers and sales partners, and efficient staff and equipment that can meet the demands of managing incoming materials, whether the product being moved is paper, plastics or organics.

Waterloo, which includes the cities of Kitchener, Cambridge and Waterloo, Ontario, was one of the first communities to adopt what could be considered modern recycling programs, more than 35 years ago, according to operations supervisor Mike Ursu.

“In 1981, the concept of curbside pickup of recycling in a separate box was born here in Kitchener and spread through North America from there,” Ursu says.

Today, the region has a multi-faceted approach to its recycling programs, using multiple sites for collecting material, and then redirecting streams to their proper locations. While it does maintain an active landfill, Waterloo promotes recycling through its central collection facility and another, smaller transfer station.

“We have a recycling center where trucks drop off the recycling that they pick up at the curb,” Ursu explains.

He adds that Waterloo’s recycling center takes everything collected curb-side in the region, moving approximate-ly 38,000 tons of “blue box” materials through their site yearly, which is not a small task.

“Our transfer facility receives the common blue box materials, like household bottles, jars and cans, plastic, and metal and aluminum,” Ursu continues. “And then, on the paper side, boxboard, cardboard and newsprint. The container portion, we process right at the facility, and the mixed-paper portion we transfer to a different facility that we don’t own and it gets sorted there.”

Beyond blue box materials, Ursu says the region’s food waste collection program has also been expanding in recent years. This has generated plenty of additional material to be processed by Waterloo – around 22,000 tons annually, and growing, after the region changed its garbage collection schedule to a bi-weekly pickup in 2017.

“We process about 22,000 tons of food waste annually,” says Ursu. “We went to bi-weekly garbage last March and it has more than doubled our food waste.” He adds that food waste is now transferred at their curbside drop-off building and transferred to an organics waste processor on a regular basis. 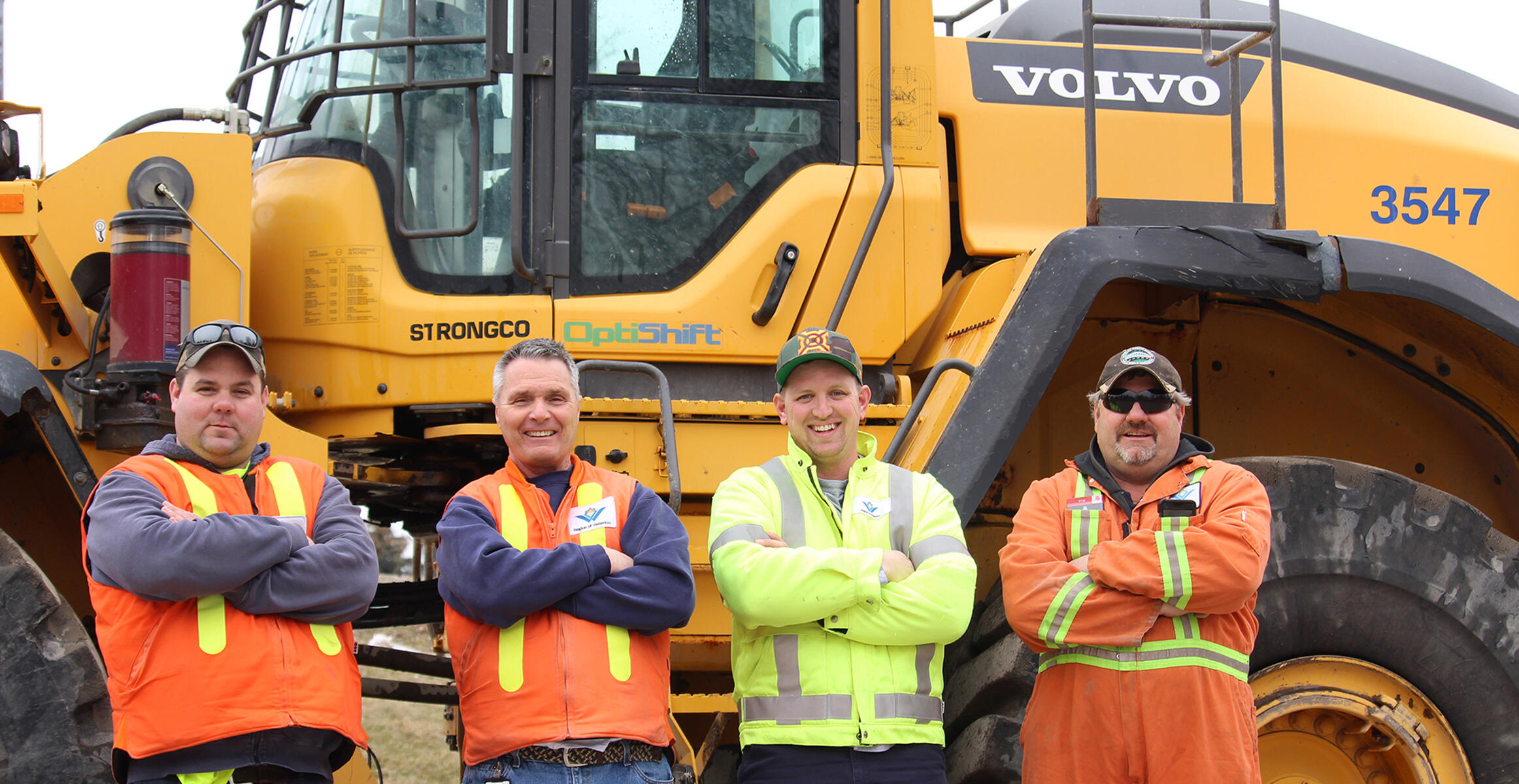 WHEEL LOADERS KEY TO EFFICIENCY AND SAFETY FOR WATERLOO

With more than 50,000 tons of total material transferred and processed through its facilities annually, and more coming all the time, Waterloo has had to find a solid partner to work with when it comes to the equipment that moves all that material. The region has had a long relationship with Volvo Construction Equipment for wheel loaders – a relationship that was strengthened recently by Volvo signing a sole supplier agreement with local dealer Strongco.

Ben Waldron, Strongco territory manager, says the growth in Waterloo’s recycling has resulted in a need for more machines, and the region’s requirements for features in those machines is changing as well.

“They’re currently growing their operations,” he says. “They have need of two more 15-ton loaders because of the increase in recycling.

“With the decree that they would only pick up waste every two weeks, but they’ll pick up recycling and compost weekly, they’ve seen a gigantic growth – to the point where they’re going to buy two new loaders to handle incoming material.”

Waterloo’s Volvo machines are used in a variety of roles within their transfer stations. Key jobs include moving paper products and food waste into highway trailers for shipping to regional recyclers.

According to Ursu, when you’re dealing with a product like paper, it can wind up everywhere if you’re not careful. To prevent this, he says the Volvo loaders’ auto leveling feature comes in very handy.

“We’re not in a quarry or a gravel pit, but with food waste and paper, travelling a distance with both of them, we need that self-leveling feature, not only when driving but also as we’re lifting the bucket,” Ursu ex-plains. “Our shipping bay is somewhat below ground-level, so the top of the trailer is maybe six or seven feet above the floor level that the loader is working on. So we have some sight into the inside of the trailer, and are working at a good height.”

Waldron adds that the ability to level any load makes Waterloo’s equipment safer for all its employees.

“They rotate their guys through all the equipment and different jobs,” he says. “Any guy can get into any loader, and if for whatever reason he needs to pick up a set of forks and lift a load, he can do that safely.”

“We have outdoor bunkers,” Ursu explains. “The curbside trucks drop off just in front of the bunker, and then the loader scoops it up and deposits it inside the building. When a truck shows up to take materials away to a processing location, we use our loaders to fill the truck. That’s at floor level, so there’s no pits or any loading bay, but the Volvo is able to reach up and load the truck.”

Unlike with paper, for food waste, Waterloo’s loaders are not used to tamp it down, because of the weight of the material. He says that’s where another of their new loaders’ benefits comes in – Volvo’s Load Assist system.

“They wanted a better, more efficient scale to use on their machines,” Waldron says. “Volvo’s new Load Assist scale is on an Android tablet, and they can use that to track every load they do – even if they have to stop and do something else, they can store up to 20 different jobs in that tablet, and come back to it after the fact.” Outside, the wheel loaders are also used to turn the region’s compost windrows, Ursu notes. The operators can take advantage of Volvo’s “Reverse by Braking” feature in that application and others.

“When the operator backs up, he slaps it from reverse to forward, or forward to reverse, whatever he wants to do,” says Waldron. “The computer neutralizes the engine, brings the ma-chine to a safe stop, and sends it into the forward motion. They’re saving fuel, and coming to a complete and safe stop every time.”

Through the agreement with Strongco, the Region of Waterloo is in line to receive two machines in the near future, and a total of seven loaders over the period of the arrangement.

According to Waldron, their Volvo wheel loaders will serve the transfer station operations well going forward, as the region’s efforts continue to successfully encourage residents to recycle more materials across the board, and increasing amounts of paper, containers, mixed waste and organics just keep flowing in.