A raceway park is set to re-open in Kershaw, S.C., that promises to give people of all ages the opportunity to get behind the wheel to enjoy the speed and action that comes from driving on a road course.

When the revamped Carolina Motorsports Park is fully operational in August, it will allow amateur car and motorcycle racers to try their hand on a 2.27-mi. road course.

In preparation for day one, the park's new owner, Michael Cummings immediately initiated plans to significantly upgrade the facility — none more important than a much-needed and precisely-done milling and paving project.

"We're repaving it because the track is 20 years old and the surface is worn, which causes degradation to the soft racecar tires and wears them out," said Cummings, who purchased the park on June 10. "Carolina Motorsports Park will accommodate a wide variety of cars, from sports cars to race cars, as well as motorcycles. We will do a lot of first responder training, too — pretty much everything with two or four wheels."

To make sure the new road surface was smooth and even, Cummings brought in Lynches River Contracting Inc., a veteran Pageland, S.C., company that specializes in asphalt work across the two Carolinas. Much of the contractor's work also is with the transportation departments in each state.

Advanced Materials Services LLC (AMS), in Auburn, Ala., an engineering consulting firm, collaborated with Lynches River to develop the specifications and rehabilitation plan for the new Carolina Motorsports Park. The company's principal engineer on site was Brian D. Prowell, Ph.D, P.E. Along with Tommy James, P.E., also from AMS, Prowell worked in echelon to ensure project specifications were achieved.

All team members agree that milling and paving a road course speedway demands a higher precision and techniques not generally used on roads and interstates.

"You really need everything to be perfect on a racetrack — the precise smoothness, the correct mix, a high- level of in-place density, the binder needs to be right, the joints have to be well made — all those things are important to get the track exactly the way Michael [Cummings] wants it," Prowell said.

For their part, the first thing Preslar and Sanders did upon signing the contract to do the asphalt work was to visit the racetrack, along with a group of other paving professionals within the company.

"Our team of people meet every Wednesday and we discuss our jobs, but within the last month or 45 days our primary focus was on the racetrack," Sanders said prior to the start of milling and paving on June 22. "The plan was not something that we came up with overnight — there was a great deal of forethought and study of the site by a lot of people to decide the best way to do the job. This planning also included a great deal of effort from Boggs Materials Inc., which designed and produced the asphalt; Boggs Transport Inc., which transported the asphalt to the track without any hitches, which was challenging; and Boggs Contracting Inc. provided survey and ride smoothness testing."

Sanders added, before the work began, that "The paving itself shouldn't take us more than four days. We have allotted three days, but we have several crossovers we must do, which I think will run over to an extra day."

His prediction was accurate as LRC completed the paving portion of the project in less than a full workweek of starting the project. 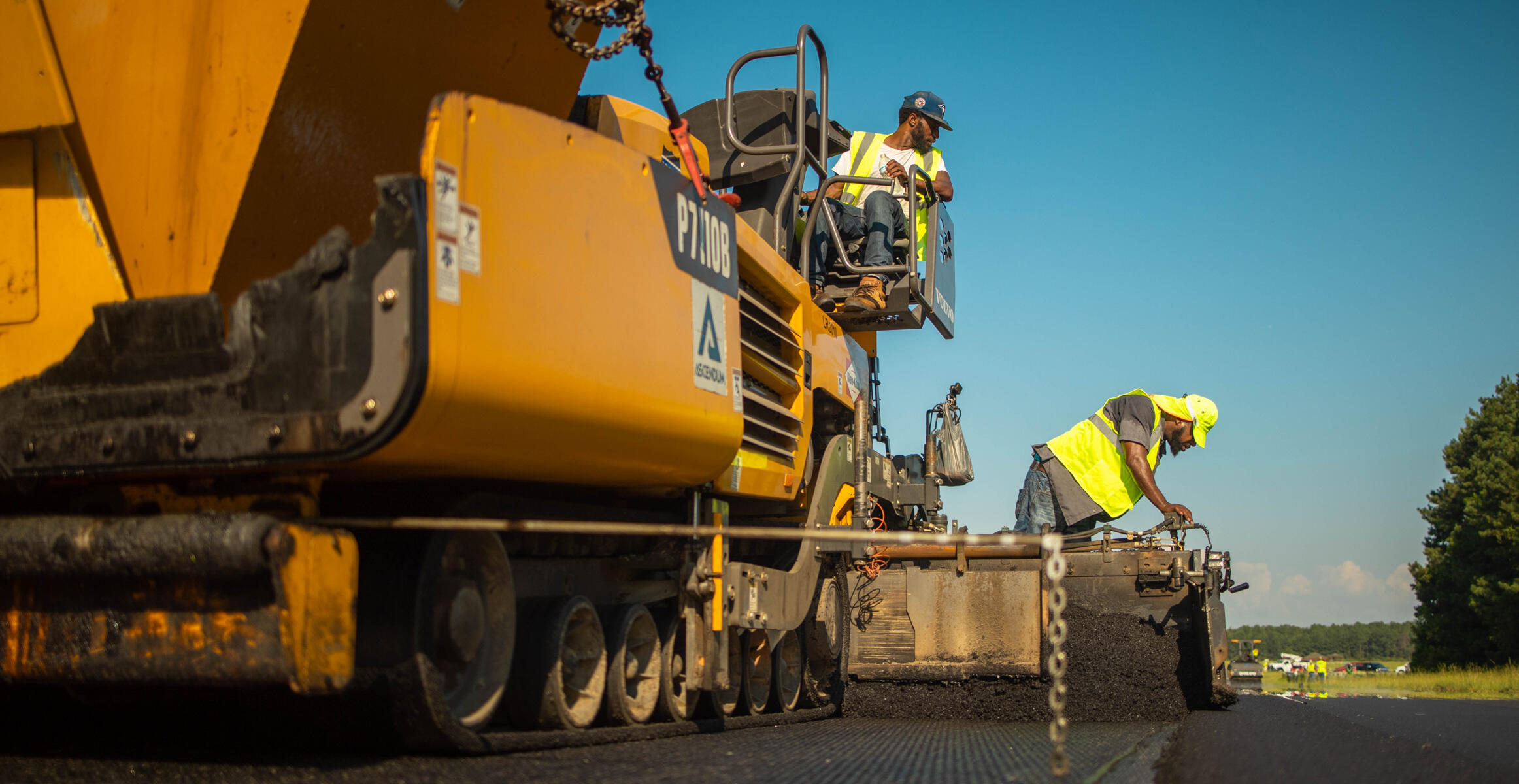 The liquid asphalt binder, supplied by Associated Asphalt Partners LLC, used in the asphalt mix on the racetrack is more viscous-stiff and stickier than what the LRC pavers normally apply to roads and highways across the Carolinas. But more than one LRC crew member admitted they enjoyed the challenge of putting down a new asphalt racetrack surface, even if it meant working with a stiffer, tougher mix.

"I like this project because it's different than what we are used to, and it pushes us to our limit," George Hawver, an LRC foreman, said shortly before paving commenced. "Now, we haven't been pushed to the limit, yet. The milling was the same, but the mix is what will really be different for us because we are not used to this liquid and paving this specific way. The DOT and airport work we do is not done the same way, and this is the first time I have worked on a racetrack."

His colleague, Dennis Craig, the contracting company's paving superintendent, added, "I have been here for the milling and patching and now for the track's resurfacing. In the milling, we took off one inch of the track and we will be replacing it with 1½ inches of asphalt. We had a few challenges in that the patching had to be to a certain tolerance; that's a little different than what we do out on a highway.

The input from AMS helped the contractor develop the precision paving needed for a road course with 14 turns.

"The stresses and the requirements for a racetrack are different than for almost every other pavement and you really need to take that into consideration when you are planning the paving and doing the engineering specifications," said Prowell.

He said LRC would be paving in echelon, which would eliminate the longitudinal joints and, as the track is 36 ft. wide, paving in two passes at 18 ft. wide. Getting uniformity across that 18-ft. pass is a feat that requires good equipment like the Volvo machines used by Lynches River.

In addition, by using transfer vehicles to feed the Volvo pavers, Lynches River would not have any segregation of either the temperature or of the aggregate of the mix being fed into the paver to ensure the best possible mat.

Sanders added that his team of Volvo rollers "will then come up to make sure we get good compaction and seal up that middle seam so good it will all look like it was poured out of a bucket."

Other elements critical to a finely paved racecourse, Prowell said, include a uniform surface texture as that affects the friction that drivers will feel. Smoothness also is key, as well as the in-place density.

"The high shear forces from the sticky racecar tires can pull stones out of the asphalt if you don't have the proper density and the right binder thickness," he added. "So, we are trying to make sure all those things are in place on the track."

Lynches River's business depends upon the reliability and value it gets from its Volvo paving equipment, which it obtains from Ascendum Machinery in Charlotte. The full-service dealership, with locations across several states, is the exclusive North American distributor of Volvo construction machines.

According to Sanders, he has equipment from other manufacturers, too, but the Volvo paving machines and rollers are the preferred choice for Lynches River.

"We are using two Volvo 7110B pavers, the 10-20-foot-wide track machines; and the new 5110Bs, an eight-foot-wide paver, which came out last year," he said. "Volvo selected Lynches River to do a trial of their new 5170B rubber-tire version. They also gave me, out of the goodness of their hearts, a six-month free trial of the 5170 and then the following year, I put my order in for the 5110B, which is the tracked version. We do a lot of secondary road paving where roads vary from 18 to 20 feet so you can't always do secondary road paving with a 10-foot paver or you'll be paving in the grass." 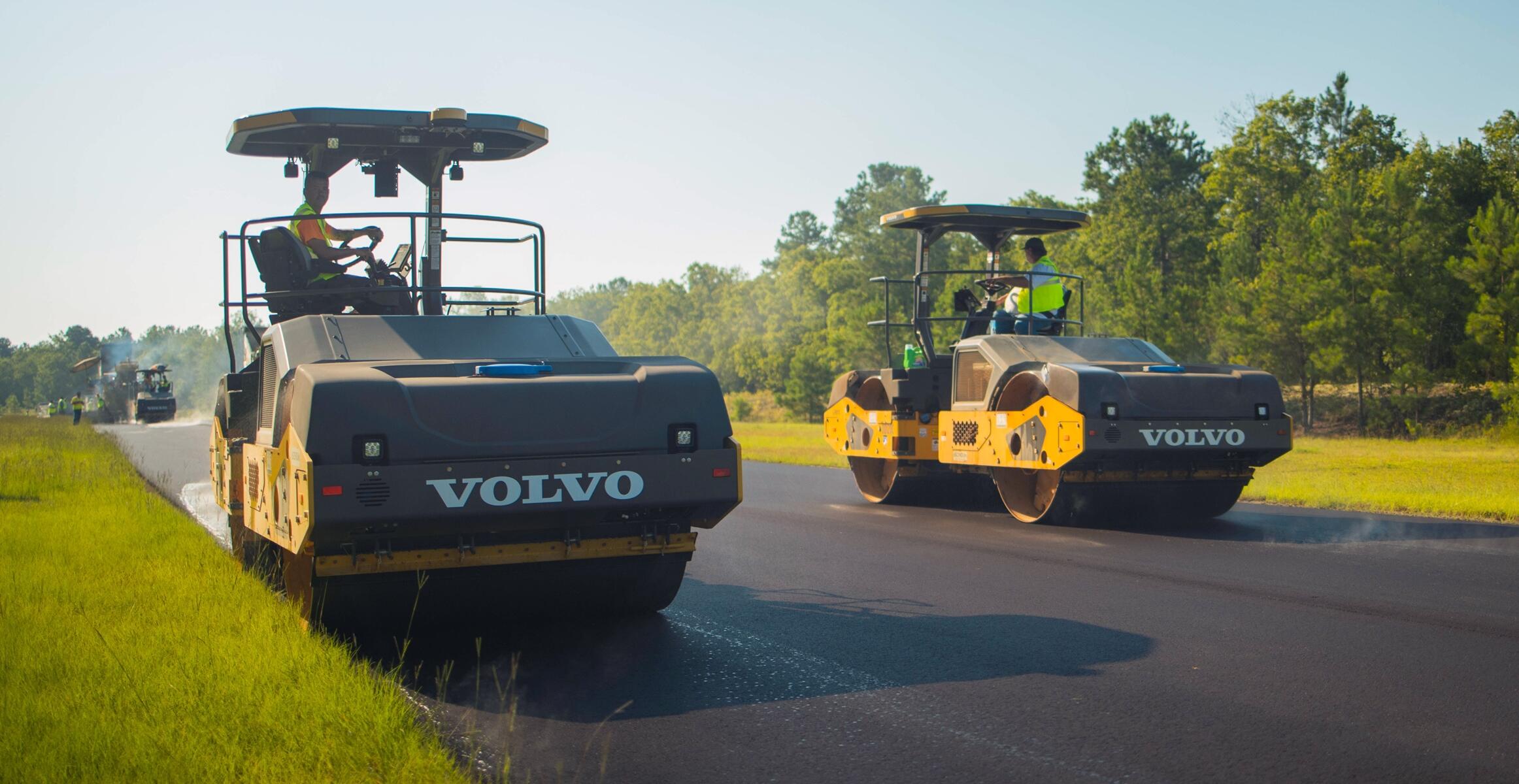 In addition, Lynches River brought to the Carolina Motorsports Park project DD120 and DD110 rollers, noted for their advanced Intelligent Compaction systems that give an operator real time measurements of the asphalt temperature, the number of passes and monitor of the density of the mat itself.

"I've been most impressed with the Volvo machines we have because their technology and designs are great," Sanders said. "Not only that, but the parts, service and support we have gotten from Ascendum has been vital to our business. If you don't have good support and you're not able to get parts when you need them, you're left with downtime, and keeping your equipment on uptime means everything in the construction business.

"I want to thank Ascendum's Kristin Parker, Mark Arcilesi and Terry Thompson for loaning us the Volvo rollers and a new 7110B paver to use in case LRC's went down while getting this racetrack job done," he continued. "It's been a team effort from AMS, Ascendum, Villager Construction, Michael Cummings and David Watkins from Carolina Motor Sports Park, and Volvo's Gary Atkinson and Ray Burn. We have received a lot of support from the Volvo Group and we do appreciate it." 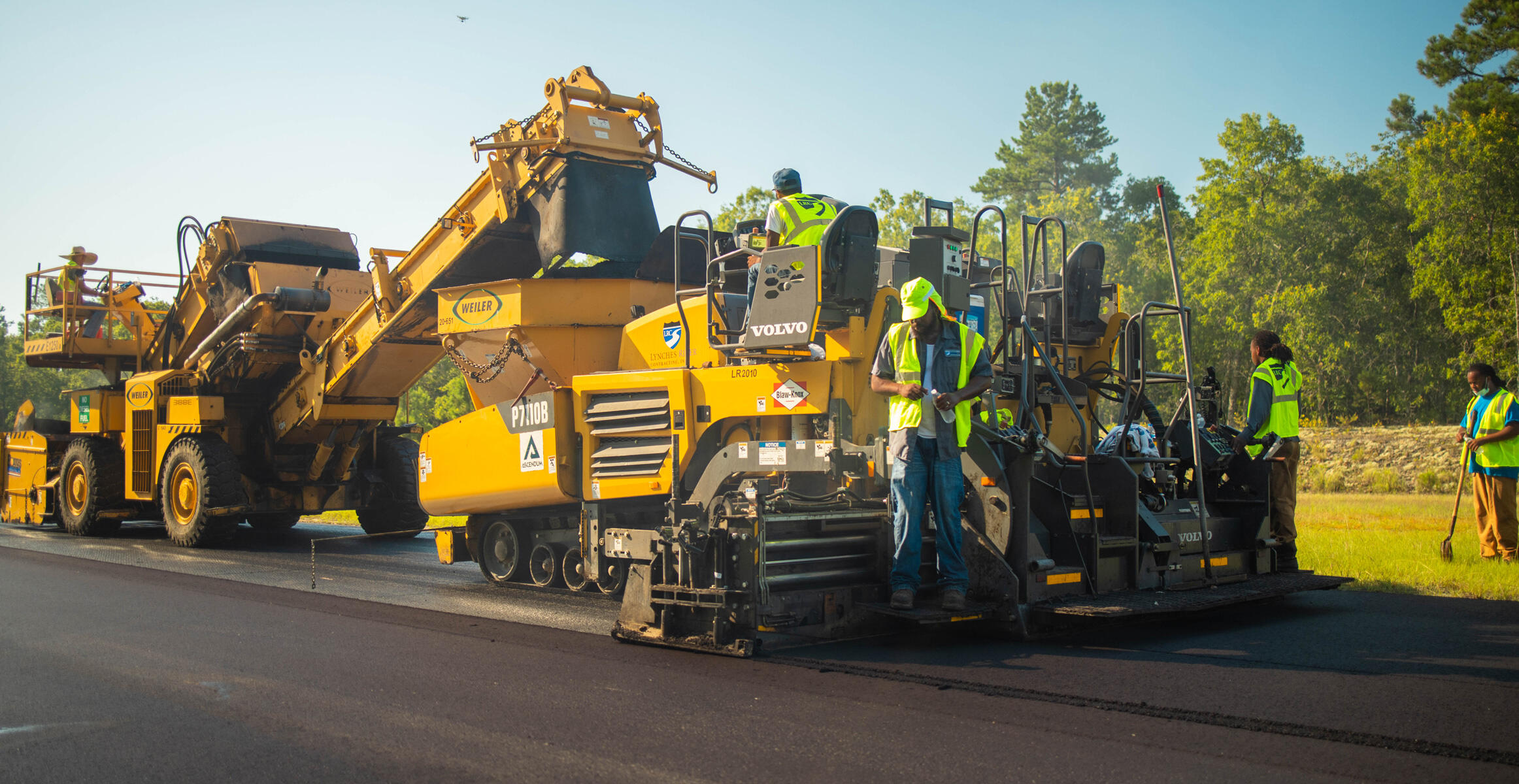 Lynches River Contracting was founded by Preslar and Sanders in 2014 after they each gained decades of experience in the asphalt paving business. Each man had previously worked at Boggs Paving in Monroe, N.C. (which became Boggs Contracting in 2019) before partnering up on the new firm.

"We have grown from 75 employees to start with and now we are up to 150," Sanders said. "We were able to grow like that through training. It's hard to find people to do this kind of work so you must locate men and women who have got the will and the want to excel and be able to grow within the company. We have two or three young foremen out here that are in their mid-'20s. When you look at older people in the construction industry, like me, with experience and know-how, we're a dying breed.

"But I don't mind going out in the field to train. That's why we have been so successful. I started off as a flagger 35 years ago. When I worked at Boggs/Vaughn Contracting, I had a great teacher who put me through a brutal training, which consisted of, at a young age, running my own storm basin and concrete curb and gutter crew to looking after bridge jobs, as well as asphalt paving. So, I have worked in all aspects of construction, even utilities."

Regarding Lynches River's paving project at the Carolina Motorsports Park, company president Thad Preslar acknowledged the complexities and challenges of creating a racing surface as near to perfect as one can get.

"When we read the project specifications that we often get, we sometimes wonder why we bid on some projects, but then if you never challenge yourself to do something great, you will never do anything great," he said. "When we take on a job like this, it takes our men and women out of their comfort zone and challenges them, and everybody likes to be challenged, I think. If you talk to our people working on this project, they are all excited to be doing something special and I think every one of them would like to be able to drive their family on that raceway and say, ‘Hey, I had something to do with making that track!' It gives us something extraordinary to be a part of."

The stresses and requirements for a racetrack are different than for almost every other pavement. Watch how Lynches River Contracting delivered a perfect finish using Volvo pavers and compactors.