Over half of the municipal solid waste produced in the United States each year is diverted to landfills—over 135 million tons in 2014, according to the latest EPA report*.

Gone are the days of the ‘town dump.’ Today’s landfills are using greener methods to safely cover waste; generate energy from the underground methane gases; and give a second life as nature preserves, golf courses, and even amphitheaters.

The number of landfills in the U.S. has dropped from 7,600 in the early 1980s to less than 2000 in 2017 due to stricter land use regulations and a swell in recycling. Those that remain, however, are increasing in size.

Lycoming County Resource Management Services operates a 500-acre site in north central Pennsylvania than includes a landfill, material recovery facility and recycling center. The landfill comprises 100 acres of the property. When opened in 1978, the landfill averaged 16,689 tons of municipal solid waste (MSW) annually. In 2017, it receives 1,100 tons daily of MSW — the food scraps, product packaging, clothing, bottles, newspapers and other common household items that consumers do not recycle.

After waste, the second chief component of a landfill is dirt and shale, both of which are in abundance at the Lycoming County Landfill. Shale and crushed rock are used to build and maintain roadways to dumping areas and pad and cover the underground cells.

A landfill cell is a complex creature. Each cell is approximately 10-square acres. The bottom is lined with geotextile matting and three feet of protective stone. Next, several layers of clay are compacted over the rock, and then a plastic cell liner is spread over the open cell before any waste is added. To further prevent groundwater contamination, PVC piping is latticed across the cell to collect leachate, the rainwater runoff that seeps into the waste, and funneled to lagoons. Rock, soil and clay are used to cap and close the cell, then it is reseeded and returns to undisturbed grassland.

Says David Strayer, assistant operations manager, “It’s nice to be able to supply our own stone. That is not a resource most landfills have available. We have a very hard vein of blue shale at our pit and since we are in close proximity to (populated) areas we cannot blast. Instead, we use an excavator with hammer or single shank ripper to break it into slabs that we can run through our crusher and screen to the right size. We have a McCloskey C50 jaw crusher and a Screen Machine Spyder 516T and a Finlay 833 screen plants that allow us to produce stone from a powder, size 3/8” minus, up to 8 or 6 inch minus rock for roads.” 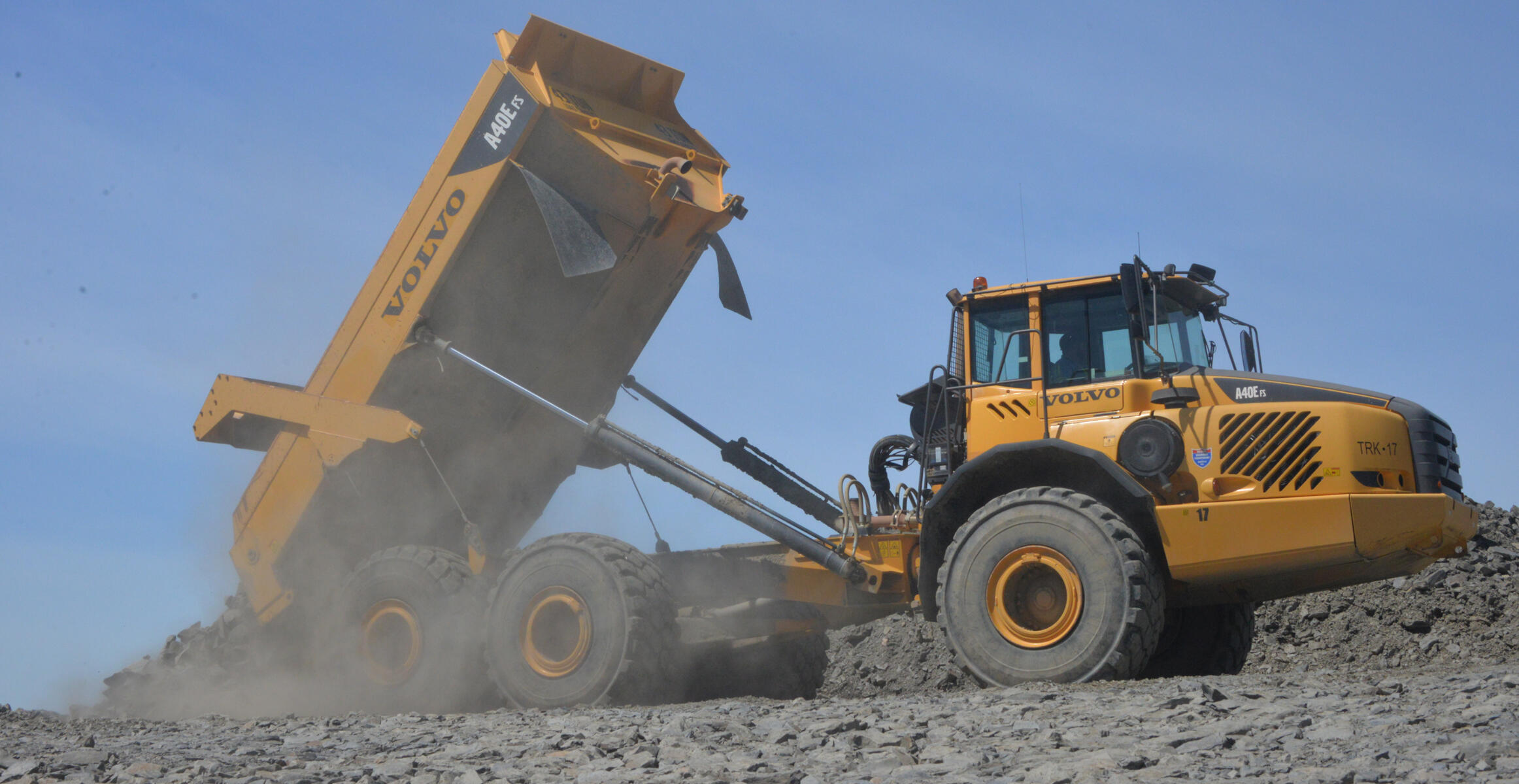 A 2017 Volvo L350F wheel loader is the landfill’s flagship machine to shuttle shale from the pit to the two on-site crushers or load its fleet of five Volvo articulated haulers. The 10-yd3 face loader is the largest in the Volvo line-up, powered by a 16-liter, 532 hp Volvo engine.

Says Dave, “That size of machine is crucial to us. At a landfill this large, you need to move material quickly and this size of loader paired with the Volvo 40-ton haul trucks allow us to do that with less wear and tear on the equipment, less waiting time to load and, and ultimately less stress on your operator.”

Says Jason, “We are obligated to follow certain buying regulations. If we go out to a straight bid, there’s a good chance that while we may save a few thousand dollars, in the long run it is not cheaper if the equipment does not give you the value, service and life you expect. We are particular. We want a loader that will last a long time with good fuel efficiency. That is why we used the COSTARS cooperative purchasing program to buy the L350. Through COSTARS we can select from a list of equipment with pre-negotiated pricing through a state contracting system.”

COSTARS, while specific to Pennsylvania, is one of numerous state and federal buying contracts that are becoming an attractive alternate to the traditional bid process for governmental customers.

“Most municipalities our dealership works with are using COSTARS, HGACBuy and NJPA (National Joint Powers Alliance®). It makes it much more efficient for equipment selection, and the taxpayers have the satisfaction of knowing their money is being used responsibly,” says Brian. 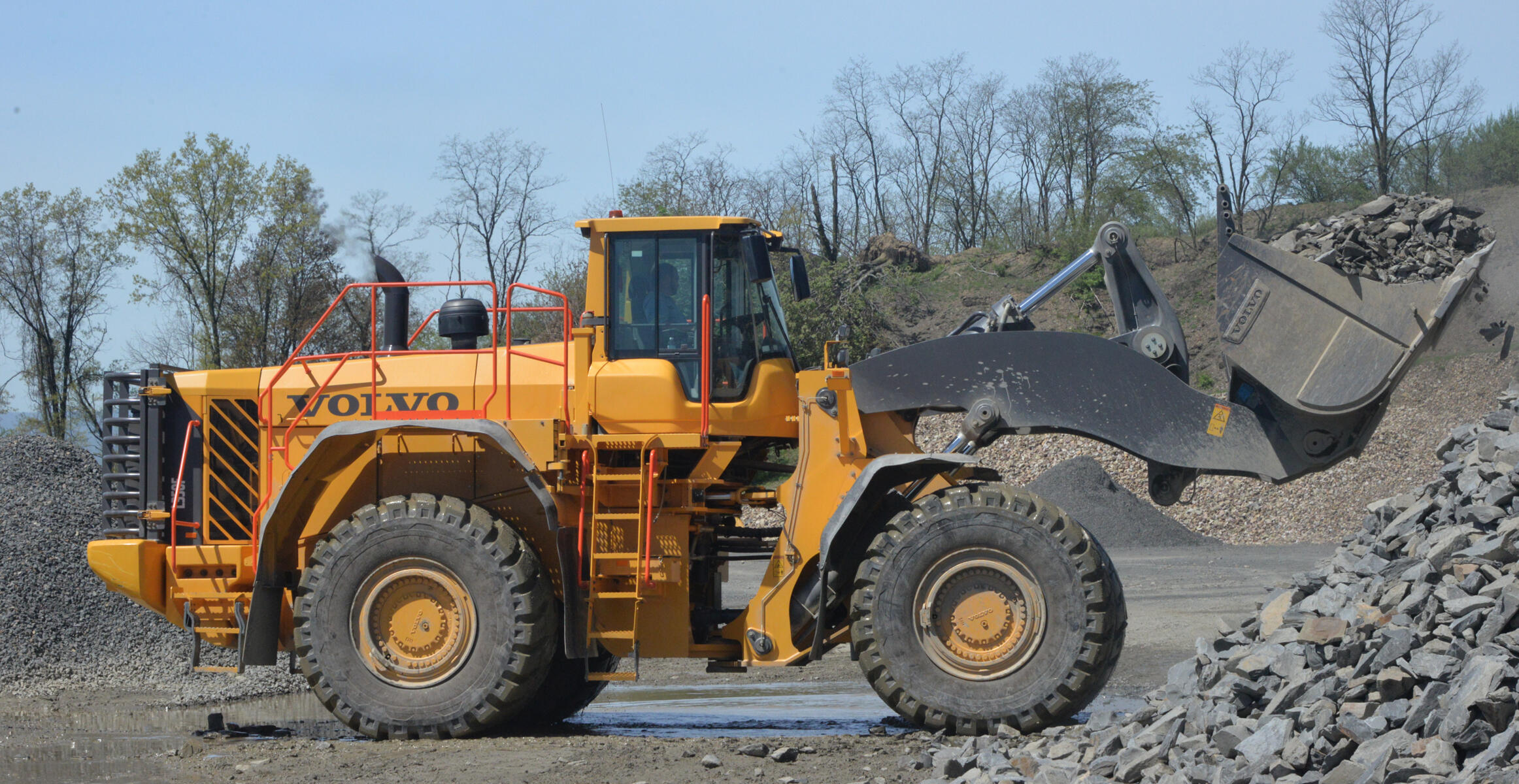 Tom Schanz, state/provincial government sales manager for Volvo says municipal customers should consider the benefits of state buying contracts. “COSTARS is the Commonwealth of Pennsylvania’s state contract or ‘cooperative purchasing’ program. The Department of General Services administers the contract with the intention providing a channel for procurement that can be swift while also making it simple to seek out approved vendors with vetted best pricing. There are state programs similar to COSTARTS across the U.S. The state takes the lead in vetting vendors as well as their pricing so that entities throughout the state, which could be anything from municipalities to educational institutions, have the purchasing power of much larger entities,” Tom says.

Adds Kathy Tedone, governmental buying specialist for Volvo Construction Equipment, “Volvo is seeing a significant and consistent increase in the trend by our municipal partners to purchase from cooperative contracts. These contracts offer the flexibility to purchase equipment that meets their specific needs at the most competitive pricing available while saving time and money.”

The savings go beyond hard dollars. Lycoming County Landfill is a gas-to-energy plant, repurposing the methane gas created from the decomposing waste. (Food waste is the largest type of unrecovered material sent to landfills.*) Wells are sunk into the cells to siphon off gases and pumped to an on-site facility where the methane powers four generators that produce approximately 50 million kilowatt-hours per year, preventing the equivalent of 34,000 tons of carbon dioxide emissions each year.

The Lycoming landfill has sufficient capacity to accept waste through at least 2030. “People are changing their habits, you no longer see burning barrels in backyards,” says Jason. “Still, over 70% of the total volume of material we receive is MSW. While every facility across the Pennsylvania, and the United States, is seeing a drop in total waste produced, the reality is there will always be a need for a landfill.”

And a need for dependable equipment to maintain those landfills.