How Cherrylake is Redefining Sustainability for the Landscape Nursery Industry

Think Florida, and instantly Disney and oranges come to mind, and rightly so, as tourism and agriculture are the state’s first and second largest industries. Financially, greenhouse and nursery products are Florida’s top leading crops, yielding $1.79 billion per year, and Cherrylake is one of the largest producers of ornamental trees in the state, growing over one million trees a year on their 1800-acre farm in Groveland.

Ornamental potted trees were not the crop Cherrylake’s founders, Veronique and Michel Sallin, envisioned when they move to Central Florida from France in the late 1970s.

Says Cherrylake’s president, Timothee Sallin, “My parents started Cherrylake as a citrus company and were exporting to Europe. Then in 1983 and 1985 there were 100-year freezes in Florida, which killed off a lot of the citrus trees in the region. Everyone in the business was devastated, including our family. All the trees on our land were dead to the roots.”

From adversity, Cherrylake regrew into a stronger company. The Sallins moved their citrus crop to land farther south in the state with less risk of freeze, then reclaimed five burnt-out acres on the Cherrylake property, where orange and grapefruit trees once stood, as a proving grounds for a new venture.

Says Chloe Gentry, the Sallins’ daughter and director of marketing and organizational development, “There were new methods in containerized growing that were producing a better root system. My parents felt they could leverage this technology and innovation to bring a better product to market. “

Today, Cherrylake grows a select mix of shrubs, palms and trees in containers up to 300 gallons in size, some of which can take 14 years to reach maturity for market. The most popular product is the live oak, a keystone species in many of the states to which Cherrylake sells. Rounding out the inventory are magnolia, crepe myrtle, holly, maple, elm and Leyland cypress trees. Customers are wholesale commercial landscape contractors, theme parks and PGA golf courses.

Says Chloe, “Our customers come to us because we provide true solutions that are unique and customized to each one of them. We produce quality trees that are sustainable and will thrive on their landscapes, and we offer services—whether it is logistics, horticulture expertise, or landscape installation—that can really bring them value.” (Cherrylake has International Society of Arboriculture-certified arborists and horticulturists on staff.)

The plants at Cherrylake are zealously consistent in color, size, shape and fullness. It’s the result of lean production transplanted into a nursery operation. This starts, quite literally, at the roots, in the greenhouse, where employees hand-plant thousands of cuttings and saplings per day. Over the next weeks, months and years they are repotted into larger containers and moved across the campus, undergoing exacting quality controls including precision pruning and targeted irrigation, before being selected for their end destinations. 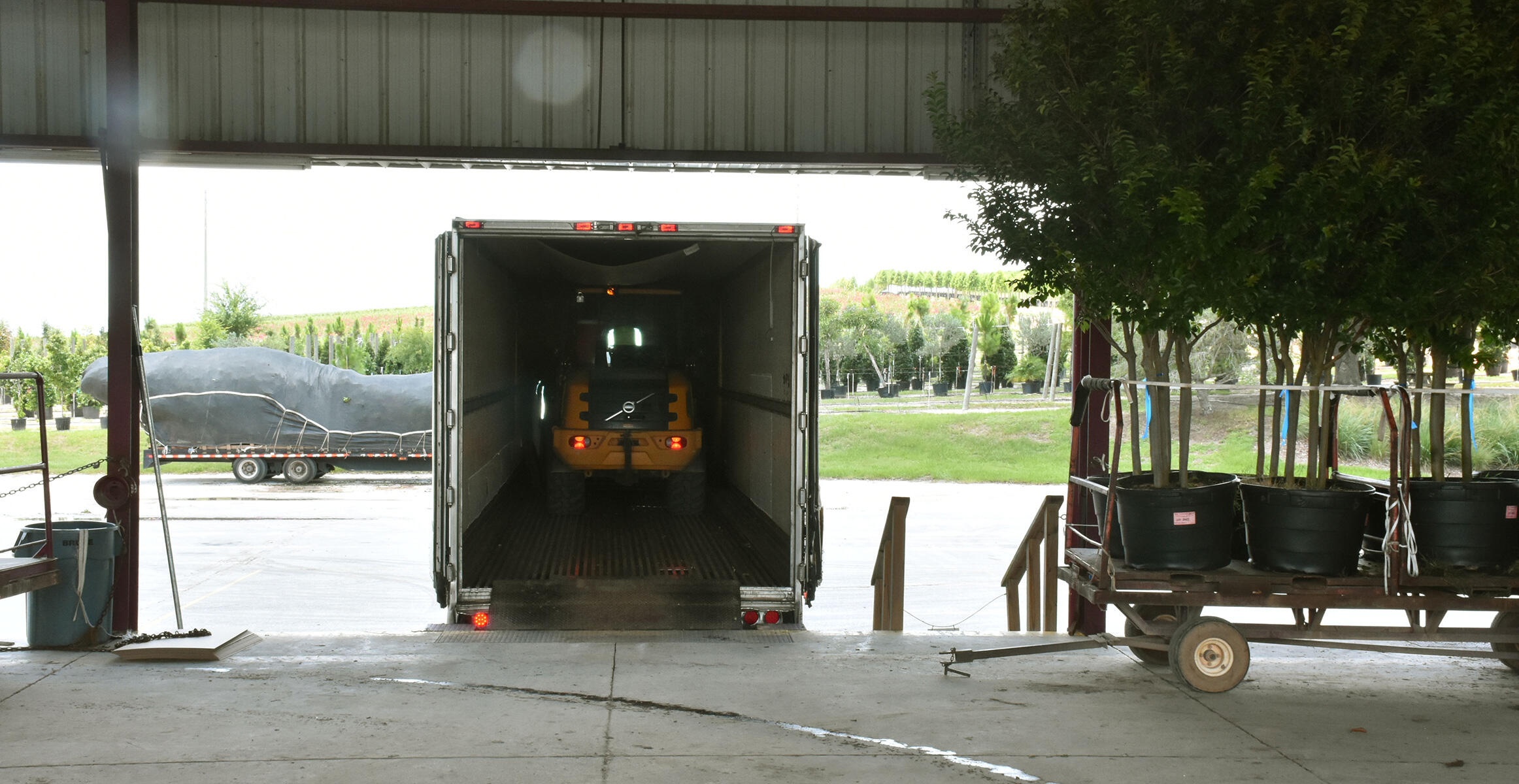 Lean production extends to the farm’s footprint. To maximize growing space, the entire tract is subdivided by plant type and age, with each compact section separated by narrow rows.

Since 2004, Cherrylake has relied on a stable of Volvo L20 and L25 loaders to handle virtually all aspects of the plant lifecycle. Says Herman Van den Bogaert, fleet manager, “First and foremost, the L20s are used at our loading dock, fitted with forks, to load onto trucks. We also use them to pull trailers loaded with containerized trees or plant material, sometimes up to six trailers at once, several miles up and down sandy hills. With the customized tree boom attachment, we can transplant trees to larger containers. And with the auger attachment we can drill post holes for our trellis irrigation system. We put them to the test and they perform exceptionally well.” Some of the first L20B loaders Cherrylake purchased are still working with over 13,000 hours.

The Volvo L20 and L25 are compatible with skid steer attachments, one of the big selling points for Cherrylake. And at less than 6 feet wide, the loaders can fit completely inside a tractor trailer to load trees for shipping.

Adds Herman, “When we choose equipment, there are three things we look for. Number one is quality. Second is serviceability. It’s the serviceability for us to maintain it, and then the service of the dealer or manufacturer if we have issues beyond our mechanic’s ability. And the third factor is obviously the cost. We’re a business; cost is big.”

Speed is another reason Cherrylake chooses the Volvo loaders, says John Comrie, product manager for Volvo Construction Equipment. “The L20H travels at 19 miles per hour, so you can get around the farm quickly. And the Volvo patented center oscillation joint gives great stability over rough terrain when carrying heavier, unusual loads.”

Volvo loaders have two separate hydraulic systems, one for steering and one for work hydraulics. John says, “When Cherrylake’s operators are going through the rows of trees and they want to articulate or steer while lifting out tree boxes, they always have the maximum oil available so it makes work very smooth and efficient.”

Says Todd Gentry, director of operations, “I have referred Volvo to other partners - and competitors - in our nursery industry. If they didn’t work, I wouldn’t have 37 of them. I would encourage anyone who is thinking of Volvo to go to their local dealer and ask for a demo. Try it out. We’ve run them against all the competition and we are sticking with Volvo.”

Eric Beer, account manager with local Volvo dealer Flagler Construction Equipment, has worked with Cherrylake for a dozen years. In that time, he has seen an uptick in compact wheel loader acceptance with clients in other segments across Central Florida. He says, “The applications where they are a perfect fit are smaller jobsites to shuttle dirt, or residential areas with limited space but where you need lift and dump capacity to load into a truck. For landscaping contractors, these are the ideal machines to move mulch and small aggregate. Waste and scrap contractors are also adding more compact loaders into their fleets, equipped with a grapple bucket.”

A tree farm is, by nature, a flagship for sustainability. But Cherrylake takes that to a higher level. Says Chloe, “We don’t want to just rely on the quality of our products but continuously find ways to improve how we produce it and minimize impacts on natural resources. We do that through water management, beneficial pest management, and partnering with vendors and universities and customers to move the industry forward with the end goal; we are here to provide a sustainable product for generations to come.”

In 2016, Cherrylake was awarded the Agricultural Environmental Leadership Award from the State of Florida. Over the past five years, Cherrylake reduced its water consumption by 15 percent, while simultaneously increasing its production by 15 percent. They employ simple but effective methods, such as grouping plants with similar water needs in the same irrigation zones. In addition, the farm has converted to a new irrigation emitter that saves approximately 80 million gallons of water each year. They are also taking advantages of new agriculture technologies to reduce fertilizer and pesticides.

Sustainability also refers to a business philosophy that, on the surface, runs in the face of convention. Says Timothee, “Growing trees requires time and a long-term perspective. When the Great Recession hit in 2008, many nurseries were forced out of business as tree prices fell by over 50%. Most nurseries, including ours, were losing money for every tree sold. It was very easy for nurseryman to make the decision that it’s not a good time to plant.”

Cherrylake took the counter approach. Says Timothee, “We had the foresight to say, no, when other people are not planting, that is when you want to be planting. We had confidence the economy would recover and we believed the trees we planted would be of high value four, five, six years later, when the supply would be tighter. And that’s exactly what happened. ” Cherrylake has recently branched into specialized landscape and irrigation construction and maintenance services.

Timothee says, “We don't define sustainability as, ‘once we accomplish this we can say that we're sustainable.’ It's rather something that's always set in front of our employees, and we look for ways to be a little bit more sustainable and reduce our impact every day.”

On the business and production sides of sustainability, Volvo equipment helps contribute to those efforts.