“Volvo makes one of the best pieces of equipment out there. I know, because we run the hell out of it.”— Butch Caton

For Butch Caton, it’s all about growth.
He started his company back in 1971, hauling scrapped out cars using a borrowed pickup truck. During the next 40 years, his odyssey in recycling has run the gamut. The central theme, though, is that it’s always gotten bigger. He started with cars, cutting them down and selling off metal as salvage. Later, he moved to locomotives. After that it was river barges. And today, it’s offshore oil and gas production platforms.

From his site near New Orleans, Caton can watch as scrapped  oil rigs, plucked from the ocean and put on barges, are deposited on shore. Some are more than 100 feet tall; massive networks of
steel towering above Caton’s nearly 50-acre recycling yard. Within a matter of days, however, they are gone — cut up and hauled off.
The salvageable parts are sent into Caton’s shop to be re-sold to companies who want to refurbish them. The rest is loaded onto barges and shipped to steel mills, where it will be melted down and recycled. 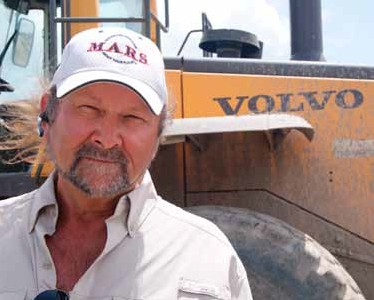 It’s one of four sites Caton owns near New Orleans. This one alone employs 60 people, many of them using cutting torches to reduce steel into recyclable pieces. Caton last year cleared $42 million in revenue. The growth during the past three years has earned his company — Modern American Recycling Services Inc. — a spot  on Inc. Magazine’s list of the nation’s fastest growing companies.

Those honors don’t mean much to Caton. But one thing does. “A magazine is a magazine,” he says, shrugging. “It’s what’s done out here that counts. You have to keep growing. We invest our profits back into the company and keep growing. That’s the goal. Then you know you’re doing things right.”

Standing there, watching one of his Volvo excavators — an EC290C — move cut-down pieces of an old oil rig from place to place on his yard, Caton says he always envisioned this day, even when he was scrapping old cars back in Ohio. “I just knew I wanted to be bigger. I knew there was more out there.”

Caton started his company by hauling scrap iron out of the back of a pickup truck. A friend of his offered him some junk cars that were parked in a pasture. Caton immediately saw the value of
them — not in refurbishing them, but in selling off their steel. So he rented a cutting torch for $10 a day and borrowed a truck from a neighbor. He did well. Soon he was able to buy his own truck
— and then a tractor-trailer. “I had it made then,” Caton says.

Caton eventually moved to New Orleans, where he continued his work. One time he found an old locomotive to scrap out. He was in the middle of cutting it up when someone pulled up and asked to buy some of the old parts. Caton remembers paying $5,500 for the locomotive. He sold $35,000 worth of parts. “After that, we didn’t cut up any more parts,” Caton says. “We began selling everything. It grew from there.”

More opportunities came after that. He once was offered a 35-by-200-foot hopper barge, weighing 220 tons. That first one took three months to cut down and recycle. Then Caton refined his process. He can dispose of one now in just 17 hours. “As we took on projects, we learned,” Caton says.

In early 2010, he was told there was steel to be purchased from the oil companies that were decommissioning platforms and rigs from the Gulf of Mexico. And so his platform and rig recycling operation was born on ground he purchased along a deepwater channel in Gibson, La.

During the seven months after Caton opened his operation, he recycled 34 drilling platforms — weighing from 1,500 to 5,000  tons on average. In the Gulf of Mexico, the platforms are brought into the coast on barges. Caton’s cranes lift them in chunks to the ground, where they are cut down into smaller pieces. Then his Volvo
excavators separate them into piles based on their metal type. Caton’s employees then go to work with their cutting torches. The parts that can be resold are separated out on their own. Everything else is
cut into pieces that are about 2 feet by 5 feet. They eventually are loaded back onto barges and shipped to a steel mill for recycling.

But none of that metal moves in or out of Caton’s yard without being touched in some way by a Volvo machine. He picked up his first piece of Volvo steel — an EC290 excavator — about 10 years ago. “We liked it enough that we bought several and then we squeezed out the (competition),” Caton says.

On this day, Caton was watching an EC290C moving large pieces of metal across his yard, using a bucket with a thumb attachment to lift chunks of steel and drop them into piles. Surrounding Caton were piles of more of the same, remnants of an oil rig platform that had been cut down off of a barge the previous day. “Everything
you see here has been moved by that excavator,” Caton says.

On this site, he has a handful of Volvo excavators and wheel loaders. A Volvo L110F wheel loader spent part of its day moving lumber from the docks deeper into Caton’s site. Another Volvo EC290C excavator was serving temporarily to hold a barge in place while a large section of a drilling platform was dismantled by a crane.

For Caton, a couple of things are key when purchasing his heavy equipment — comfort for the operator and warranty. Caton would be nothing if he were not constantly looking out for his employees. They spend 16 hours a day in their equipment. Those cabs must have air conditioning, a radio and cushioned seats. There’s no reason for an operator to feel terrible   at the end of a long day. “They love it,” he says of his Volvo equipment.

Meanwhile, Caton’s equipment spends a lot of time walking  heavy pieces of metal from place to place, an application that  can be brutal on undercarriages. But he says he’s had no trouble, thanks to Volvo guarantees and service by New Orleans’ Scott Equipment Company and his dealer representative, Dean Hall.

“The most important thing for a trackhoe is the warranty. That’s it,” Caton says. “Volvo gives a good warranty, and they honor their warranty and their service is good. If you’ve got something that’s not broken, don’t change it.” He adds, “Volvo runs one of the best pieces of equipment out there. I know, because we run the hell out of them.”