The Georgia Dome hosted the 1996 Olympics, four Super Bowls, several NCAA Men’s Final Four basketball championships, and over 37 million spectators. It was a marvel of design when it was built in 1989, owing to the half-mile-long concrete ring beam that wraps around the roofline, making it, at the time, the largest covered stadium in the world.

In November 2017, when the Adamo Group brought the dome down in a mere 12 seconds, it was that design that made it the company’s most challenging demolition job to date. The project's bidding also came at a very difficult time for the Adamo Group. However, 18 months later, it was the job that cemented the Adamo name as one of the premier demo contractors in North America.

Late fall of 2015, construction was underway on the $1.6 billion Mercedes-Benz Stadium in Atlanta. The new arena would eclipse the Georgia Dome as home base for the Atlanta Falcons NFL and Atlanta United soccer teams. The Dome would be leveled for an entertainment complex with premium tailgating space, a luxury hotel and park.

At the time, the Adamo Group was in Detroit razing a 15-story hotel. That project was one key to prequalifying them for the Georgia Dome demolition. There was a very specific stipulation for the project, that contractors under consideration must have recent high-rise demolition experience, as well as stringent bonding and insurance requirements, all of which Adamo met.

Just months before the qualification process for the Georgia Dome began, Adamo's CEO, John T. Adamo, Jr., was lost in a tragic construction accident in Ohio. Now Richard was hurled into managing the 100-employee company and 20 open projects, while dealing with the personal aftermath of losing John.

Rick Cuppetilli, Adamo’s Executive Vice President, assessed the project and advised Richard it was a headache they should avoid. “We are not interested in this. Due to recent events, I don’t think this job is for us,” Rick told him. It was riddled with red flags: a complicated concrete ring, close proximity to the new stadium, and an aggressive takedown schedule.

Richard made a decision that would propel his company from good to great. “I said, ‘if we prequalified, we have to bid it.’ The main thought on my mind was to preserve the company and ensure we stay relevant in the industry; to let everyone know that despite this terrible loss, Adamo is still here, we are still Adamo.”

Rick flew to Atlanta and spent three days with a local blasting contractor Steve Pettigrew. The two percolated ideas and Rick came back to Detroit with a 180 degree change in perspective.

Richard recalls, “Rick came into my office and said, ‘We figured it out, we know what we have to do.’”

Their recipe was calculated on exhaustive engineering reviews and the right mix of explosive types, amounts and locations.

The main compression ring sat on top of the dome, with the roof attached by cables, supported by 6’ x 5’ foot cast-in-place concrete pillars. The Adamo plan would collapse the ring squarely into the center of the dome, preventing any debris from impacting the new stadium 80 feet away or the Georgia Congress Center, at spots just 8 inches from the Dome. Since the shock could also affect the MARTA rail tunnels 50 feet below the stadium floor, seismic monitors were used to keep reverberations in check. 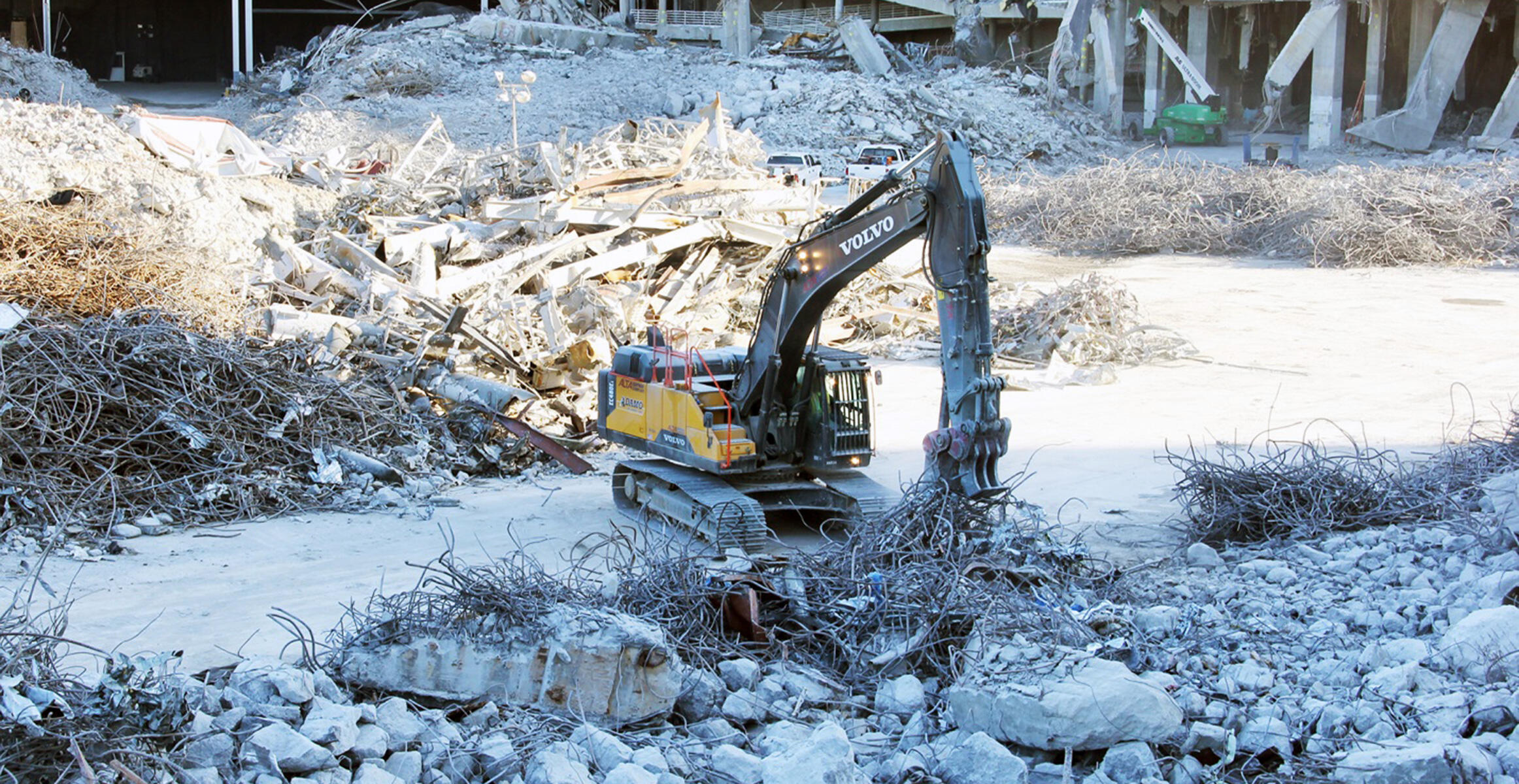 Traditional means would erect scaffolding around the dome, then have crews manually cut the ring and support beams, before lowering each section to the ground. The Adamo-Pettigrew method would erase almost a year from the demolition schedule.

Richard confidently presented their proposal to the review committee, sealing the deal with his word. “I told them, if we didn’t know we could do this we would not be sitting here, able to be competitive price-wise and meet all of the project specs.”

Blasting walls were placed around the perimeter to protect the surrounding structures. Adamo explains, "We had 4,800 pounds of dynamite, 4,300 pounds of TNT and 300 pounds of linear-shaped charges. The linear shaped charges cut the ring, and the TNT was used for the concrete columns."

Shape charges, strung together with six miles of detonation cord, were tactically wired around the ring to ensure the blast energy pulled the ring inward. On November 20, Richard pressed the button that set the live-broadcast implosion in motion, successfully falling the dome without any damage to surrounding structures.

Crews continued working 24-hours a day over two shifts with a fleet of 18 excavators and wheel loaders, including two Volvo EC480EL crawler excavators and L250H and L350F wheel loaders. Over 250,000 tons of concrete and 16,000 tons of ferrous scrap were processed, with 98% of that material recycled on site. All concrete was crushed on-site by mobile crushing equipment and used to fill the void and provide a 14-foot base pad to reach the same elevation.

The site reclamation work wrapped three months after the implosion, and the new Home Depot Backyard Experience is expected to be open in time for the 2018 Falcons season.

There was only one Georgia Dome, but Adamo has already notched another stadium dome implosion to their portfolio, the Pontiac Silverdome, which was taken down in December 2017.

Back in Detroit, Richard Adamo took a personal look-back on the project and his own evolution over the past two years. He says, “I have learned to not give up, to always look for ways to solve problems as they arise. My default managerial mindset is to be a pessimist, but now I sit back, review the information and learn to rely on the experience and guidance of the people we have on our team. There are a lot of similarities between how I conduct business and how John did business. We are very methodical. We are not guys with big egos. Our dad was a simple man. He went at the work and never gave up no matter what was thrown in his lap.”

In 1964, John Adamo, Sr. was a young man with a young family and a builder by trade. He was struggling through a recession that hit Detroit when he ran into an excavation contractor. The excavator was getting paid pennies on the dollar for each load he took the local landfill because he didn’t have a City of Detroit building license. John Sr. obtained the necessary local licensing, then stopped building and started wrecking, first with residential teardowns, then on to commercial structures.

Adamo found their sweet spot in 1980 when they won a bid to demolish a 5.5 million square foot Dodge Chrysler plant. That led to future jobs in industrial strip-outs of automotive factories, tearing out manufacturing lines to retool for new production.

Richard credits innovation in equipment with the radical change in the demolition industry over the past two decades. The work is more precise with less manpower. He says, “An example is the 24,000 to 30,000 pound excavator range. We have a number of machines this size because we can fit it with a shear inside of an automotive plant aisle for pre-demolition work instead of several hundred laborers with manlifts and torches. The new generation of attachments with auxiliary hydraulics allows us to work much faster and safer for both interior and exterior work.”

He adds, “At the end of the day I measure success on the number of repeat customers you get. You can’t please everyone, but regardless of how a project goes if you get another opportunity to bid with that customer, that was a successful job.”

Visit Adamo's website to watch a video of the Georgia Dome Implosion.