During late September through October, as the temperature begins to lower and the leaves change into brilliant New England fall colors, the culmination of a year`s work begins with the annual Cape Cod cranberry harvest. Each year, the region harvests over 14,000 acres of the ruby red berries, known as America’s first fruit.

Today’s cranberry growers are third and fourth generations to farm the bogs.

For an equal number of generations, the water reel has been the chosen method to pick berries. This equipment advanced from walk-behind inventions to ride-on and motorized versions, each designed and produced by the individual farm. The reels churn the flooded bogs, gently coaxing ripe berries to the surface so they can be corralled and suctioned out of the water.

More recently, grower innovation led to a new generation of custom-designed motorized harrows, led by Shane Gates of Rock Village Farm, who has set industry standards for size and design.

This year, a crop of Volvo L20H compact wheel loaders began appearing across the bogs, used to power the harrows.

Bob tenaciously introduced the loaders grower by grower. They are a tight-knit set who have weathered a testy market for their berries and competition from Wisconsin, which now leads the nation in cranberry production. They take pride in their land, their occupation and heritage and lean on each other for support. They share what some describe as a “brotherhood of the bogs.” Most are members of the Cape Cod Cranberry Growers’ Association.

As a native of the Bay State, Bob wanted to help the growers thrive and knew that the compact loaders could assist them far beyond the short harvest window.

Gary Weston, owner of Weston Cranberry Corporation in Carver, was the first to switch to Volvo compact loaders. He instantly realized how much faster he could harvest berries. For Gary, the decision to go with Volvo was based on the proven experience he had with his fleet of Volvo excavators and trucks, and trusting Bob’s advice.

Gary says, “I like the quality of the Volvos, their ease of use and the comfortable cab with heat, a/c and radio. With a travel speed of 18.5 mph, once we finish with one bog, the Volvo can be driven to the next bog rather than being trailered as with our previous machines.” 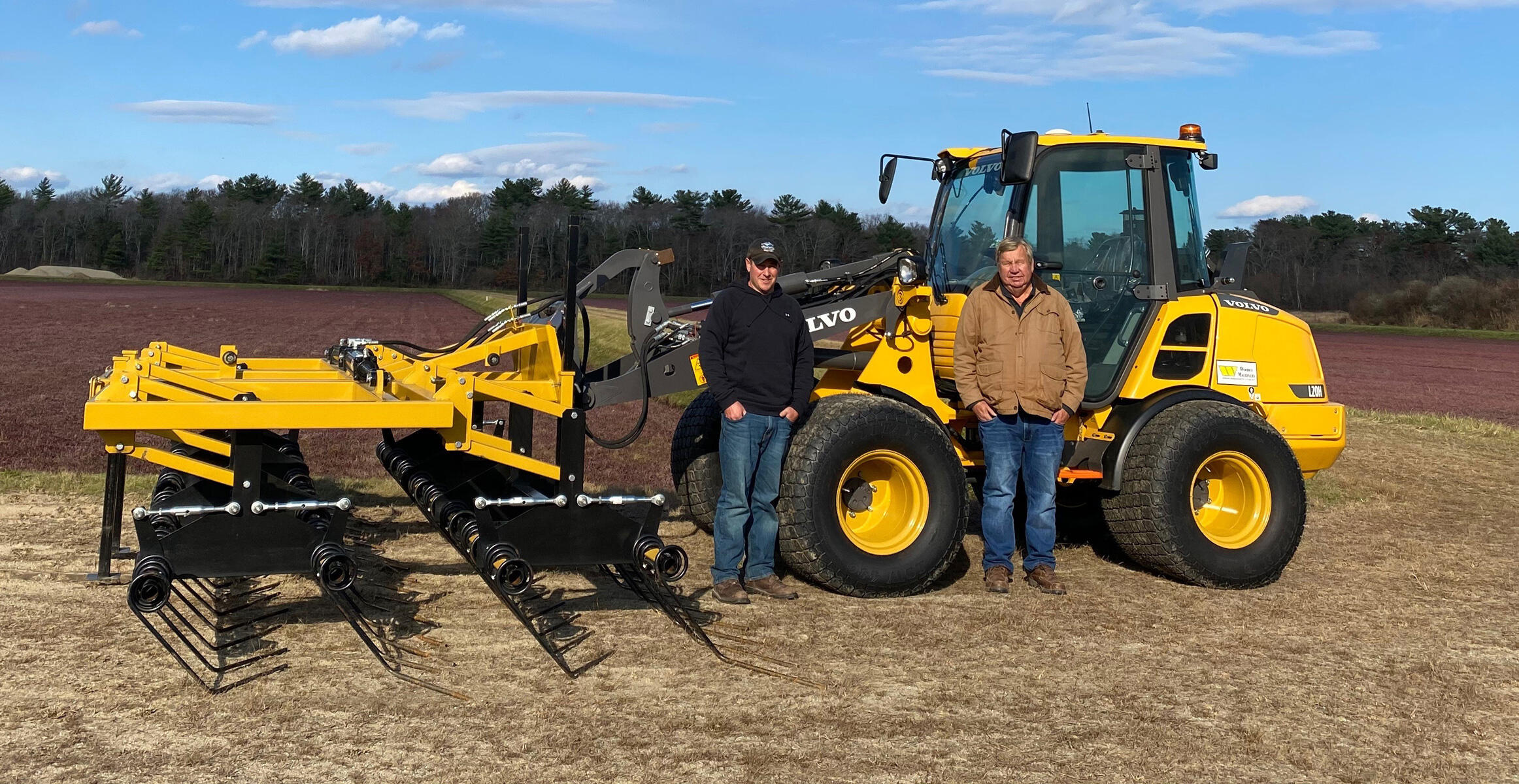 Another convert is Derek Harju with Ken Harju & Sons Cranberries Inc. in Middleboro, Massachusetts. “With the Volvo loader, the time to pick a 26-acre bog has gone from ten hours with three water reels to five hours with one machine,” he says. Derek uses a special 4-tine harrow on his loader.

The Volvo loader skims across the bogs at a speed of three miles per hour versus 1.5 miles per hour with the homemade reel machines. The custom 17-foot wide harrow takes fewer passes, resulting in less disturbance on the vines. Derek also opts for biodegradable hydraulic oil for a safer environment.

Because it can be easily fitted with a range of attachments, rather than store for another season the Volvo is on duty year-round. On Derek’s farm, it will function as a forklift, be fitted with sickle-bar mower, load small bog sanders and plow snow. 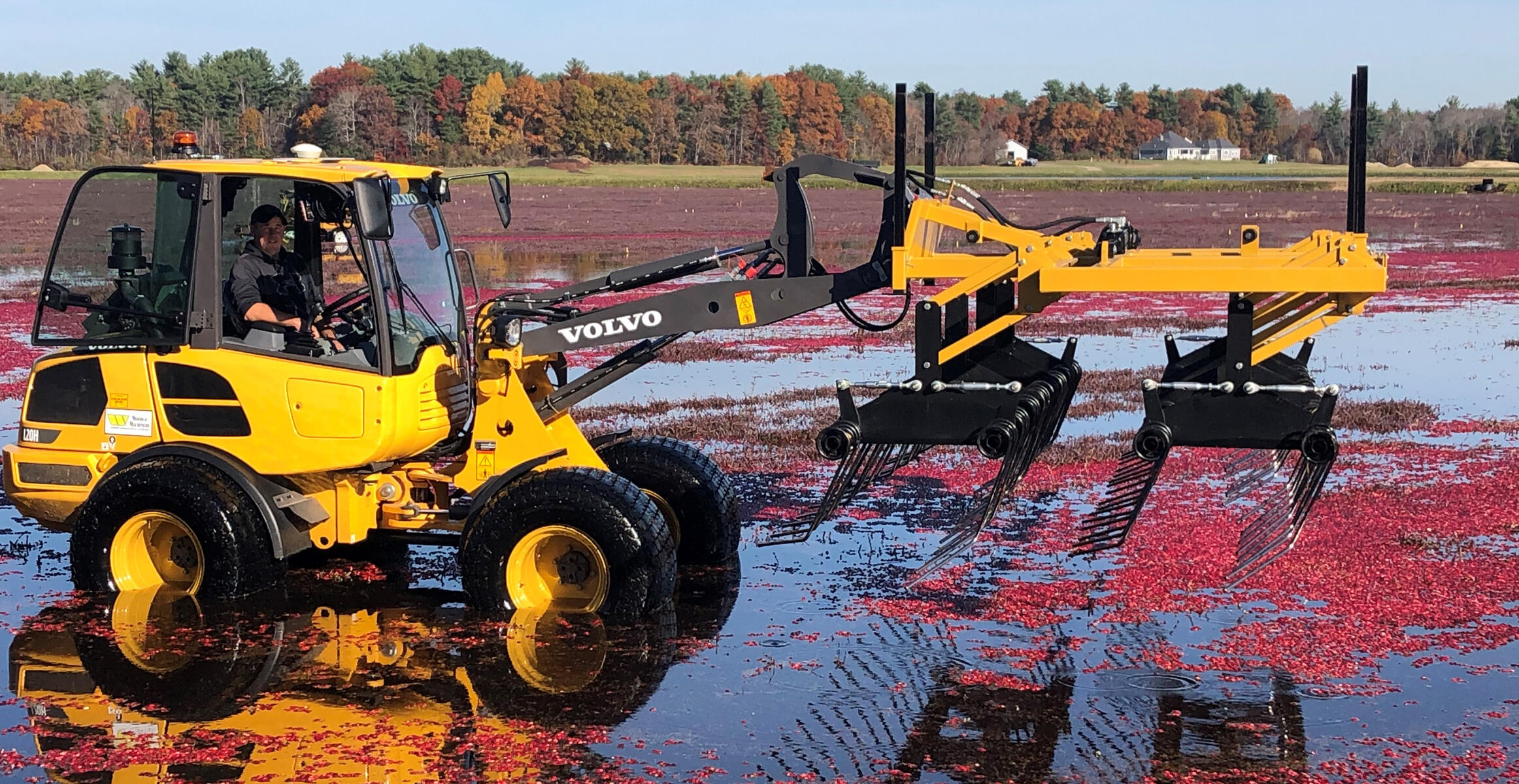 As Volvo shifts to electric compact equipment, today’s diesel loaders may one day be superseded with all-electric models, which offer the same power and performance. It’s a plausible next step for this group of growers who straddle staying rooted in tradition while eyeing a sustainable future for their families and farms.

In addition to Gary and Derek, Cape Cod cranberry growers throughout the region use Volvo excavators, loaders and haul trucks, including:

Cape Cod cranberry growers are moving to Volvo L20 compact wheel loaders to help harvest their annual crop. The loaders are fitted with locally-made harrows to churn up the ripe berries in the bogs for harvesting.