Lance Matheson faces challenges common to every equipment owner/operator: winning bids, hitting deadlines and dodging weather. Adding to his headaches, are the hassles of finding a ride to the job site and someone to haul his excavators.

That’s reality for Lance, the 14-year-old owner of Sage Demolition and Land Clearing in Layton, Utah, just off the eastern shore of the Great Salt Lake.

As baby boomers retire and skilled trades struggle to come back from the recession of the late 2000s, Lance is setting an example for his peers of how rewarding it can be to get into the construction industry.

“A lot of people my age use their free time to play video games or stuff like that, and I use that time to develop a skill that I can use for the rest of my life,” says Lance.

GETTING AN EARLY START

Lance, known to many as “Skiggy,” grew up around equipment thanks to his dad’s construction and landscape recycling company, Evergreen Soils.

“Years ago, Dwayne would come to work, and he'd bring Skiggy out with him,” says Dee Knight, a yard foreman at Evergreen Soils. “He had his blanket and he would get tucked in the seat with Dwayne and ride there for hours. Even fall asleep in there beside him.” 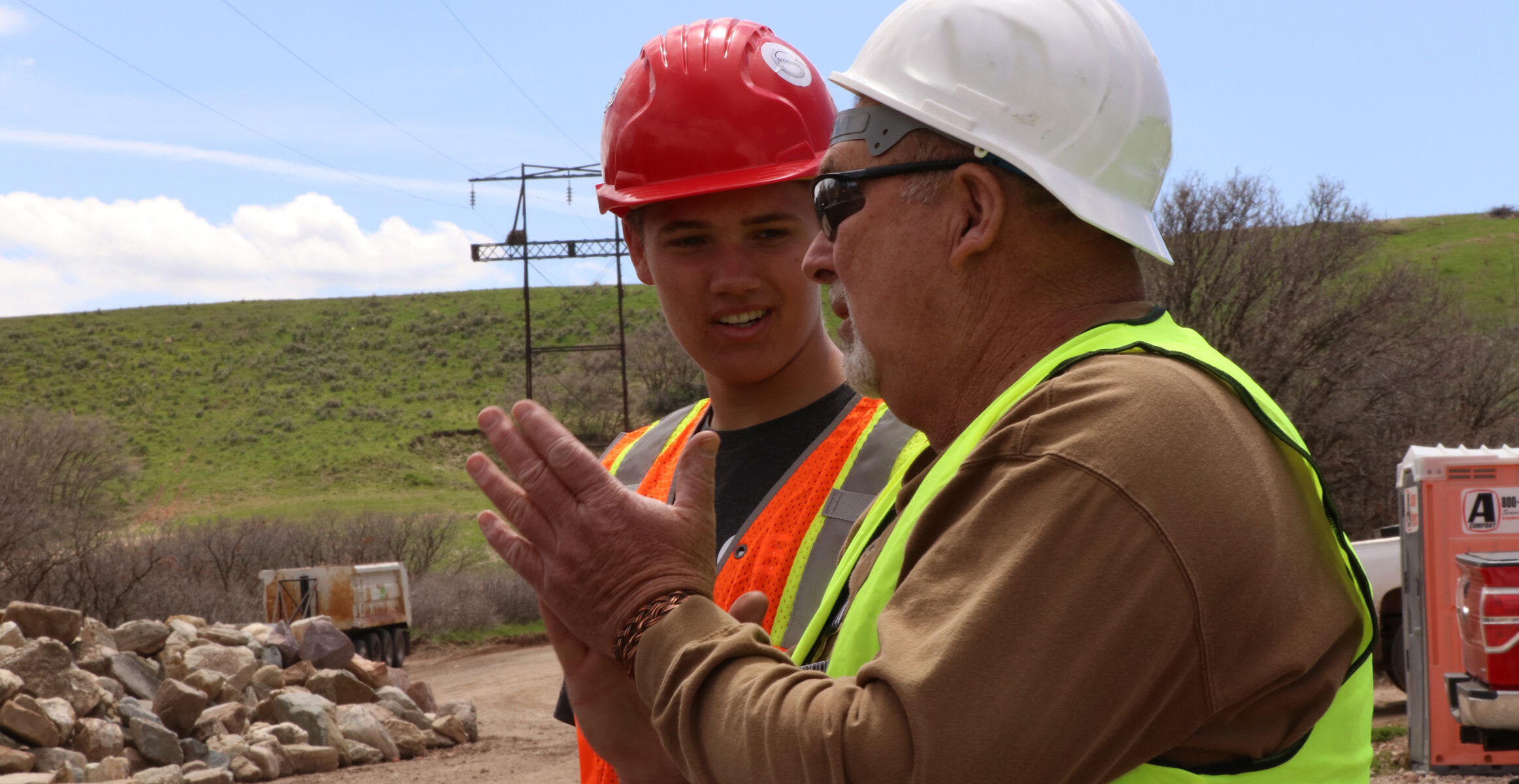 Lance with Dee Knight, one of the mentors who helped him learn to operate equipment.

Lance spent more and more time in machines with his dad as the years went on and gained seat-time experience. At age 13, he earned his state-issued general contractor’s license (B-100) and engineering/demolition license (E-100). He incorporated Sage Demolition & Site Clearing, with assistance from his sister, Aubrey, who is an accountant, while sister, Amy, chipped in for marketing support.

Eventually, the family decided home schooling would be best for Lance. “I felt like I could better use my time because, if you can just do the home school intensely and then do the work intensely, that's better than just doing school all day,” says Lance.

The venture has become a full-fledged business that has impressed many in the local construction industry – and beyond- earning him larger jobs. Recently, Lance was subcontracted by Target Demolition on a multi-million dollar Salt Lake project.

“I've been doing this since 1966,” says Knight, whom Lance considers a mentor. “I've never run into a young man that picks up on this so quickly and loves it so much.”

“I was instantly taken aback by how much this kid knows about the industry and the equipment,” says Gale. “I have to really do my homework on any machine I'm going to go sell him because he'll test me on it.”

Lance and his father keep safety and training in the forefront as well.

“He figures things out pretty easily but at the same time, the experience that I have is necessary to keep things in line,” says Dwayne. “Some jobs I let him do completely on his own. Some jobs I'll drop him off and pick him up several hours later. Other jobs I'm right there with him the entire way.

LOOKING TO THE FUTURE

Lance’s work ethic and passion for the industry are unique for a 14-year-old, and baby boomers still working in the trades would probably agree that more up-and-comers like him are desperately needed.

“Skilled operators of heavy construction equipment, it's a dying art,” says Dean Garrett, co-owner and president of Morgan Pavement, who hired Lance to demolish several structures on his property. He says, “What parents and school teachers should be teaching the youth today is to go out and get trained. A four-year college degree or a post-graduate degree is not the answer to everything. They're good and we need those degrees out there as well, but we need skills training. I would encourage them to look into the trades. The trades are going to pay well in the future.”

One advantage young people have in the industry is how tech savvy they are from an early age.

“With the next generation coming up into the business, there have definitely been changes in technology,” says Gale. “It seems that the younger generation is grasping these technologies with the advent of GPS and grade control, and computerized everything.”

Dwayne is confident his son will succeed in the industry because he’s not like a lot of people his age.

“He has a very mature outlook on life. He's not caught up in typical teenage activities,” says Dwayne. “I mean, he's really a horrible video game player unless it's a Volvo simulator.”

When Lance is online, it is either to check leads from his online marketing efforts or study and critique YouTube operator videos. One influencer Lance credits with helping him hone his skills from afar is Chris Guins, a.k.a @letsdig18.

Still, Gale says that in many aspects, working with Lance isn't much different than working with any other contractor.

“When I talk to him on the phone, it's kind of hard to discern that he actually is 14 years old,” Gale says. “He speaks to me like we've known each other for 20 years. It kind of blows me away.”

Lance attributes his interest and skill level to the pros he’s been privileged to learn from, like Knight, Garrett and his father. They have also instilled in him a strong sense of customer service.

“My dad taught me that it's more important to keep the customer happy than it is to save yourself a couple bucks, because reputation is what's important,” says Lance. “It's better in the long run to spend an extra hour doing it right the first time.”

He credits Volvo construction equipment for much of his success and growth, too.

“My dad had an old L90C wheel loader that is the first piece of Volvo equipment I ever ran,” says Lance. “I recently traded my 210C excavator in for a 220E and I really like this machine because it's fuel efficient. It's fast. It's precise and it's reliable. Now we have three Volvo excavators and six Volvo loaders.” (Lance bought the EC220 in 2018 and owns it free and clear.)

“I do listen to Lance on his equipment recommendations,” says Dwayne. “The reason I have so much Volvo equipment is due in great part to him. He's spent countless hours going through brochures and watching all the Volvo videos. He's become quite the expert on machine specs and what's out there, and I never bet against him anymore.”

Thanks to the reputation he’s built, Lance has a very clear vision for what’s to come.

“In 10 years, I would like to have a well-established demolition business, have enough employees and be able to run two crews,” he says. “With those two crews, I would like probably two 220 excavators and maybe two 340s, and then mini and demolition excavators, dumps with the higher capacity stuff, and then a roll-on truck for the smaller stuff. Then maybe a loader to clean stuff up and that's pretty much it.” (A decade puts him at 24, an age when many are still trying to figure out their life direction.)

Teen Demolition Contractor Owns His Company and His Future: Part 1

As baby boomers retire and skilled trades struggle to come back from the recession of the late 2000s, Lance is setting an example for his peers of how rewarding it can be to get into the construction industry. Watch the inspiring story of how Lance got it all started and what he sees for the future of his demolition company.

Teen Demolition Contractor Owns His Company and His Future: Part 2

As baby boomers retire and skilled trades struggle to come back from the recession of the late 2000s, Lance is setting an example for his peers of how rewarding it can be to get into the construction industry. But he didn’t do it all on his own. See how Lance worked alongside some pretty key mentors and advisors along the way.

Teen Demolition Contractor Owns His Company and His Future: Part 3

As baby boomers retire and skilled trades struggle to come back from the recession of the late 2000s, Lance is setting an example for his peers of how rewarding it can be to get into the construction industry. See what Lance’s customers have to say about his business knowledge, operating skills and determination to keep it all going.