Berg Steel Pipe Corp. has been a staple in Panama City, Fla., since the plant opened in 1980. Chance Suggs, manager of the shipping department, has been with the company for 21 years. Recently, the company needed front end loaders for shipping operations. Suggs compared other brands, but decided to go with Volvo wheel loaders.

“I got with Jim Oyler of Cowin Equipment Company, and the products sold themselves from there,” said Suggs. The company now owns two Volvo L220 front end loaders; one G model loader and one H model loader. According to Suggs the newer machine, the L220H, has counter weight for stability, the older model, the L220G, has water filled rear tires for stability. We found that the counter weight is a much better way to go and makes all the difference in the world.”

In addition to rear counterweight, efficient moving of the pipe requires the operators to clamp down the pipe and move the load as far back as possible and above the machine to ensure the best stability and center of gravity.

Proper tires also are important for moving pipe around the Berg storage yard. “Bridgestone is making a heavy tire that will work a bit better for us for turning on the asphalt. Both machines are Volvo L220s, both were purchased from Cowin Equipment and both are the main ’work horses’ of our operation,” said Suggs. 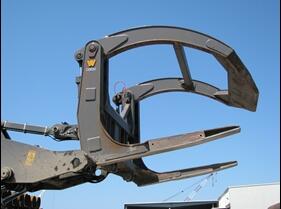 Wicker forks are used on these machines, and are named Wicker Berg forks after Berg, and due to the company’s continuous need for this type of fork. The difference between these forks are the curved radius on the top part of the fork clamp, which differentiates these from a mill fork or yard fork or even basic forestry fork. The design ensures the pipes are handled properly.

“Wicker took our needs and wants to actually develop the clamp for us. They added steel flat bar on top of the bottom forks of the clamp. Typically, the bottom of the clamp is like a fork. So we’ve got flat bar on top for a wider surface and they gusseted those and they come from Wicker pre-tapped so when we want to add pads to them, we can easily do it. The pads we use on the bottom of the forks are actually slip on polyurethane pads, that are simply slipped on and bolted. The upper is actually like a Teflon product that we order with a precut radius that we tack weld on the fork itself. This product lasts a long time. The bottom pads wear out much quicker cause were carrying a load and stacking and rolling the pipe off of the pads. That’s why we use the slip-ons for the bottom fork so we can change them out fast. The forks are very durable. We’ve had repairs done on them but have never had to completely rebuild,” said Suggs.

These Volvo front end loaders have held up very well, according to Suggs. Berg runs these loaders at top safe speed around the pipe yard with two 40 ft. (12 m) pipes weighing in at 18,000 lbs. (8,164 kg) each, or one 80 ft. pipe at the same weight. With these loaders, crews will stock pipes four high throughout the yard. Anything higher than that, crews need to top them off with the “green machine” (Sennebogen) equipped with a vacuum clamp.

The Wicker Berg type of attachment only requires the addition of a third valve for the upper clamp. This is something that Cowin now takes care of for Berg prior to machine delivery.

Cowin’s Jim Oyler said, “we can order add-ons from the factory and Volvo can take care of these machine upgrades as a factory installed item, with sufficient lead time. The H model loader that we delivered we ordered from the factory with all the ad-ons pre-installed.”

Suggs said what sold him on the Volvo front end loaders was the increased handling capacity and the oversized tires-which gives the machine a wider stance.

“When we handle 80 foot pipes, I want as much rubber on the ground as possible. The overall engineering that went into these machines is more suited to our needs than other machines we’ve looked at or used. Price, of course, factors into it, but the best bang for our buck was these Volvo units. The little things such as the factory installed auto-lube system, was a big plus for us too. I want everything to be as factory installed as possible and neatly packaged and good to go. We’ve run other machines, but by far, these have been the best.”

According to Oyler, the boom suspension has been a successful selling point for this loader, which insulates the machine and allows operators to hit speeds of 15 mph with a full load.

“These machines are in constant motion,” said Suggs. “Two shifts a day are operating these machines 20 hours a day, 6 days a week. Hugh Dobbs from Cowin Equipment coordinates the maintenance of these Volvo machines when they’re not running on Sunday. This works very well for us.”

The company purchased its first Volvo, a L180C loader, 15 years ago.

“We took the forks off and put a bucket on it and still use it every once in a while around the yard to move dirt or whatever we need. The newer loader purchases, the L220G was made last year and the L220H was in January of this year.”

Another helpful feature of the Volvo is the steering wheel and stick steer combination. “Some of our older operators like the steering wheel and our younger ones like the joystick. The joystick actually tightens up on the steering at higher speeds and compensates for the speed. So at a higher speed the machine will compensate for the speed and will turn the loader at a slower rate for overall stability. Actually, all of our guys have gotten used to the joystick control,” said Suggs.

“Our operators have likened these machines to a Cadillac and say the cabs are very comfortable. The sight from the cab has plenty of glass to see everything around you. Even though both machines have back-up cameras, you can still easily see behind you without the assistance of the camera. I’m anticipating that replacement of these loaders will be required on a 4 year cycle after they’ve accumulated 20,000 to 25,000 hours.”

Berg Steel Pipe Corp.’s pipe inventory is mostly for natural gas pipelines. Currently, it consists of primarily heavier wall, 42 in. (106.6 cm) diameter pipe. Most pipe goes into natural gas industry only, which is about 99 percent of Berg’s business.

“We’ve also got another mill in Mobile, Ala., that is a spiral pipe mill. They have produce pipe for the Mexico market but we’re still primarily producing for the U.S. and Canada. Our parent company in Europe also sends us pipe at 40-foot lengths that we’ll join together, coat and send it out as 80-foot pipe. So we actually import and export pipe here,” said Suggs

“What distinguishes Berg from other mills is quality, rapid turn-around and delivery time,” said Suggs. “Most of the products from Berg go out on rail lines, trucks, barges, and an occasional vessel.”

The proper machinery keeps the company running smoothly and Suggs said working with Oyler has been beneficial.

“Jim is very knowledgeable about these machines and he’s not just a pushy sales person, which I like a lot. He pretty much said ’here’s what I’m offering for you. Let me know if it works for you.’”

“Chance and his guys actually joined us at the Pensacola, Fla., location to look at machines that would meet their needs. The L220 size loader seemed to work and they demoed it around the yard, we added new forks and other options needed to make it into a pipe handler, and delivered the machine to Berg ready to roll. Thirty minutes after delivery it was loading pipe and I was there to make sure it worked perfectly.”

According to Suggs, the company had no problems with the machine or Cowin Equipment Company.

“Cowin has been easy to work with. We’ve had some issues here or there, small things are going to happen when you run machines this hard. Even though they’re based out of Pensacola, we’re still getting same day or next day service. Service and working with Jim has been good. When it’s time for a new one, I’ll be calling him.”

Suggs also had high praise for his company.

“At Berg, the longevity of the employees in the company has been incredible. Some have been here since the 80s. It’s a good company to work for. We try to treat our guys fair and honest, provide a good wage and give them whatever they require to do get the job done. Most people at Berg have been here quite some time.”

A total of about 400 employees work at this location, which makes Berg a major employer in the Panama City, Fla., area.