Alaska has produced more gold than any other place in North America, including the Yukon and Klondike fields, which tend to capture more “gold rush” glory. Mining started in 1870, just a little southeast of Juneau. Today, operations range from large industrial-scale surface and underground mines on one end, to the inexperienced self-proclaimed prospectors and adventurers on the other.

Two of the more productive Alaska gold mines are Fort Knox, an open pit gold mine 25 miles northeast of Fairbanks, and Northern Star Resources’ Pogo Mine, an underground mining complex located some 38 miles northeast of Delta Junction. Combined, they grind out 47,000 tons of ore and pour up to three gold bars (2,100 troy ounces) each day.

The Pogo deposit was initially discovered during exploration of an area with a minimal mining history. Gold, arsenic, bismuth and tungsten were all found in geologic samples taken from Pogo and Liese Creeks during a regional mineral evaluation in 1981. By the late 1990s, drilling confirmed that the Pogo site indeed contained major gold deposits. Soon thereafter, the extensive multi-year permitting process started, and in January of 2005 underground mine development began, resulting in the first Pogo gold pour in February of 2006.

The Pogo Mine, with an onsite permanent staff of around 350 and another 100 independent contractors, consists of more than 49 miles of underground roads and drifts that wind deep inside the hills rising from the banks of the Goodpaster River. Miners drill and blast rock and dig ore in the dark corridors of the mine 24 hours a day, 365 days a year. The ore is then moved by a conveyor belt to the above-ground mill for processing.

Says Pogo Mine General Manager, Chris Kennedy, “Right now, our grade per ton is about 3.8 ounces of gold. On an annual basis, we produce some 957,000 tons of ore.” That number translates to about the same amount of waste that has to be moved to get to the gold. To date, the Pogo deposit alone has yielded more than three million ounces of gold.

Moving that much rock, soil, sludge and other materials requires a lot of man and machine power. At their start, Pogo relied on a pair of Volvo A40E articulated haul trucks, and later added a second pair of Volvo A40F articulated trucks, all of which are still being used on a daily basis.

Recently, Kennedy and Pogo Maintenance Manager, Kim Threlkeld, started to look at the various options for a bigger haul truck to augment their existing Volvo fleet. “We were running a bit behind the underground guys with our four A40’s,” says Kennedy. “It’s not that I wanted to get rid of them, they were great, we just needed to add something bigger.” 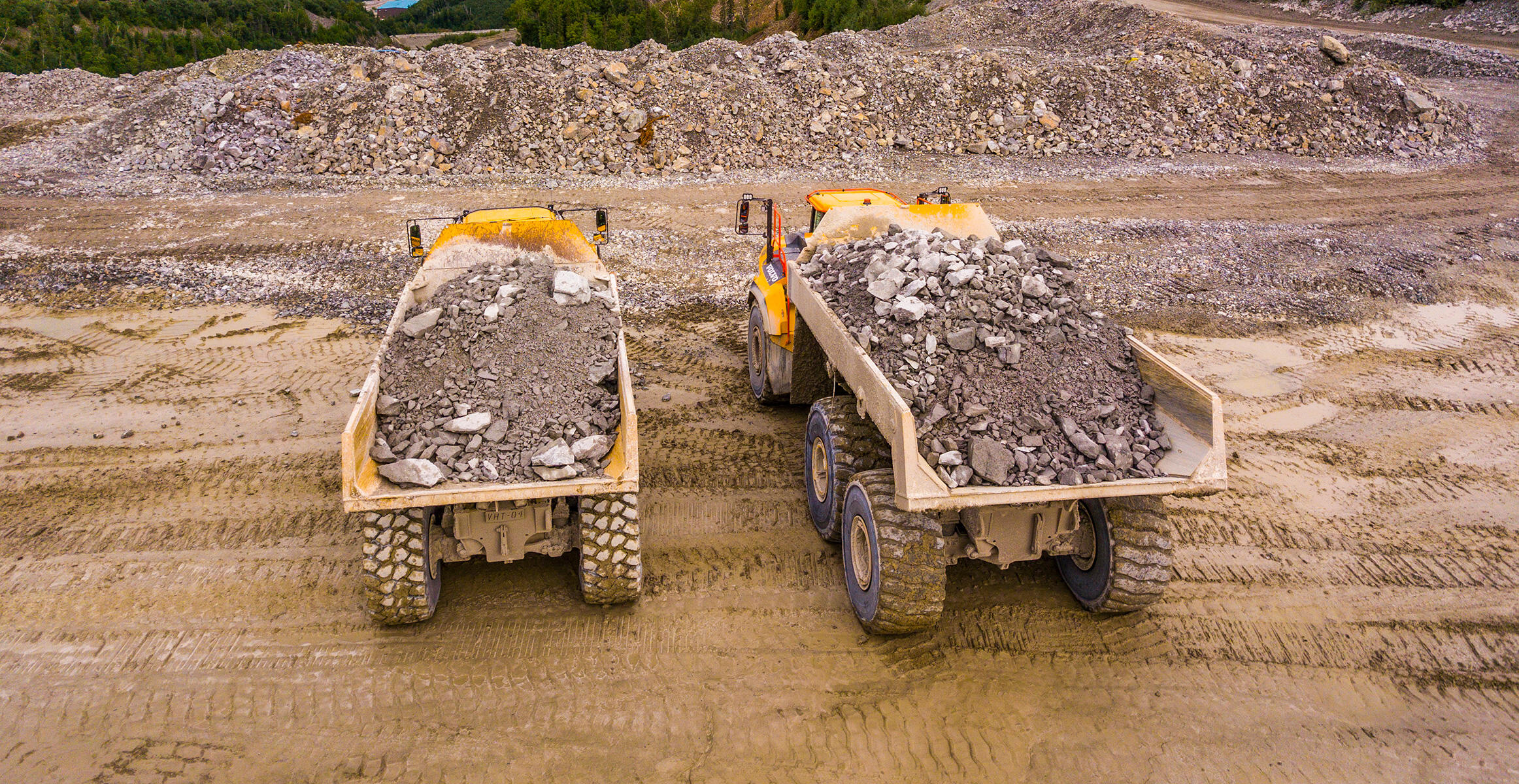 The new 60-ton Volvo A60H articulated truck had just been introduced to the North American market, and once the specs, options and cost considerations were taken into account, the decision was made to add two A60H’s to the Pogo surface fleet of articulated trucks.

The Volvo A60H represents a giant leap forward in terms of articulated haul truck technology. It is the world’s first 60-ton articulated truck. Its design was conceptualized for heavy hauling in severe off-road conditions, not unlike that at the Pogo Mine. The truck’s Volvo V-ACT 16-liter, 6-cylinder straight VGT (Variable Geometry Turbocharged) diesel engine delivers 630 horsepower and 2,960 ft lbf. of torque, allowing the A60’s to climb the 4-mile-long, 12 to 14 degree gradient road to the Pogo dry-dump day-in and day-out, moving load after load of tailings from the mine.

Not surprisingly, one of the more important features for the operator is the truck’s new all-wheel, fully-independent suspension. The fact that the unit is fitted with an active hydraulic front suspension makes a big difference, particularly since the operators spend long hours in the cab every day. Anthony Sousa, one of the Pogo heavy machine operators, puts it into perspective: “You’re hauling 1,000 to 1,300 tons of material per day over some very rough terrain, sitting behind the wheel for 12 hours straight, so comfort of the cabin is really important. And that doesn’t mean only the suspension, but also air conditioning in the summer and heating in the winter.”

Speaking of winter, the geographical location of the Pogo Mine means that winters are nothing short of legendary. “It could be 40 below, 60 below for days on end,” chuckles Kim Threlkeld, “and it’s really hard on the equipment, so we usually don’t turn them off. They run 24/7.”

Adds Atti van Rensburg, Pogo’s Surface Supervisor, “For the long winter nights up here, the new LED lighting system provides plenty of light to improve visibility and safety of operation. We even upgraded the backup lights to LEDs so our guys have an easier time backing up to the dry stack at night”.

The design concept between the A40-size machine and the A60 is essentially the same. For example, Pogo’s A60’s are six-wheel drive units controlled with Automatic Traction Control, but Volvo also provides a four-wheel drive option. It is a new machine, but in many ways it’s very much a familiar articulated truck. 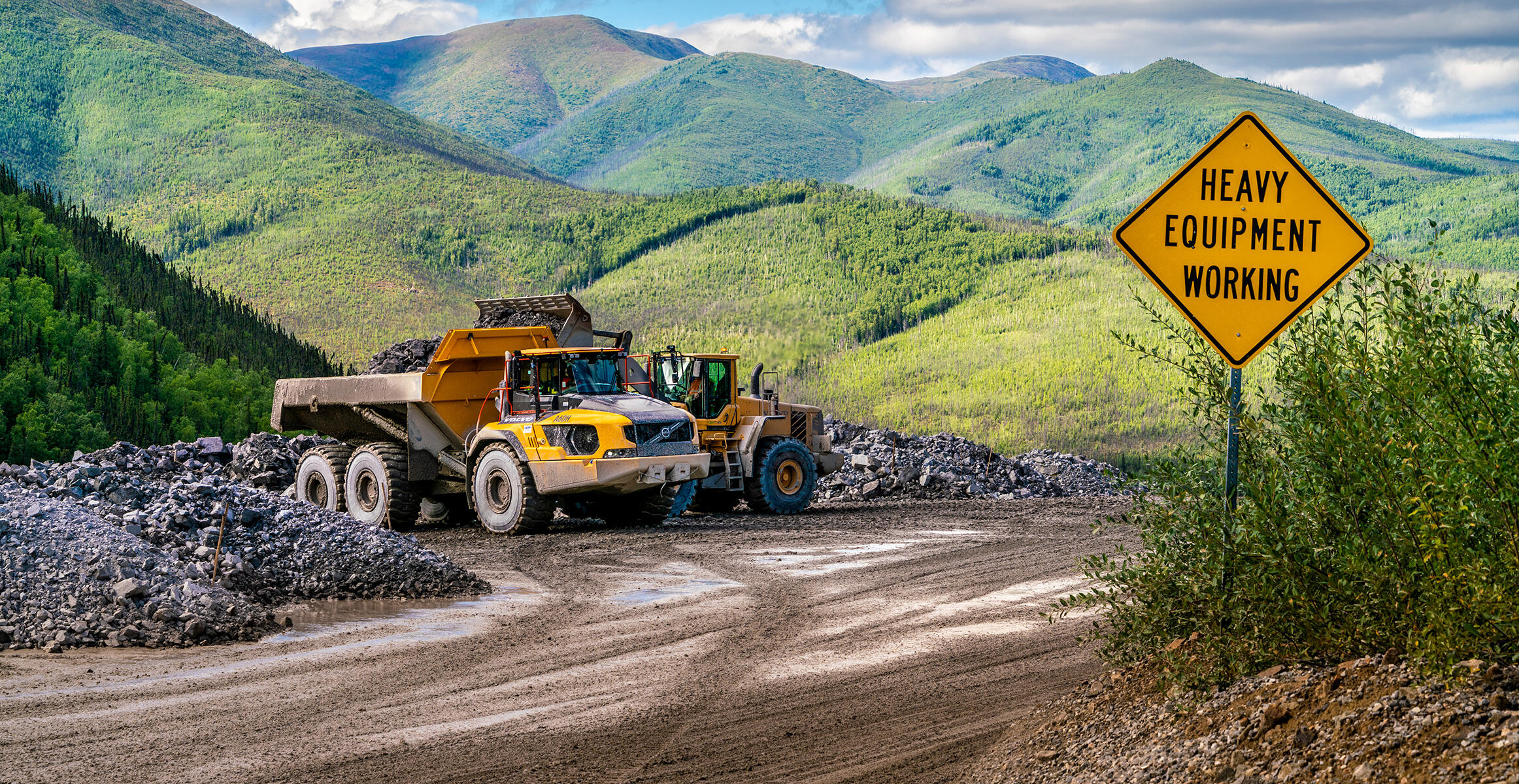 Reliability and longevity are essential, and the management team at Pogo have good reason to be happy about that; two of their older A40’s are getting close to clocking 50,000 operating hours and are still running strong.

Back at the mine site, Anthony Sousa is hauling another 60 tons of waste rock up to the dry stack with the Volvo A60H, while the mill keeps processing the seemingly never-ending stream of ore coming from the underground – keeping the mine on track to reaching their anticipated goal of four million ounces of gold by the middle of next year.

Pogo Mine in Alaska will produce over goal of four million ounces of gold this year. See why Volvo A60s haul trucks help them reach their goal.