A Model For Success With Intelligent Compaction

Granite Construction prepares for the new norm, hitting 100% bonus along the way

Currently, 23 states have written intelligent compaction (IC) specifications for asphalt paving jobs, and that number is only expected to grow. Among those states with IC specifications is California. As with many of the states, however, although they’ve invested time and resources into developing the technologies, California has not yet translated IC into specifications for most highway paving jobs. Many believe Caltrans is waiting for the industry to familiarize itself with the tools and technology before making the requirement a norm. However, it’s only a matter of time, and those contractors who have gained proven experience with IC systems will be the ones to remain competitive when more jobs require it.

Granite Construction is doing just that, and their success in segueing into the use of IC can be viewed as a successful model for any paving contractor looking to gain experience and prepare for the impending requirements. Here’s how they did it.

As a 100-year-old company and one of the leading heavy civil contractors in the U.S., working in all 50 states — it makes sense that California-based Granite Construction would be one of the early adopters of advanced technologies. While Granite Construction does a wide variety of work —including federal, industrial, commercial and residential — their transportation work is what has given them notability in the construction industry.

Along with partner DeSilva Gates, Granite Construction began work on a taxiway reconstruction job for the Sacramento International Airport (SIA) in August 2016. While the company had not yet been faced with bidding on a Caltrans IC project that required density or stiffness measurements, they expect that it’s coming. Granite Construction saw the 35,000-ton taxiway SIA reconstruction project as the perfect opportunity to gain experience with the technology.

Even though this wasn’t an IC-specification job, the stakes were high for Granite Construction. If they could successfully pull off the FAA-specified 96.3 percent target density for this project using IC for the first time, the bonus would pay out at 6 percent of the $2.5 million paving budget. Standing in the way were challenging weather conditions, a tight timeline, strict FAA requirements, and of course, a brand new technology that they needed to learn.

The job consisted of four phases to replace all the SIA eastern taxiways, which were outdated and did not meet modern lighting, width and shoulder requirements.

“This kind of job is our bread and butter – from demolition and earthwork, to paving with our own asphalt mix from our local plant in Sacramento, this is the type of job that we go into very confidently about being able to meet and exceed expectations,” says Curtis. “That’s part of why we felt like it was a great job to get our feet wet with Intelligent Compaction.”

Phase one of the project included removing the existing taxiways. The old pavement was a 10-inch asphalt section over multiple base courses – a typical taxiway section.

Earthwork was phase two of the project, which lasted until October 2016 and included building new shoulders and the widening of a short section of the taxiway. All the asphalt grindings from the old taxiways were recycled and incorporated into the base courses for the new shoulders, and then Granite Construction re-graded the existing taxiway base courses to the new alignment.


A 14-inch lean concrete base was installed for phase three of the project, which lasted through November 2016. After phase three, it was time to pave — just in time for winter weather. 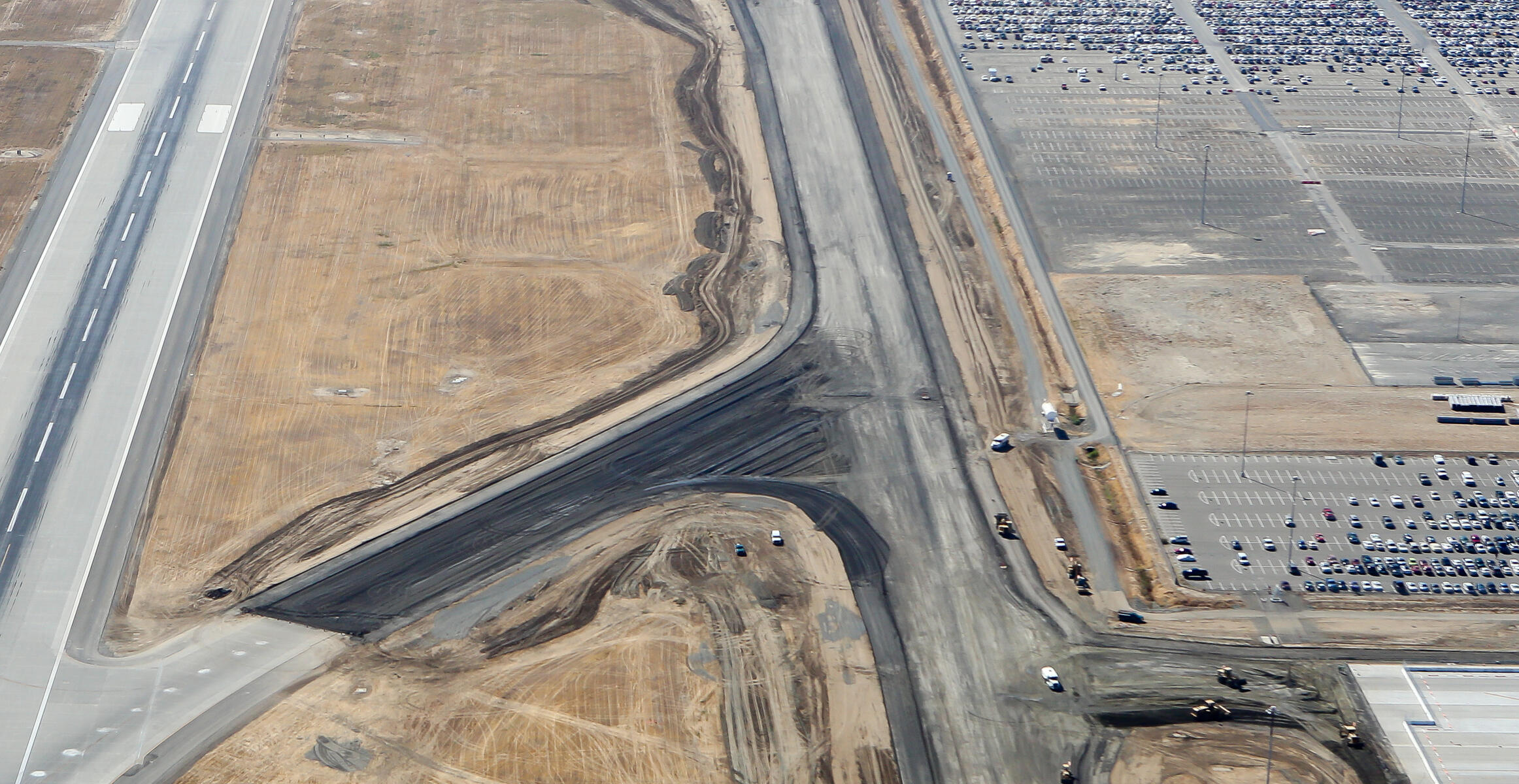 With the entire eastern taxiway closed, time was of the essence, meaning Granite Construction had to work through much of the winter season. The Sacramento winter weather is wet and experiences near-freezing temperatures. Reopening the taxiway on time — while adhering to the stringent specifications with minimal rework — took a coordinated effort.

The asphalt mix for the project was required to meet the FAA P-401 standard at three-quarters of an inch. The target density for the project was 96.3 percent, and had a percent within limits (PWL) specification of 90 percent. The PWL looks at not only the average, but the standard deviation. Granite Construction had a goal to get the bonus 100 percent of the time by hitting a PWL of at least 96 percent – 6 percent above the PWL specification set for the project. Meeting these specifications and staying on schedule was a tall order — but one that would pay off.

Granite Construction has a well established, proven quality control (QC) process in place that has served them well for years. For the Sacramento International Airport job, that meant three QC workers on site, and periodic core density and nuclear gauge testing.

For this project, they wanted to slowly cycle in an IC system to compare to what they were seeing with their existing QC processes. They looked to their equipment dealer, Volvo Construction Equipment and Services of California (VCES) for advice on what options were available, and ultimately decided to rent two compactors — a Volvo DD110B and Volvo DD120B — both equipped with Compact Assist, the Volvo Intelligent Compaction system with Density Direct™.

“Granite Construction brought up this project at the airport, which was not an IC-spec job that they wanted to try the product out on, because they could work out the kinks,” says Jake Zayas, VCES branch manager. “They felt like if they waited until there was a job with an IC requirement, and stubbed their toe, it would be costly. So, they were going to treat this job like it was an IC-spec job.”

Compact Assist with Density Direct differs from other available systems. While it does have pass mapping and temperature mapping functionality, as most IC systems do, Compact Assist provides density estimates in real time, rather than intelligent compaction measurement values (ICMV), which are essentially a measurement of stiffness. According to Zayas, ICMV has been a source of confusion for many of his paving customers.


“With ICMV, you’re seeing a value that doesn’t represent something in the job’s specifications. You might see a value of 40 on the screen, and then your operator has to try to figure out how that correlates to density,” says Zayas. “So when we explain Density Direct to customers, you can kind of see a sense of relief. It’s much less complex to see an actual density calculation on screen. In real time you can see, for instance, 95 percent relative density displayed on the screen, and know exactly what that means, because it’s tied to your job specification. That’s a big part of why Granite Construction came to us for this project.” 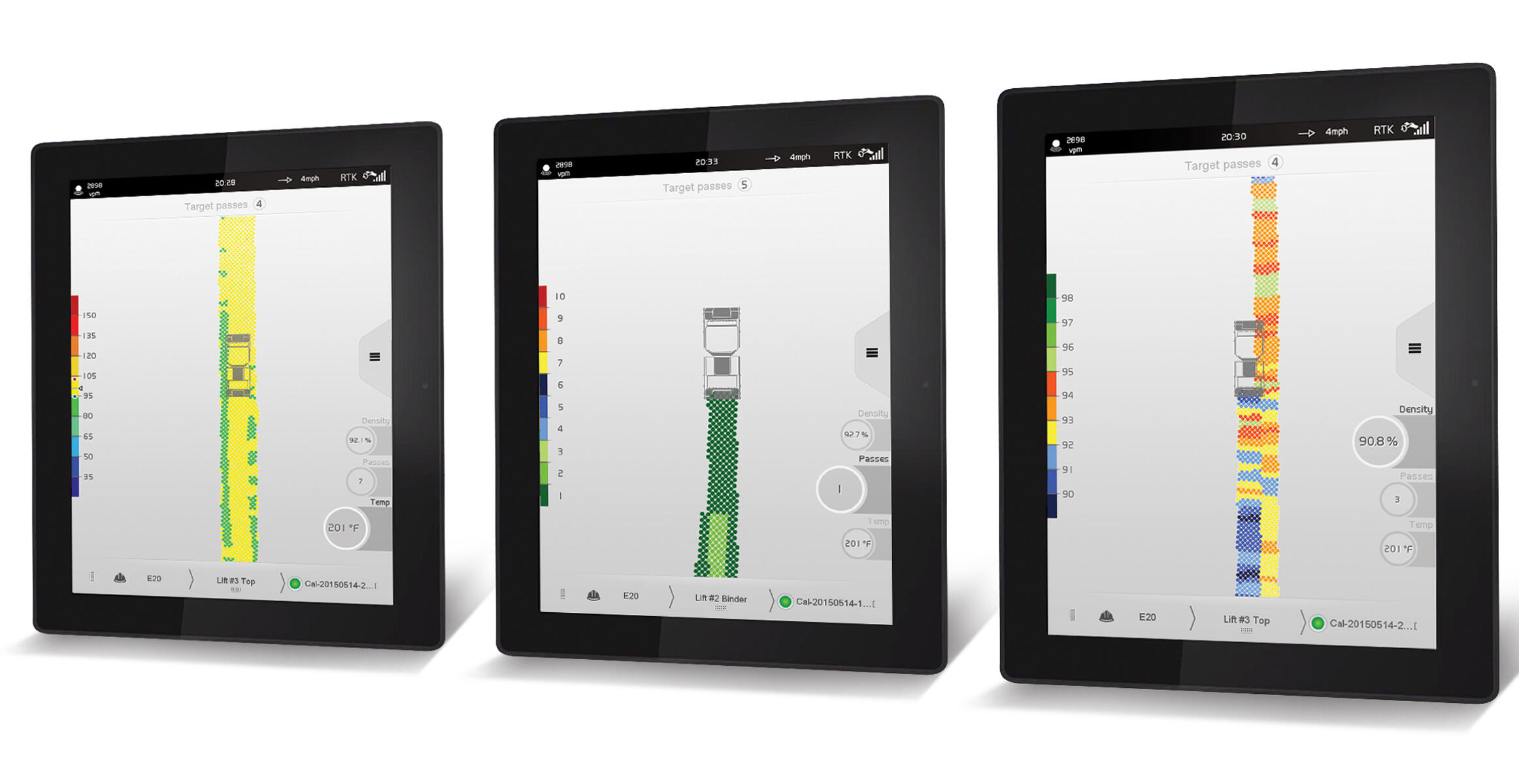 To help Granite Construction get started, VCES provided training on the system and assistance with calibration at the beginning of the paving phase of the project. Calibration allows the system to become familiar with the asphalt mix used for the job to ensure accuracy when calculating density values.

The calibration process requires that the operator to make several vibratory passes while the system collects data or trains itself for that specific material. Once calibrated, the system can save up to six unique lifts of asphalt per job, allowing the operator to select differing lifts during the daily work cycle.

“I would say the calibration process typically takes about three minutes, assuming you have no hiccups,” Zayas says. “But if you do have a hiccup, it can actually be a good thing. For instance, if it’s not calibrating, it probably means you’re running at the wrong amplitude for the asphalt mix — so it’s an added layer of quality assurance.”

What Granite Construction found after using Compact Assist alongside current QA/QC practices was that the density provided by Compact Assist with Density Direct was consistent with core density and nuclear gauge testing, and allowed the team on the job site to see the pass map and make corrections as needed. They used the first half of the project to gain confidence in their overall approach. For the second half, their intention was to rely more heavily on Compact Assist.

With the initial training and calibration complete and some work with the system under their belts, Granite construction began to feel comfortable trusting in the system. Halfway through the project, they saw an opportunity to reduce QC costs by removing one dedicated QC team member from the project. In fact, they used it as an opportunity to train a new QC team member — while remaining confident the project was on track.


“Part of what QC's doing is watching your rolling patterns. Well, now there’s a tool that tells you how many passes you've made over every section of the pavement, so you don't need that guy to be as attentive. It was definitely an added layer of comfort,” says Curtis.

With their confidence level heightened, Granite Construction rounded out the second half of the project with increased reliance on Compact Assist. Ultimately, their approach paid off.

“We actually hit the bonus on 100 percent of the paving,” says Curtis. “Most of the time we were able to hit 100 percent PWL because we were getting compaction in the 98- to 99-percent range which puts us so high above the job specification that, as far as that PWL is concerned, we've got a 100 percent score, essentially.”

Those are scores to write home about. 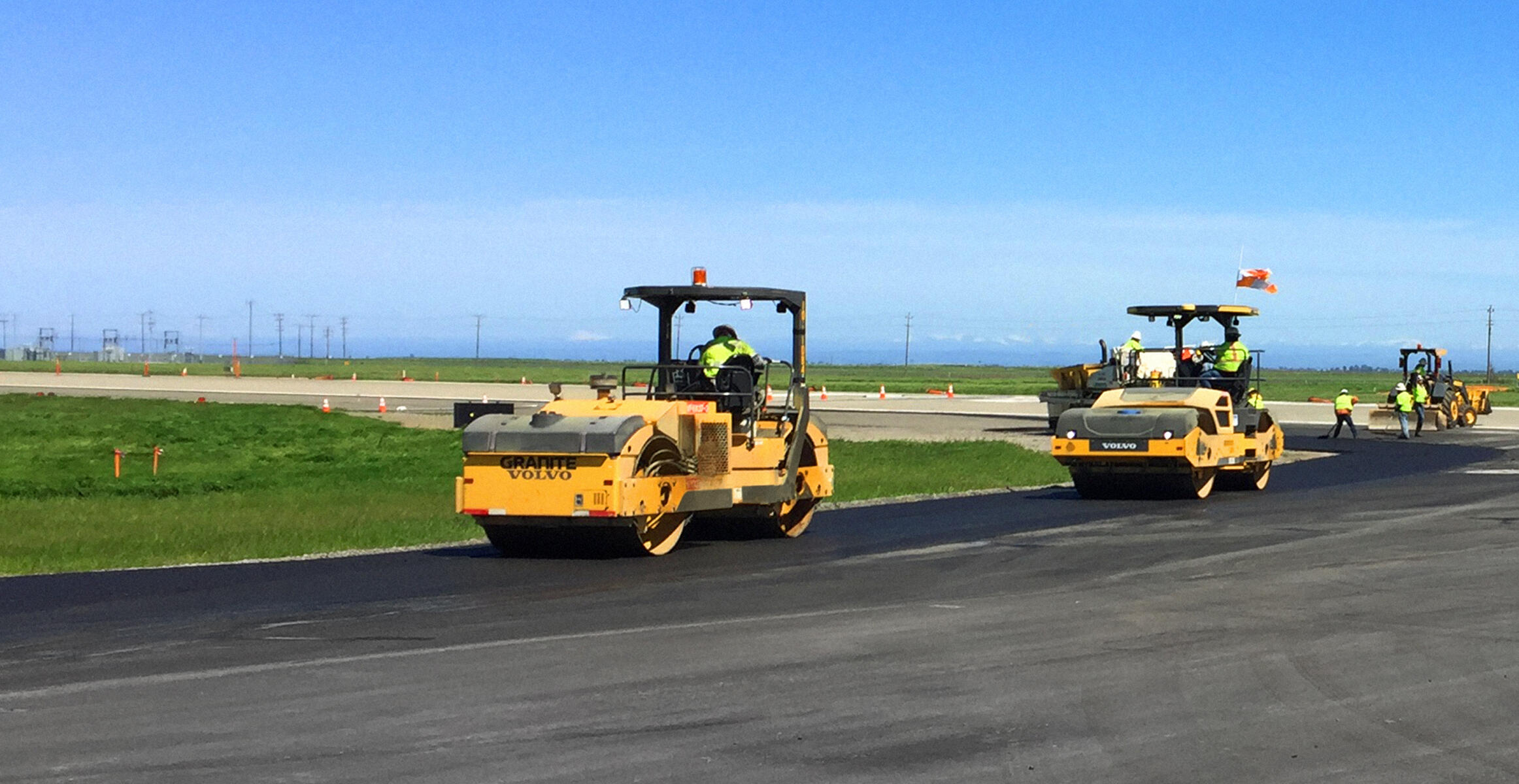 As job specifications begin to include IC more frequently, contractors may do well to follow in the footsteps of Granite Construction, leaning on equipment dealers such as VCES when they are not sure what specifications entail or what equipment fits the requirements, and testing out equipment with IC to get a jump on what’s to come for the industry.

“I think in the next five to 10 years, there's not going to be a roller that shows up that doesn't have some form of IC on it,” says Zayas.

And it’s not just for the big contractors or big projects that can benefit from using IC systems.

“It’s not just about meeting some requirement written into the job. There’s added value to the system,” Zayas says. “Even paving someone’s driveway, you have data to back up that you met compaction needs. It’s kind of like an insurance policy.”

As for Granite Construction’s plans with the technology, Curtis puts it simply.