A Man and His Machine Thrive in the Swamp Lands

“For any kind of dirt job I’m doing, it’s very productive. … I can make more money with Volvo because of the cycle times and the dependability.” — Perry Autin

Born to do this

Perry Autin wasn’t born in the swamps and marshes of Louisiana, but he might as well have been.

He’s spent a good portion of his life there. In his heavy Southern accent, he tells the stories of his early days, driving a marsh buggy through the wetlands, towing an oil exploration crew behind him. He helped design and construct the special vehicles capable of traversing the mud and muck of the deep South. And today, he’s as much at home there as any place.

Today, Perry owns a fleet of excavators that operate on marsh buggies, the large tracked amphibious vehicles that use pontoons and are capable of floating. His company, American Amphibious Equipment and Rental Inc., does virtually any job you could think of in the marshes. It does utility and pipeline work, it builds levees and terraces, it conducts wetland relocation projects. Anything that’s wet, Perry Autin is your man.

“Whenever you can’t use conventional equipment, you call us,” he says.

But Perry has a new piece of equipment in his fleet. Two years ago, he purchased a Volvo EC210B long-reach excavator that he’s using on a project to help move displaced soil from a $1 billion pumping station being constructed by the U.S. Army Corps of Engineers. When that job’s done, the excavator will be sent back to the marshes, working on any number of projects that keep Perry busy there.

Perry is so impressed with it that he’s willing to purchase another one if the
economy keeps up its rebound.

“It’s a high-production machine, very high,” Perry says. “It’s fast all around. The operators will brag about it.”

When Perry says he’s been around marsh buggies and the wetlands of Louisiana all his life, he means it.

His grandfather Joe Tassin — and Perry says no one has been able to disprove him — was among the first to create a form of a marsh buggy back in the 1940s and 1950s. There are pictures of Tassin standing next to his prototypes. One was propelled by two big steel tractor wheels that were hollow and could float.

The efforts eventually moved to tracked vehicles. Perry’s father, Wilton Autin Jr., learned from his father-in-law and in 1969 broke out to form his own company, Marsh Buggies Inc.

At the time, Perry Autin was just 10 years old. The company focused its efforts on transportation for oil exploration companies. It would pull barges through the marsh that would be equipped with shothole drill rigs, which would drill holes into the earth to set off shots of dynamite, hoping to locate oil deposits.

Perry was 16 or 17 years old when his father put him on his first seismic marsh buggy.” He threw me into the field,” Autin says. “It kind of forced me to learn. Loading them on trucks in the yard is not like anything in the field.

The client was a good client of Autin’s father, and so there was some leeway. Where there wasn’t any give, however, was in the conditions. Out there in the marsh, you’re pulling a crew of men on a rig, called a skid pontoon. Perry was winching the rig and pulling the men across canals. 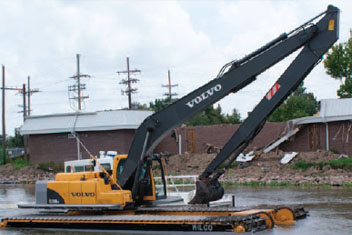 “If I did something wrong and yanked them off the rig into the marsh — the alligator pit,” Perry says. “I was mad at my dad then for putting me out there, but today I thank him.”

When the drilling companies started to buy their own marsh buggies, Perry’s father was forced to get into the drilling business himself to compete.

The rest is history of sorts. Marsh Buggies Inc. continued to grow. Perry left for a short time to start an oil field supply company. When that went out of business, he came back. And two years ago, he decided to strike out on his own again, this time with American Amphibious Equipment.

It’s all a natural fit.
“He’s been doing it all his life,” says Dean Hall, of New Orleans’ Scott Equipment Company. “Not a lot of people can say that. He was kind of born into it. He thoroughly knows the business.”


Out where it’s wet

Today, Perry runs mostly excavators doing all sorts of odd jobs in the marshes and swamps of Louisiana. A lot of the work is for the federal government, for the oil industry or for utility companies.

Out there, you might find Perry’s equipment building levees as the U.S. Army Corps of Engineers dredges federal waterways for marine transportation. At other times, you might find him working on a marsh restoration project. Still others, he might be constructing terraces that serve to collect sediment when the tide goes out, gradually restoring solid, dry land to an area that had become a marsh.

“We do anything to do with soft terrain, where conventional equipment can’t come in,” Perry says.

Now let’s say you wanted to find Perry out there. It might take an hour by boat to get there, through some of the most inhospitable swamp and marsh you might find. And wildlife? There’s plenty. From deer to alligators.

And once you’re there, Perry’s excavators dominate the skyline with their long booms and huge undercarriages that stand 6 feet high and are 30 feet long and 20 feet wide. They operate in no more than 4½ feet of water.And if you really want to see something, watch them float. For short distances, in calm water, you can stick an outboard motor on an excavator and move it from point A to point B.

But that excavator mounted on top of that marsh buggy is important, which is why Perry likes his Volvo excavator so much.

He bought his a bit by happenstance. Two years ago, he was in a pinch, and that Volvo EC210B long-reach was the only one available. But his operators recommended it to him. He’s not been sorry.

“No. 1 is dependability, which I find Volvo has been for me over the years,” Perry says. “Sometimes it’s an hour boat ride to get in and out of the swamp and marsh areas. That’s why we need a dependable machine. If we break down in these areas, we could be past our hip in mud and marsh and muck and alligators. It’s important for it to perform and not break down. All machines do, but Volvo has been very dependable.”

“We get excellent service. They’re on time,” Perry says. “Whenever we have a problem, they really push to get us out.”

But efficiency is crucial, too. When you’re in the marshes, you can’t afford to struggle with a slow machine, slogging around all day. You need something quick and easy to use. Perry says the quick cycle times of his Volvo machine set him up well. It’s got all the power it needs with the Volvo 147-horsepower D6E engine.

“For any kind of dirt job I’m doing, it’s very productive,” he says. “I bid these turnkey jobs, which is very important to me. A turnkey job is a hard number job, and as a lot of contractors know, it’s important in making, breaking even or losing money. I can make more money with Volvo, because of the cycle times and the dependability.”

Perry’s current job, however, is unconventional even for him. He’s been working to fill in some old pits with soil displaced from a major federal pumping station, part of the response to Hurricane Katrina. This isn’t a swamp. It’s an enormous man-made pit, partially full of water.

And so an amphibious excavator is in order. Perry has been working his machine 24 hours a day moving 50,000 cubic yards of dirt, some of it dry and some of it wet. Just after the first of the year, another half-million yards are expected to come in, all brought by dump truck and left for Perry’s Volvo excavator to move around. Operator Gene Burkes, impressed with the power of the machine, says he’s ready for it.