Volvo articulated haulers: half a century of success

Volvo Construction Equipment is not just the leader in articulated haulers – it created the market in 1966. As the concept reaches its historic 50 year milestone, Volvo is still creating machines that go where others fear to tread.

The articulated hauler concept is celebrating its 50th anniversary in 2016, marking five decades of transporting earth, gravel and a host of other materials over rough, muddy, slippery, steep or otherwise impassable terrain. And the company that commercially launched the concept in 1966 – Volvo Construction Equipment (Volvo CE) – is still the market leader. In 2016 Volvo CE continues to innovate with the launch of its H-Series range – which includes its biggest ever production articulated hauler – the 60 ton capacity A60H.

1966 was the year that the Soviet’s Luna 9 made the first rocket assisted landing on the moon, The Cultural Revolution began in China, England won the World Cup and the Rolling Stones were banned from 14 New York hotels. With so much going on it was easy to overlook the launch of the DR631, the birth of the articulated hauler. Essentially a development of an agricultural tractor (which Volvo then made) and a trailer, they were permanently joined via an articulating hitch, and the front axle of the tractor removed. Nicknamed ‘Gravel Charlie’, it may have had only a meagre 10 ton payload, but it set the stage for greater things to come. Surprisingly though, its popularity grew only slowly to start with, sales in the early years being confined to its home Swedish market.

One of the main reasons for the ongoing popularity of Volvo’s haulers has been the consistent development of the concept. Only one year after its launch, in 1967, the company introduced the DR860, the first articulated hauler with a bogie, meaning that the material in the load body remains level and stable (reducing spillage) while the wheels cope with very uneven road surfaces. The first hauler with a turbo-charged engine – the DR860T – arrived in 1970, and in 1979, things literally started to speed up, with the launch of the 5350. Capable of 50km/h, the ‘Off-road Express’ was able to maintain previously unheard of speeds, thanks to a suspended front axle and an automatic transmission. Traction was further increased with the addition of a six wheel drive system.

The A20 was launched in 1986 with a 200 hp engine and a 20 ton payload. Things soon got a lot bigger in 1987 with the advent of the 35 ton abilities of the A35, which also featured a retarder built into the transmission to reduce wear on the service brakes. 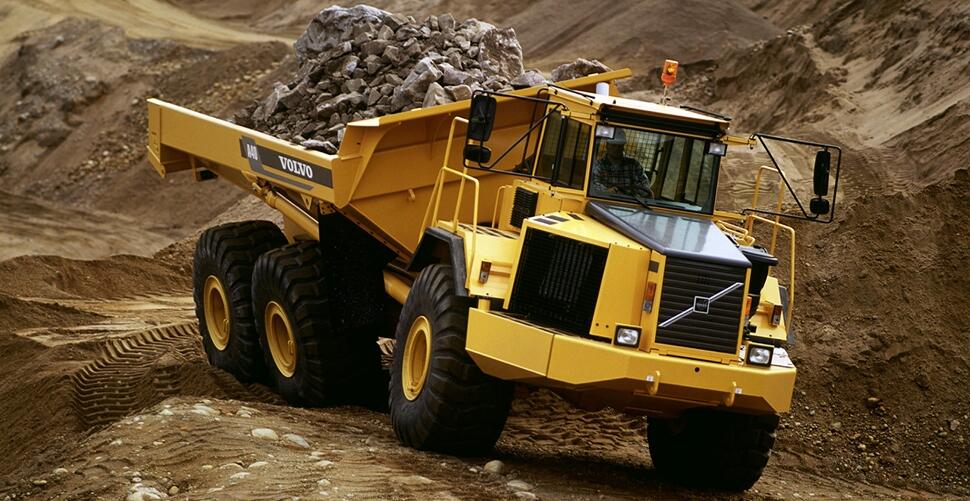 The range was given a major overhaul in 1993 with the introduction of the C-Series, which featured a low emission engine, fully automatic transmission and 100% differential locks. The 40 ton class hauler was launched in the mid-1990s, in the shape of the A40, pulled along by a mighty 400 hp engine and stopped by oil cooled wet disc brakes.

Bigger, stronger, tougher, more reliable, easier (and cheaper) to operate, safer for the environment and the operator – the D-Class of articulated haulers from Volvo CE were introduced in 2000 and continued to be far and away the best-selling hauler. Covering payload ranges of 24 to 37 tons, all D-series Volvo articulated haulers – models A25D, A25D 4x4, A30D, A35D and A40D – featured a comfortable cabin and no daily greasing. For the first time diagnostic electronics also alerted both operator and technician of problems before they became failures; thus increasing uptime. 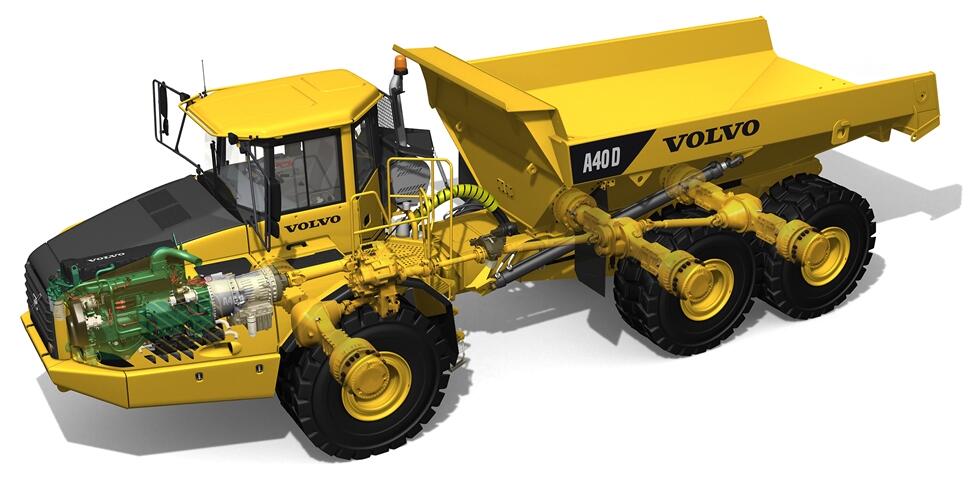 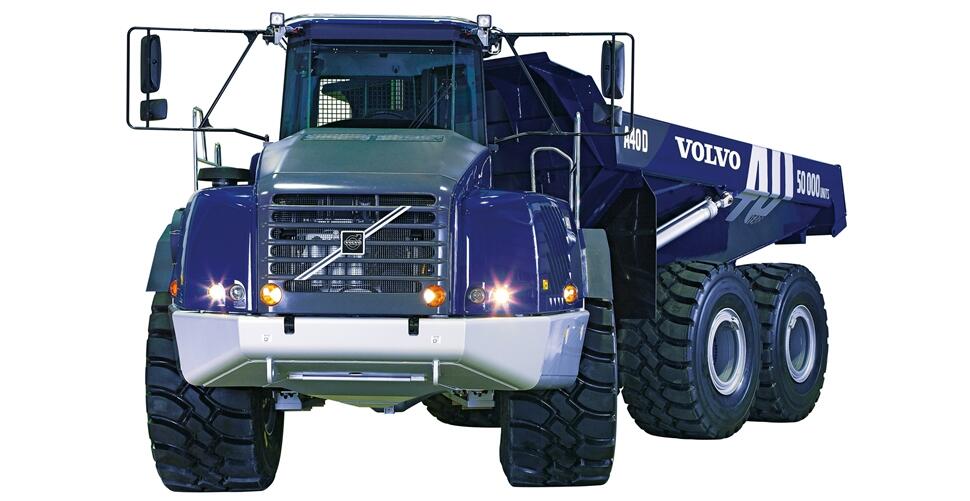 10 years ago the 50,000th hauler was commemorated with special ‘Volvo blue’ livery.

In 2007 Volvo CE decided to adopt a radical approach with the introduction of hydraulic suspension with automatic levelling and stability control on all wheels. This ‘Full Suspension’ variant provided excellent off road performance, allowing the hauler to travel at much higher speeds and increasing productivity. Even when fully loaded, the E Series haulers’ ability to ‘float’ over rough ground without bouncing and rolling improved operator comfort and safety. These benefits increase with the length of haul road, effectively absorbing all rough spots and allowing operators to maintain considerably higher average speeds – with or without a load. A hauler traveling at 55 km/h over rough haul roads was now possible, with minimal bouncing rolling or shaking.

2010 heralded the arrival of the F-Series, haulers that not only met the demanding standards set by the Tier 4i (US) and Stage IIIB (Europe) emissions legislation, but also featured a package of improvements in functionality, design, and maintenance.

Volvo Construction Equipment’s articulated haulers took another confident step forward in 2014, with the launch of the G-Series, which not only met the stringent Stage IV/Tier 4 Final emissions regulations, but also offered new features designed to improve comfort and productivity. The proven concept of oil-cooled wet multiple-disc brakes on the A35 and A40 models was also introduced on the A25G and A30G, reducing maintenance costs and increasing uptime, even on muddy or dusty job sites.

The larger models in the range were also offered with Volvo’s award-winning onboard weighing system, which allows for precise machine productivity monitoring, helping to optimize payload and minimize wear, tire damage and fuel consumption. The system monitors weight, relaying information to load software integrated into the machine’s electronics. Indicator lights tell the hauler operator, as well as the operator of the loading unit, whether the hauler is at part or nominal load or whether it has been overloaded.

The H Series, launched in 2016, is the culmination of 50 years of trusted Volvo engineering and innovation. Responding to a growing demand among customers for articulated haulers with larger payloads, the H-Series also welcomes the 60 ton (55-tonne) capacity Volvo A60H to the range – the largest articulated hauler of any brand to hit the market.

The Volvo A60H’s higher payload – a 40% increase on Volvo’s previous largest hauler the A40 – significantly lowers the cost-per-tonne ratio for hauler customers. The new size also offers a viable alternative to rigid dump trucks and construction trucks operating on soft, uneven or steep roads, allowing a similar amount of material to be hauled in a shorter cycle time. Good stability, comfort and high hauling speeds are ensured by the H-Series, thanks to matched drivetrain, automatic drive combinations (including 100% differential locks), all-terrain bogie, hydro-mechanical steering and active suspension.

Volvo remains the world’s leading manufacturer of articulated haulers. It invented the concept in 1966 and has been developing and building these machines ever since. The story has come a long way since the original 10 tonne ‘Gravel Charlie’, but with proven success over the years, the H-Series continues the tradition of delivering innovative technology, reliability, comfort and quality – not to mention low cost of ownership. 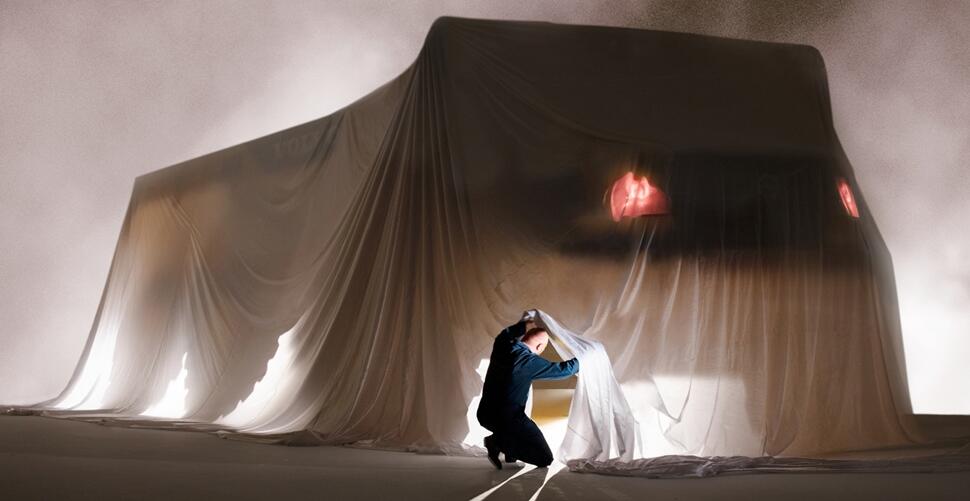 
The H-Series of articulated haulers from Volvo CE – life begins at 50.