Emphasising long term confidence in the market, visitors to this year’s Bauma 2016 exhibition in Munich will see Volvo Construction Equipment unveil several new flagship products – including the largest machines the company has ever made.

It’s hard to keep secrets under wraps. Especially when they are Big secrets – and doubly so when the secret in question is a giant 60 tonne class articulated hauler – the largest ever made by Volvo Construction Equipment (Volvo CE). The new A60H will undoubtedly be a star of the show – but is far from being the only Big News to be found on Volvo’s dual stands at Munich in April. Alongside the A60H will be a host of new excavators, wheel loaders, pavers, haulers and compactors – 16 product launches in total. And that’s just the machines – there will also be an entirely new approach to customer services, aimed at boosting uptime, fuel efficiency – and productivity.

More is more
While much of the company’s presence at Bauma 2016 is still a closely-guarded secret what is abundantly clear is the confidence with which the company is continuing to develop innovative, productive machines that help customers thrive in today’s ultra-competitive business. In fact, productivity is the key message of the show, under the banner of ‘Building Tomorrow’ alongside customers.

The largest ever articulated hauler is not the only flagship model being launched – several other large (and yet to be disclosed) general purpose products will also debut at the show, all of which will focus on meeting the needs of customers requiring maximum productivity.

Also on display at Volvo’s two stands (Indoor – C4:327 and Outdoor – FM510) will be an EW60E wheeled excavator, the EWR150E short radius wheeled excavator and EC35D, ECR35D and ECR40D compact excavators. Wheeled loaders are not forgotten, with the launch of the L50H, nor is road machinery, in the form of single drum rollers (SD75B, SD115B and SD135B), double drum (DD25B) and a new D-Series paver. And while the A60H may be the highlight of the articulated hauler range, there will be other new models and product updates on display in Munich.

When it comes to innovative customer services, look no further than the 8,700m2 of Volvo exhibition space. Under the banner of ‘Volvo Services’ the company will demonstrate its customer solutions aimed at machine monitoring, machine control, efficient fuel usage and repair & maintenance support.

History repeating itself
Although always looking towards the next innovation, Volvo has not forgotten its roots at Bauma 2016. Celebrating the 50th anniversary of Volvo’s popularisation of the articulated hauler concept, the company’s latest A60H will be joined by its great, great, great, great grandfather, the DR631 from 1966 – fondly known as ‘Gravel Charlie’. 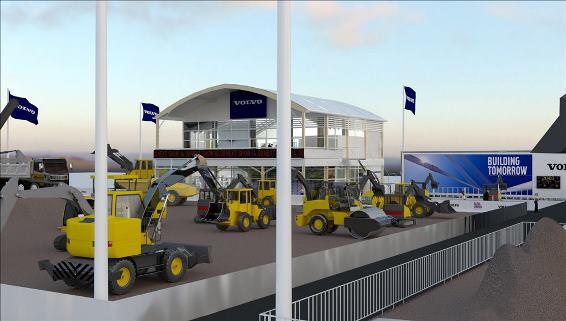 While the 2,300m2 indoor space is dedicated to static exhibits, multi-media displays, merchandise shop and salespeople on hand to offer walk-arounds, the 6,400m2 outdoor area (pictured above) is very much ‘action stations’. In addition to a regular machine show, complete with musical choreography, the action will be non-stop, including an attachments demonstration and a paving demonstration. As part of the Operator Club portion of the exhibit, visitors will be able to demonstrate their prowess at the controls of an ECR50D short-radius excavator, as they race against the clock to complete the challenging tasks set for them.

Martin Weissburg, the company’s President, will also host an international press conference during the show, in which he will highlight trading conditions, introduce new products and outline the company’s future plans.

Demonstrating the breadth of the Volvo Group, Volvo Construction Equipment is joined at Bauma 2016 by sister companies Volvo Penta, Volvo Financial Services and Volvo Trucks, the latter who will show its latest generation of construction trucks.

If you were ever in doubt, Volvo Construction Equipment comes to the industry’s biggest show having lost none of its confidence in its ability to deliver innovation, productivity and a closer working relationship with customers.